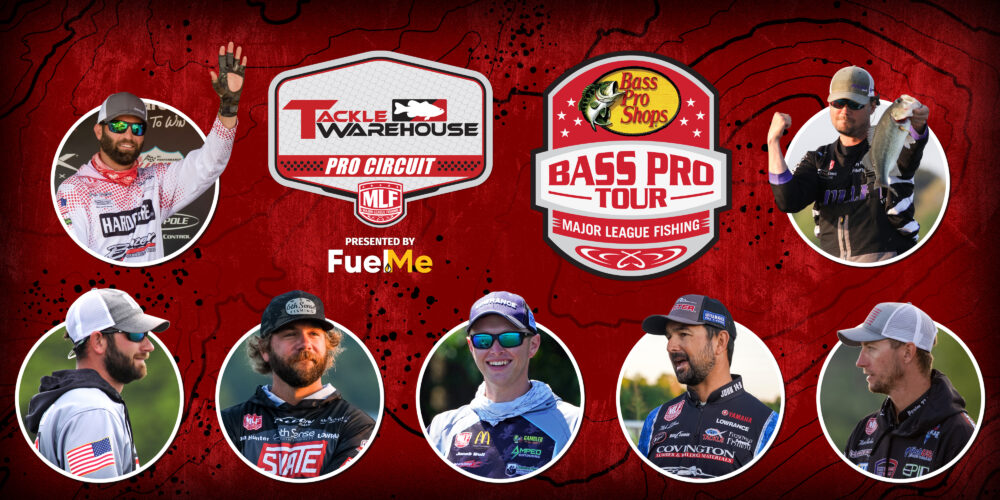 With the conclusion of the Tackle Warehouse Pro Circuit Presented by Fuel Me season at Lake Champlain, the newest qualifiers for the Bass Pro Tour are set. One of the big rewards of a good season on the Pro Circuit is a chance to fish the Bass Pro Tour, and each year the Top 10 in the season-long standings qualify for the BPT.

This year, Michael Neal, Justin Lucas and Dakota Ebare finished in the Top 10 in points and are already fishing the Bass Pro Tour. That means that the Bass Pro Tour will have as many as seven new entrants in 2023, depending on the decisions made by each of the new qualifiers. All the owners of stupendous seasons, the seven new prospects are Spencer Shuffield, Josh Butler, Matt Becker, Nick LeBrun, Mitch Crane, John Hunter and Jacob Wall. Here’s a look at the potential new faces on the Bass Pro Tour next season.

The son of longtime FLW pro Ron Shuffield, the younger Shuffield has been nothing short of amazing since his return to the Pro Circuit in 2020, finishing second in the points, 29th and third. An accomplished southern angler with Top 10 finishes all around the country, Shuffield looked good for Angler of the Year on the Pro Circuit this year until he stubbed his toe at the James River. But, he wrapped up the season strong at Lake Champlain, finishing 11th by LiveScoping smallmouth, which is one of his signature strengths.

Taking the AOY lead into the final event, Butler proved that he’s got what it takes to be a top-level pro in just his sophomore season. Though he perhaps needs a bit more seasoning up north, the Alabama pro has been successful all across the South, both shallow and offshore. Though there’s not much question that Butler will take the plunge into the BPT,  he’ll do it with less seasoning than some of his compatriots, and more in the transition from regular life to pro fishing. So, he’s certainly one to watch, but his career isn’t quite as set as his peers.

A superb northern angler and a longtime candidate for the BPT, Becker is rapidly filling the holes in his game, and even picked up two checks on the Tennessee River this year. Having settled into a heavy travel schedule in recent years, the Pennsylvania pro is a good candidate to fish both tours and excel in both formats. There’s no reason to expect anything less than excellence from him at the next level.

The winner of back-to-back events this year, LeBrun vaulted into the Top 10 in points in grand style, and really put together a historic season, all told. Finishing sixth in the points was a big departure from history from LeBrun, but he’s always shown flashes of greatness, with incredible success close to home in Texas and some very good events as far from The Pelican State as Champlain. Though his style is perhaps not perfectly suited to every-fish-counts events, LeBrun has proven pretty adaptable, and shallow-first pros like Andy Morgan and Randall Tharp have seen plenty of success on the BPT.

A dentist by trade, Crane has some big decisions to make in the coming months. Having excelled on the Pro Circuit, the BPT would be a big change for him, and it sounds like the idea of fishing both tours isn’t top of mind for Crane. Still, regardless of what the next phase of his fishing career looks like, Crane has proven to be versatile enough, and truly elite whenever he can throw a frog or a skirt up shallow.

Hunter fished his first FLW College Fishing event back in 2012, qualified for the Bassmaster Elite Series in 2015 and was back on the FLW Tour in 2018. Since then, Hunter has consistently done well in Opens, and failed to put together a complete season on the FLW Tour or Pro Circuit. That changed in 2022, as Hunter didn’t miss a check all year and made the save in every potential bomb. A versatile angler who is very at home with forward-facing sonar, Hunter has his career in a good place to fish both tours or just the BPT, and could definitely do well if he can keep his mojo going from this season.

At just 24 years old, Wall moved from Oregon to Alabama after qualifying for the FLW Tour in 2018. Now, just a few years later, Wall is coming off his second Top 10 finish in the points and has qualified for the BPT. Since committing to chasing pro fishing, Wall has proven that there’s nothing he can’t do, with big finishes to his credit on the Tennessee River, in Florida and on the Mississippi. Not quite as high-flying as some of the other names on the list, Wall has never looked overmatched on the Pro Circuit, and there’s no reason to think he won’t continue to blaze a trail of success in the bass world.