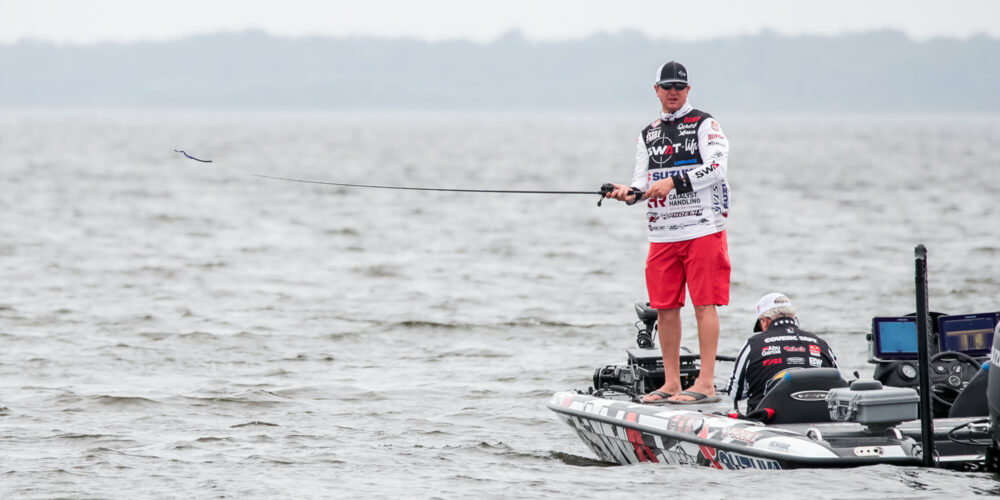 Anglers from Louisiana aren’t usually thought of as smallmouth bass-catching aficionados. The shallow water fisheries of the “Sportsman’s Paradise” state tend not to breed smallie hunters.

But that’s not the case with MLF pro Gerald Spohrer. The Louisiana native loves smallmouth bass fishing, especially when chasing them in the Great Lakes. Spohrer has a few tips and tactics that might open your eyes to the ways of a professional smallie hunter that never crossed your mind.

“I’m from Louisiana, but my best tournament finishes have been smallmouth waters, specifically Great Lakes,” Spohrer points out. “I’m so serious about learning as much as possible about smallmouth bass fishing in the Great Lakes – and up north in general – that I started living up north during the summer months since 2015. I stay up north all summer long learning to fish. Plus, it’s too hot for me in Louisiana during the summer.”

Spohrer’s favorite technique for hooking up with smallies is cranking. However, he isn’t a proponent of banging his plug off rocks and boulders.

“One thing I learned fishing up north is that smallmouth respond differently than largemouth to a crankbait retrieve,” Spohrer says. “Largemouth like the bait banging off cover. For smallies, I don’t want it to touch the bottom. I like it to be 3 feet or so off bottom. So for example, if I’m fishing 12 feet of water I’ll use a crankbait that dives 8 to 10 feet at the most. Smallies will usually come up to feed. They also suspend a lot, so I want it over their head a bit.”

“Typically, deep-running crankbaits are bigger,” Spohrer says. “The smaller crankbaits will generate more bites and have a better landing percentage than the larger, heavier baits. A good example of the smaller crankbait with light line working well happened to me during a tournament on Lake St. Clair in Michigan. I ended up with a Top 10 finish using a Damiki 200-sized crank. I fished it on 8-pound line and made long casts, throwing it out as far as I could. There were a lot of competitors in the same area and they weren’t catching them. That small bait getting down to 10 or 12 feet in 16 feet of water was key for my success.”

“You can have trouble graphing smallies, it can be harder than graphing largemouths,” he says. “I don’t idle around looking for bass, but instead baitfish. Often as you idle, the smallies will move away; this is when casting around with a crankbait becomes really productive.”

Crankbaits aren’t the only thing on Spohrer’s menu to feed smallmouth bass.

“When I’m in an area with a lot of bait and the crankbait isn’t working, I’ll switch to a drop-shot,” Spohrer says. “I’ll start pitching around 1/4- or 3/8-ounce drop-shot for casting. If I mark them and it’s a vertical presentation, I switch to a 1/2-ounce weight. I feel like if I see a mark, I want it to get to the fish as quick as possible and shoot it like a bullet right to their face.

“If I’m catching a ton of smallies, but want to switch it up to see about catching bigger fish, I’ll try a tube, football head jig or a Ned rig. In the Great Lakes you always have to be cautious about zebra mussels damaging your line, but sometimes the bigger baits are really productive.”

In addition to crankbaits and soft plastics, Spohrer always has a jerkbait, topwater and spinnerbait ready to go; earlier in the year, a fluke during the postspawn. Also, one more finesse bait that few anglers talk about: the marabou jig.

“One lure I find really productive, especially if the bite is tough and you’re searching for bass, is a marabou jig,” Spohrer admits. “I simply cast out a tiny black marabou jig and reel it through the water column. When I say ‘tiny,’ I mean a 3/32-ounce jig. It’s basically a crappie jig.

“You fish it like a spybait over sandy flats and cover when the bass are cruising around. The difference is that a spybait can turn the fish off and the jig rarely gets turned down.You have to fish it with a longer limber rod. I load my spinning reels with 15-pound Seaguar Smackdown braid and use an 8-pound fluorocarbon leader. It is a tough lure to cast, but if you can bomb it around I believe it can be one of the best smallmouth catching baits there is.”

“One of the main things I look for when fishing the Great Lakes are shoals,” he says.”The smallies use them as current breaks. Sometimes they’re right on top, sometimes edges, sometimes current seams. The highest percentage targets are boulders or bigger rocks. They’ll move around a big shoal all day, but a big boulder will almost always hold fish. The big boulders are my favorite thing to fish. But, if there are no big boulders, I’ll look for another cover, like some grass with a hard edge.”

There are a couple more points to think about while chasing smallies on the Great Lakes: Be prepared to move and keep your approach simple.

“One thing I’ve learned over the years, especially with the forward facing sonaras is how much smallmouth bass swim around,” said Spohrer. “I’ve seen bass move 75 feet to another location in the time it takes me to catch, weigh and release a fish. Make sure to be prepared to move throughout the day.

“Also, use what works,” Spohrer says. “Keep your colors pretty basic and use what you have confidence with. Pretty baits are made to catch fishermen. Just because it looks like the real thing doesn’t mean they work. The plain old ones like green pumpkin colors, well, they flat catch fish.”