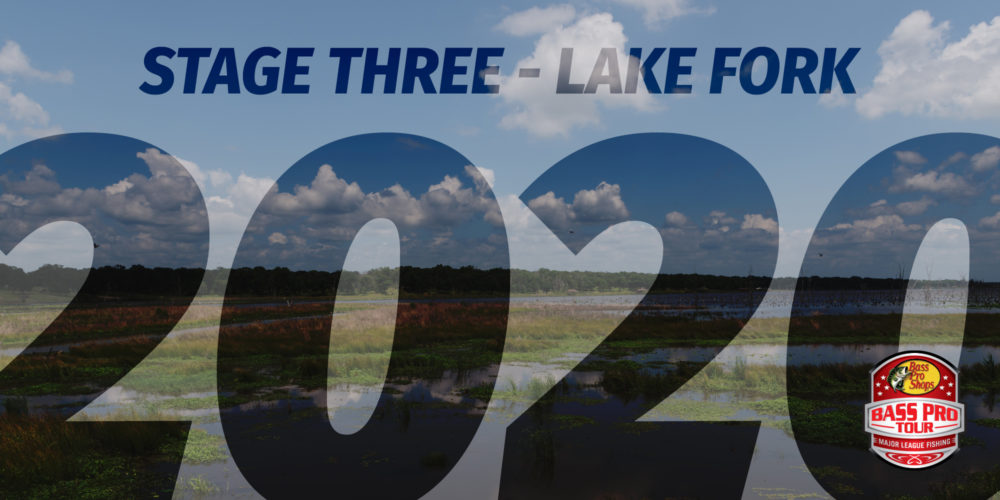 The Bass Pro Tour lands on one of the best big-fish lakes in the country when it goes to Lake Fork, Texas for Stage Three. Photo courtesy of Wikimedia/Public Domain
November 11, 2019 • Sean Ostruszka • Bass Pro Tour

EMORY, Texas – They say that everything is bigger in Texas. The 80 MLF pros fishing the Bass Pro Tour are set to find out just how true that mantra is come March 13-18, 2020.

Long revered as one of the best big-fish lakes in the country, Texas’ Lake Fork has only become a destination for major tournaments within the last decade or so (more on that later); and even then, the tournament number has been limited. Yet, whenever a tournament has arrived, it has not disappointed, and the third stop on the 2020 Bass Pro Tour schedule should be no exception.

“It’s all going to depend on the weather this winter and spring, but if things get right, with the way this lake is and has been fishing, we’ll bust every record that’s ever been set,” says MLF pro Jeff Sprague, who lives near Lake Fork.

Plenty of lakes in Texas have giant bass, but what makes Fork unique is something usually reserved for walleye or redfish fisheries: a slot limit.

“That slot limit may be the most important thing that has contributed to Lake Fork becoming all that it is,” says Sprague of the slot limit, which doesn’t allow an angler to put a bass in his or her livewell measuring between 16 and 24 inches. “It protects (the fish), and it has allowed Lake Fork to really flourish.”

Considering that the majority of bass tournaments rely on anglers putting bass precisely in that range in their livewells, it obviously made it near impossible to host a major tournament on the fishery.

Fortunately, exceptions have been made in the past. Then again, the MLF format of immediate release doesn’t have to worry about it at all.

Instead, all the pros will have to worry about is contending with the “uncountable” number of 4- to 7-pounders that live in the lake, according to Sprague. Oh, and of course, the BIG girls.

“If the weather is good, we’re going to see multiple fish over 10 pounds caught during the week,” says Sprague. “Multiple! Heck, there are a lot of 8- to 10-pounders that would fall in the slot. We have Florida-strain fish that are short, fat, healthy and full of eggs. A mid-sized 8-pounder that would fit in the slot may actually weigh 10 pounds because of how healthy the fish are, especially at that time of year.”

Most any pro will tell you, as prolific as Florida-strain bass can be size-wise, they’re just as well-known for their sensitivity to weather.

Now, on most Florida lakes, relocating temperamental fish after a cold front is not too difficult, as the lakes are not too big (outside of Lake Okeechobee), and they usually just hunker down in the same places. Not so much on Fork, where they have 27,690 acres to roam.

“I’ve seen these fish go from the bank all the way out deep in a day to just sit and suspend,” says Sprague. “There’s a lot of water and places for them to hide.”

That could mean that locals like Sprague should have an advantage, knowing where bass may roam if they get moody. The time of year, being around the spawn, will probably negate much of that advantage, though.

“The fish are going to be everywhere to be caught,” says Sprague. “If we have a long, cold winter and spring, then we’ll be in full-prespawn mode, but if it warms up quick, it will be a spawning tournament. Then I have no advantage. With this lake, certain sections just become hot, and if a guy just happens to be there when it turns on, there’s nothing anyone else can do.”

As Sprague said, the tournament will be won or lost by how the field reads and adapts to the weather.

If it’s a cold spring, watch for anglers to focus on the prespawn with reaction baits, or slowing down and camping on spots where fish will hopefully be coming to them on their way to spawning grounds. But if it’s warm and the spawn is on…

“It could get stupid good,” says Sprague.

What does that kind of “good” look like? Well, Keith Combs cracked more than 110 pounds in the 2014 Toyota Texas Bass Classic on Lake Fork. That was with 15 fish over three days. Yes, he AVERAGED a fish over 7 pounds for his best five, and that doesn’t include all the 4s, 5s and 6s he tossed back that didn’t help.

And here’s the real kicker: that tournament was in May, long after the spawn, when the females’ egg-laden bellies will make them that much heavier.

“This tournament, with the format and coverage, the time of year; it’s going to really showcase what this lake has to offer,” says Sprague.