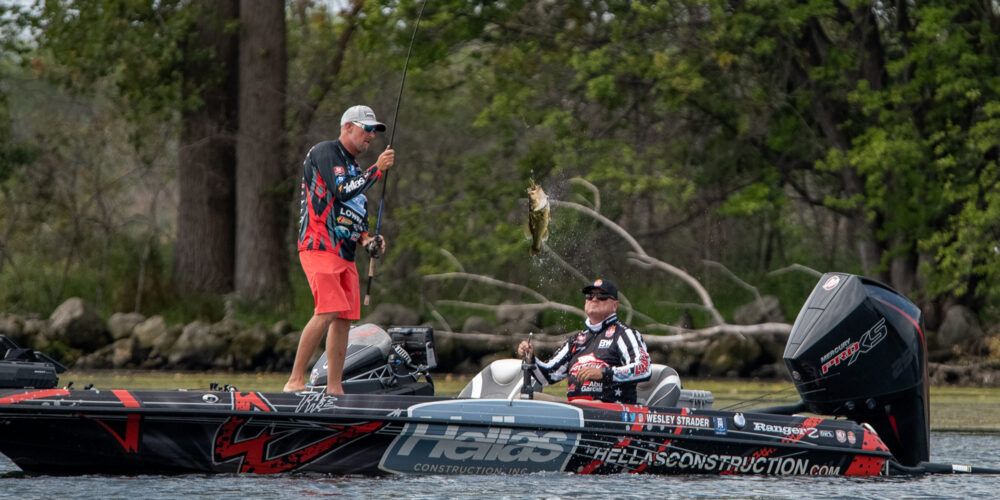 ST. CLAIR SHORES, Mich. –The second day at the CarParts.com Stage Seven Presented by Covercraft on Lake St. Clair produced a much different story than Day 1. Gusty winds altered both the condition of the playing field and the game plan of anglers fishing Group B, resulting in a much lower catch total and collective weight from the field.

There were some solid performances, but the day belonged to Wesley Strader. The Tennessee pro grabbed the lead 20 minutes of competition with a morning flurry and only briefly relinquished the top spot to Fred Roumbanis late in the day. The bulk of the day saw Strader perched firmly on top of SCORETRACKER® as he racked up 34 fish for 93 pounds, 4 ounces.

Fighting Through the Winds

The high winds that were forecasted for the Detroit area arrived mid-morning and built gradually throughout the day. The anglers fishing out on Lake St. Clair proper saw waves that made it downright difficult to stand, much less fish effectively while anglers fishing more protected areas appeared to be on a different fishery altogether with flat calm conditions.

But both groups caught bass with a host of different techniques.

Day 1 saw three anglers surpass the 100-pound mark, but nobody was able to accomplish that on Day 2. While it took 36-5 for Keith Poche to hold down 20th place in Group A on Friday, that cut line was just 22-13 on Saturday, with John Cox currently holding the final Group B position that will advance to the Knockout Round.

Overall, there are much tighter weights down the standings for Group B, which should lead to an exciting finish to their Qualifying Round as they jockey for advancement when they return to the water on Monday.

The day started quickly for Strader, and rather than moving around in the rugged water conditions, the Lew’s pro decided to stay put in his starting area to maximize his time. Strader did it targeting largemouth on one of the best smallmouth bass fisheries in the world.

“I looked at the wind forecast and figured there’s no way I could get out and catch smallmouth in that (weather),” he said. “With a 2-pound minimum, I knew that largemouth can compete in this tournament.”

Strader is targeting shallow grass with some rocks mixed in, cycling through his main area multiple times, hoping to capitalize on small bite windows. He’s mixing it up between a Z-Man Evergreen Jack Hammer ChatterBait paired with a Zoom Z-Swim, punching, and fishing a Zoom Zlinky on a Neko rig.

“I found some holes in the grass with a rock pile and the fish bite really good early in the morning with reaction baits and then you have to go slower later in the day,” Strader said. “I have a couple more areas, but I didn’t go because it would have beat us to death to get there with the waves and you never leave biting fish to find fish.”

While Strader leads comfortably after the first day, Fred Roumbanis and Zack Birge also had solid days and are the only two anglers within 20 pounds of Strader.

Roumbanis ended up with 29 bass for 81 pounds, even after losing several quality bass with an MLF NOW! camera there to see it all.

“It was an amazing day and to still be in second after losing all those fish, I can’t complain at all,” Roumbanis said. “I think I may have finally broken the curse this lake has had on me for so many years. I may have enough after today to qualify for the Knockout Round, but I’m going to give it all I’ve got and try to chase down Wesley.”

Birge is just over 5 pounds behind Roumbanis with 27 bass for 75-14 and was pleased with his day.

“It was a good day with some adverse conditions with big waves and a lot of wind,” Birge said. “I did it how I like to fish and to end up in third place; I’ll take it. If we have lighter winds when we come back out here, I’ll be able to fish more areas and fish some of my better areas.”

Coming into this event, Ott DeFoe held a 12-point lead over Jacob Wheeler in the Angler of the Year race. After one day, Wheeler sits in second place in Group A, and DeFoe wound up in ninth after his group’s first day.

“I fished so hard with a lot of pressure riding on today as it’s all coming down to this event,” DeFoe said on MLF NOW! “My goal is to make the Championship Round because if I can do that, it’s over and Jacob won’t be able to catch me.”

It’s too early to tell what will happen in the race after just two days of fishing, but the picture will get a little clearer after Wheeler competes on Sunday. If he wins his group and automatically qualifies for the Championship Round, the pressure will be on for DeFoe when he fishing his second qualifying day on Monday.

Group A will return to the water Sunday morning for the right to advance to the Knockout Round. It will be another reverse in weather conditions as the winds are expected to subside what should be a calm, beautiful Sunday on the water with highs in the low 80s and winds of less than 10 miles per hour.