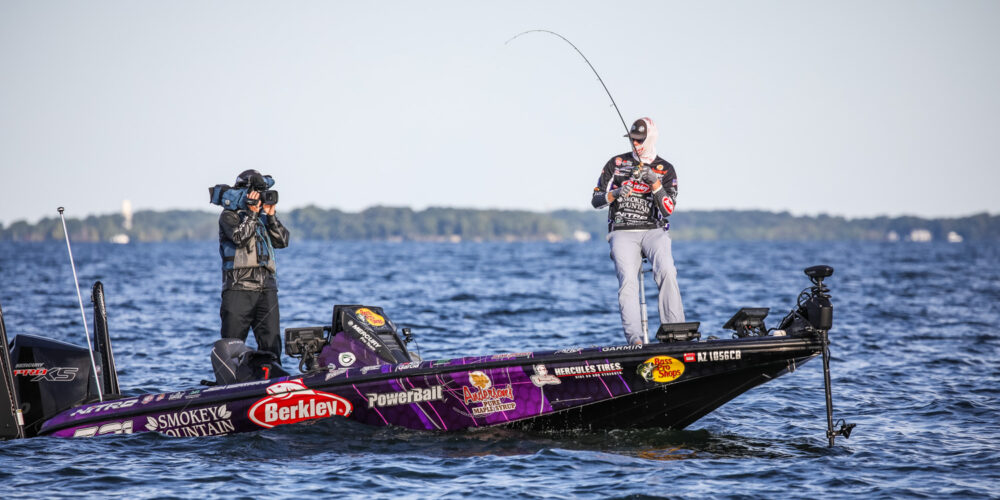 SANDUSKY, Ohio – As he considered his game plan before the start of Thursday competition at the FLW Pro Circuit Super Tournament out of Sandusky, Ohio, MLF pro Alton Jones Jr. was matter-of-fact about his options.

Jones – who dropped 21 pounds, 13 ounces on the scales on Day 2 to climb into third place (just 8 ounces behind leader Justin Lucas) – spent the first two days on Lake St. Clair, committing each day to the two-plus-hour run across Lake Erie. But the wind forecast for today (afternoon gusts approaching 20 mph) had the Texas pro shaking his head before takeoff on Thursday.

“That run is going to hurt,” Jones said. “I know I can get (to St. Clair), but that run back is going to be gnarly. But if I don’t make it, I’ll have to fish for largemouth, and that’s basically throwing in the towel on this fishery.”

Case in point: FLW angler Dakota Ebare broke multiple rods in his rod locker making the run to St. Clair, and Jon Canada (who sacked up 24-8 on Day 2) broke two graphs halfway across Lake Erie before turning around.

Day 3 at the FLW Pro Circuit Super Tournament out of Sandusky, Ohio can be viewed live on the FLW Live stream on the homepage of the FLW website.