The Pattern Inside the Pattern: How Wheeler’s Big-Fish Approach Paid Off at Lake Travis 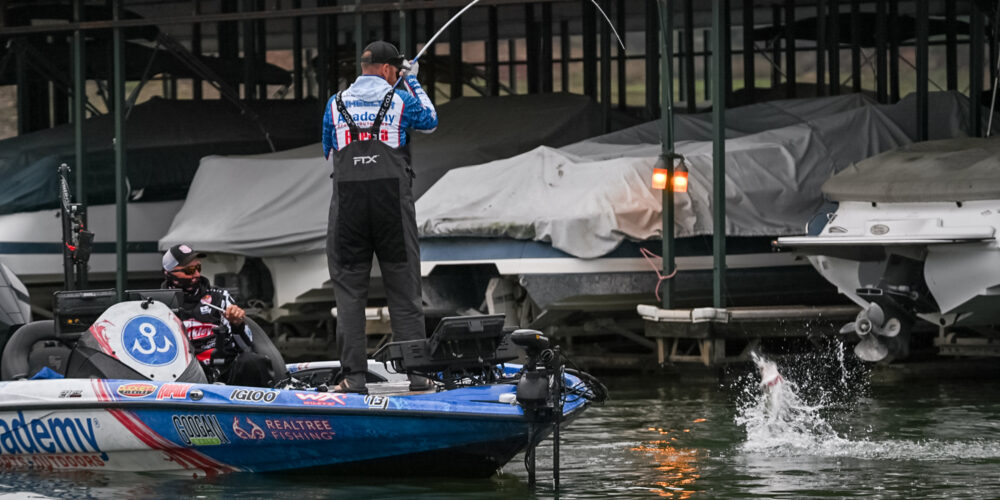 Although the results of the Championship Round of the Bass Pro Tour Stage Two might not show it, Jacob Wheeler put on a dominating performance on Lake Travis.

Wheeler beat the hard-charging Bobby Lane by a scant 2 ounces on the final day of the event, but a closer look at the results show that Wheeler had the bigger bites dialed in better than every other pro throughout the course of the six-day tournament on the central Texas impoundment of the Colorado River.

At first blush, it appeared that Wheeler simply ran docks, pitching around a white or shad-colored vibrating jig and a white swim jig; however, there are subtleties to his game that made all the difference on Travis.

“Lake Travis is a fun lake to fish, but it’s tough to figure out,” Wheeler admitted. “There are a ton of 1-pounders out there, but a 1-pound, 8-ounce bass or larger were hard to come by. Sure, Travis can produce monsters like the 15-pounder that was caught there earlier this year, but in general, those mid-size quality fish aren’t easy to find. But I figured them out, at least in the morning.”

The morning bite was key for Wheeler’s success at Stage Two, but not due to a shad spawn, which anglers and analysts alike initially thought would have a major impact.

“The shad spawn didn’t play a part in my success,” Wheeler confirmed. “There wasn’t much of (a shad spawn). There were bluegill getting hunted down, but the shad were really not a big deal. A bass would need to swim around with its mouth open all day to put any weight on with those shad, like a whale eating krill.”

Once Wheeler knew that the shad spawn wasn’t a factor, he didn’t waste any time looking for it. Instead, during practice, he figured out that docks in the upper 15 miles of Lake Travis were where he needed to fish. He targeted water 12 feet and shallower, focusing on the top 5 feet of the water column to hook the largest fish.

“Once the tournament started, I knew where I thought the best area was located for me to win,” Wheeler said. “The upper lake docks – and a specific few of them in about an 8-mile stretch – was where I caught my fish. I noticed during practice I could go down lake and catch more numbers, but they were smaller.

“Also, if I used a worm and the bait sank, it seemed the big fish never got it, just the little ones. All the big fish I caught were way up in the water column. I mean, I think they could see the bait coming, and right after it hit the water, they hit it.”

The results are hard to dispute: Wheeler’s first fish of the tournament was 4 pounds, 15 ounces, and he landed eight fish at 3 pounds or better on Day 1 (including four over 4 pounds).

“On the first day, I think my average fish was 3 pounds, 5 ounces – that’s huge for Travis,” Wheeler said. “Once I figured out the fish positioning, I made a few more adjustments to my line, bait progression, and really made sure my casting was precise. I eliminated water and ran some new stuff, because other (competitors) were also fishing the water I was fishing.”

Wheeler’s key bait was a vibrating jig, either white or translucent/shad colors, with a white minnow-style trailer. The other big bait for Wheeler was a white jig with a white Googan Baits Bandito Bug trailer.

“The vibrating jig and the Bandito Bug on a jig were what produced most of my fish,” Wheeler said. “I did catch a few on a plopper-style topwater between docks, but the jigs were the key baits. I had to make a line adjustment after the first day, though. My 17-pound Suffix Fluorocarbon, what I mainly use when I’m throwing a ChatterBait, was getting nicked and cut by the zebra mussels. Those things were everywhere, like little razor blades ready to cut your line. I switched to 20-pound, but probably could’ve gone heavier.”

While some anglers were targeting largemouth on beds further down the lake, Wheeler believed that most of the bass were done spawning where he was fishing. The docks served as a postspawn transition area, and the perfect location to catch bass on Travis.

Wheeler didn’t find a magic set of key docks, he just progressed through his 8-mile stretch, focusing on precision casts.

“I needed to be precise with my casts,” Wheeler confirmed. “I fished plenty of docks, but had to make high-percentage casts. If your cast was off, your line could get cut up by the zebras. I’d often make three or four casts into a 6-inch gap to get them. If I was getting hung up too much, I’d put down the vibrating jig and throw the white jig to get the bait further back to the fish.”

Wheeler’s rod and reel combo was an important tool for him to execute his precision casting approach.

“If I wasn’t able to get my bait exactly where I needed it, I never would’ve won,” Wheeler said. “Typically, when I’m skipping boat docks with a vibrating jig, I’ll use a 7-foot rod. It allows me to be a little more accurate. I’d suggest that (rod length) to anyone skipping docks. Then, once you get to the point of being good at it, you can move to a 7-foot, 3-inch rod to get a little more leverage. I used a medium-heavy Duckett rod with a moderate fast tip and a parabolic action.”

The second part of his combo, the reel, made his job easier due to the free-wheeling nature of his reel, a signature-series Paradigm reel from Duckett Fishing. Wheeler uses the 100 size and varies the gear ratio from a 6.8.1 for offshore fishing and a 7.5:1 for tight quarters like dock fishing on Lake Travis.

“The reel is huge if you want to get way back where nobody else does,” Wheeler said. “I need a super free reel. You’re gonna get backlashes because the spool is so free, but it allows you to make the casts you need to. The reel spool is free as all get-out, it casts like a rocket.”

When NOT Winning Pays Off

In addition to the early-morning success, Wheeler believes that he benefitted from NOT winning his Qualifying Round and receiving the automatic bid to the Championship Round.

“Some of my winning was due to me being fortunate and being at the right place at the right time: Some docks had bigger bass, and a big key was knowing which docks to fish,” Wheeler said. “I was fishing the same docks as Andy Montgomery. We’d see each other all day. If I would’ve won the Qualifying Round, I don’t believe I would’ve won the tournament. I wouldn’t have been there during the Knockout Round, sharing water with Andy. He would’ve beat those docks up all by himself, and by the final round, they wouldn’t have had enough scorable fish left.”

According to Wheeler, some lakes just jibe with an angler. Lake Travis is one of those for him.

“I’ve done well on Travis,” Wheeler said. “It’s a tough lake, but I love it. Though the line management issues this time were like nothing I’ve ever experienced due to zebra mussels, I still love the lake. Sometimes you just jibe with a lake, get its rhythm. And a big shout out to Bobby Lane, that was an epic comeback. I felt the pressure of SCORETRACKER®. It was crazy stressful, but I love it. The intensity and excitement are like nothing else in this sport.”