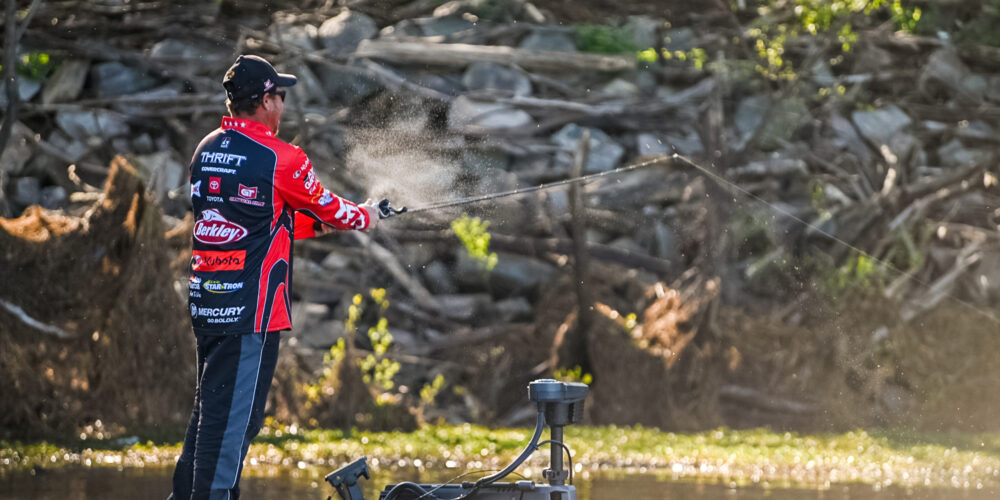 RALEIGH, N.C. – The fishing wasn’t as easy on Falls Lake as it was on Jordan Lake for General Tire Heavy Hitters Presented by Bass Pro Shops. However, the anglers in Group B were still able to find some North Carolina studs on a stubborn Falls Lake for their second qualifying day.

With Bryan Thrift once again leading the pack, nine other anglers from Group B will join him in advancing to the next stage of competition—the Knockout Round on Shearon Harris Reservoir. Thrift will move straight to the Championship Round with Group A’s winner, Fletcher Shryock, while the nine pros from Group B join the nine advancing pros from Group A on Tuesday.

While the race for the Knockout Round went down to the final minutes of the day, another race waged on—the big bass in Group B and a $25,000 check. Dave Lefebre was able to jump ahead of Ott DeFoe’s 7-pound, 3-ounce largemouth with an 8-3, the only 8-pounder caught on Falls Lake in two days of competition.

Thrift Breezes to Another Championship Round

Thrift is moving on to his fifth Championship Round appearance since joining the Bass Pro Tour in 2020. The North Carolina pro won Group B after catching 18 bass for 62-6 in his two days on Falls Lake. Thrift entered Monday’s contest with a more than 6-pound lead over second-place Stephen Browning thanks to an impressive display of frog fishing. However, his second day on Falls wasn’t as productive.

“My original plan was to get some bites with a frog like I did on Saturday, but that didn’t work out,” Thrift said. “Luckily, I had a backup plan to fish offshore rock piles in the afternoon and it paid off. It was tough out there, but I did what I needed to do to move on.”

Thrift now becomes the first angler in Bass Pro Tour history to earn an automatic spot in the Championship Round twice. Thrift won his Qualifying Round during Stage One in 2020 on Lake Eufaula in his Bass Pro Tour debut. This will be his second-straight Heavy Hitters Championship Round after finishing second to Jordan Lee in 2020. But he will try to win his first Bass Pro Tour event on a lake he’s never even seen before.

“I spent all of my three days of practice on Falls just because I didn’t have a good practice there at all,” Thrift explained. “I knew I wasn’t even going to make it to Shearon Harris if I didn’t do well on Falls. Luckily for me, I get to skip at least one day on Shearon Harris and just try to make sense of it for one day instead of two.”

Dave Lefebre isn’t just moving on to the Knockout Round, but also earns a $25,000 check for landing the biggest bass in Group B, weighing in at 8-3. The Pennsylvania pro bested Ott DeFoe’s 7-3 for the big bass bonus, and now takes his earnings onto the Knockout Round with a chance for more.

Lefebre was able to land that $25,000 fish thanks to an adjustment he made after losing a 6-pounder on a 13 Fishing Trash Panda the first day,

“I went home that night and increased my rod size to a 13 Fishing 7-foot-6 with 20-pound test for my Senko rod,” Lefebre revealed. “I had a 3/16-ounce Fishon tungsten weight and a 5-inch Senko in green pumpkin with red and black flake. I wouldn’t have been able to catch that fish if I didn’t make those changes.”

Lefebre was just getting his third and final period on Falls Lake underway and was working to maintain his spot inside the top 10. That’s when he pulled up to that same tree where he thought a 6-pounder lived. He made about six pitches to the tree, got the fish to bite the Senko, and didn’t realize how big it really was until it got to the boat.

“When I got my hands on it, I immediately flipped it over and saw the belly on that thing,” Lefebre said. “I thought to myself, ‘Oh my gosh, there’s no way it’s just 6 pounds.’ That fish not only got me the big bass, but also secured my spot in the next round. It was a really huge moment when I needed it.”

Watch all three periods of the Knockout Round during the MLF NOW! live stream beginning at 7:15 a.m EST on Tuesday. Watch for FREE on MajorLeagueFishing.com, the MLF app, or the MyOutdoorTV app.