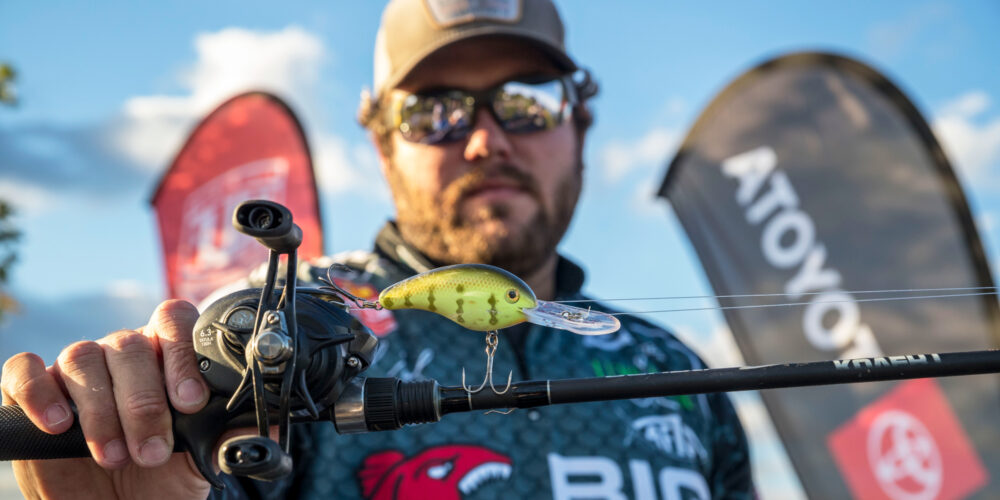 The Top 10 pros used an interesting mix of patterns and baits to land themselves at the top of SCORETRACKER®. Photo by Phoenix Moore. Angler: Michael Neal.
September 18, 2021 • Tyler Brinks • Bass Pro Tour

ST. CLAIR SHORES, Mich. – The pre-tournament intel going into Bass Pro Tour Stage Seven was that drop-shots and crankbaits would be big players on the waters of Lake St. Clair, Lake Erie, and the Detroit and St. Clair rivers. Those baits were indeed well represented in the final 10 anglers’ patterns, but the fishery’s largemouth also had a solid showing, with two anglers advancing to the Championship Round punching and fishing around shallow vegetation.

It was an interesting mix of patterns that proved to be productive in many different locations inside the tournament’s sprawling boundaries. Here’s how the Top 10 caught ’em.

With the most dominating win in Bass Pro Tour history, Michael Neal did all of his damage in a section of Lake Erie at the mouth of the Detroit River.

“It was about a ¾-mile stretch from Point A to Point B with a grass flat,” Neal said of the winning area. “The key was any differences (in the bottom), whether it was a high spot, rock, or just something different in the grass. It averaged 12 feet deep, and I caught some as shallow as 10 feet and as deep as 14 feet.”

Alton Jones Jr. fished close to the tournament takeoff all tournament long, targeting flats in 12 to 15 feet of water.

“I burned three gallons of gas all week and was in sight of the takeoff the entire time,” he said. “I was fishing scattered grass and focusing on the bare spots and clumpy stuff. It was a one-two punch between a drop-shot and a crankbait, depending on the weather.”

When fishing in calmer seas, he relied on a Geecrack Revival Shad and mixed in a Berkley PowerBait MaxScent Flat Worm, targeting individual fish he saw on his Garmin Panoptix LiveScope.

“You could watch them and get them to react when it was calm and the key was staying away from them because it was shallow and you couldn’t get on top of them,” Jones said. “During high winds, I cranked because that’s all you could do. I was fishing a Rapala DT 10 and DT 14 in perch colors and switched it up based on the depth.”

Local angler Scott Dobson qualified for this event thanks to his performance on the Pro Circuit’s final stop and he made the most of the opportunity. Dobson has a sterling record on the Lake St. Clair, with seven Major League Fishing wins, and the Michigan pro leaned on that experience at Stage Seven.

“The key for me was narrowing down my rotation of spots,” he said. “I focused on the mouth of lower Detroit River where it dumps into Lake Erie because that’s where the shad migrate this time of year. I kept all of my spots in a two-mile radius and fished seven or eight spots and could rotate through them to find active fish.”

Keying on shallow flows with clean spots and baitfish present, he relied on a host of different lures this week.

Adrian Avena stuck with Anchor Bay on Lake St. Clair and relied heavily on his Lowrance Active Target with a drop-shot or Ned rig.

“I would scan around and wouldn’t make a cast until I saw (a fish),” he said. “I was hunting individual fish in 8 to 10 feet of water. The area was about the size of a football field and had some patches with cabbage and a nice, sandy bottom. I pretty much hunkered down in that area the whole tournament.”

Avena drop-shotted a Berkley MaxScent Flat Worm in either green pumpkin or black on cloudy days and lighter shades when the sun was out.

“It was predominately the drop-shot for me, but I also caught some on a ¼-ounce ball head with a Berkley PowerBait MaxScent Lil’ General,” he said.

The new Bass Pro Tour Angler of the Year secured that title while fishing both Lake St. Clair and the Detroit River. He alternated between the two locations based on the conditions.

“It came down to weather dictating where I went each day,” Wheeler said. “If it was calm, I wanted to stay on St. Clair because that’s where I thought I could catch the most weight. I also found some little key drifts I could get bites on in the river and also current related stuff on the bank when it was windier.”

On St. Clair, Wheeler relied heavily on his Lowrance ActiveTarget with a Googan Baits Rattlin’ Ned in green pumpkin goby and fluke-style baits on a drop-shot.

“I was targeting 14 to 18 feet of water in certain zones that had baitfish in the area,” he said.

When fishing in the river, his primary tool was a ½-ounce green pumpkin jig with a blue baby 3.3-inch Googan Baits Bandito Bug.

Fishing the mouth of the Detroit River in Lake Erie, Dudley targeted the 12- to 18-foot zone and looked for slight differences in the bottom composition.

“I was targeting holes in the grass or where there were patches of rocks in grass flats,” he said. “Finding little differences or a mix was the biggest thing.”

Dudley caught his fish with green pumpkin and brown back Berkley MaxScent Flat Worm fished on a drop-shot.

Roumbanis fished all over in practice but found his tournament area by paying attention to bird activity near the mouth of the Detroit River in Lake Erie.

“I knew coming into this event that the mouths of the rivers would be a big deal since that’s where all the bait goes in the fall,” Roumbanis said. “I saw all those birds diving in the area and put my trolling motor down and started fishing.”

Once he began the tournament, Roumbanis paid close attention to how the fish acted based on what he saw on his Garmin Panoptix LiveScope.

“If they were sitting on the bottom and not moving, I’d throw a drop-shot,” he said. “If they were chasing my bait down and following it back up, I knew I could get them to eat a reaction bait.”

His biggest weapon was a ½- or ¾-ounce spinnerbait in natural baitfish-imitating colors the first two days. When drop-shot fishing, he used green pumpkin and shad-imitating plastics; Roumbanis also caught fish on deep-diving crankbaits as the event wore on.

Sticking near the takeoff on Lake St. Clair, Klein caught nearly all of his bass with a crankbait fished very quickly.

“I call it ‘speed reeling,’ and I was fishing a Berkley Dredger 14.5 in a custom color with a pearly belly and green sides,” he said. “I was hunting and looking for them and the key was to keep the bait as far away from the boat as possible, so long casts were key. Then, I’d reel it as fast as I could and would also make a lot of directional changes by sweeping the rod.”

Klein described his primary areas as a migration area for smallmouth in 12 feet of water.

“On St. Clair, you need to find all of the right ingredients and right mix of grass, current, and baitfish,” he said.

Morgan decided to target largemouth after looking at the weather forecast for the event,  and it paid off handsomely. Morgan had the most weight during the Knockout Round and secured a Top-10 finish almost exclusively with largemouth bass.

“I saw the extended forecast and saw it was going to blow, so I decided to see what I could find to try to scrape out a check with largemouth,” he said. “Plus, I have zero knowledge of the American side of St. Clair because I’ve only ever fished the Canadian side.”

Morgan found four to five spots in the Detroit River with matted grass in 2 to 5 feet of water. He punched the mats with a 1 ½-ounce weight and a Zoom Z-Craw Jr. in black and blue and South African Special.

“If you could find a mat thick enough and fished it long enough, you’d get a bite,” Morgan said. “I didn’t know it at the time, but the wind was the deal and got them to bite better because it was harder when it wasn’t as windy. That’s pretty much what I did the entire time, but I did catch a few smallmouth and largemouth fishing some docks.”

Like fellow Tennessean Morgan, Wesley Strader went all in on the largemouth bite. It was enough for him to win his group’s Qualifying Round and advance straight to the Championship Round.

“I decided to largemouth fish based on the weather forecast since I knew it was going to blow,” he said. “I focused on areas that would be protected from the wind.”

He found an area near the mouth of the Detroit River in Lake Erie that included matted grass mixed with holes in the grass that had rock.

“It was a good-sized area, and I fished it all day long each day and only made two passes through it,” he said. “I punched the mats around the hole in the grass and also caught them with a ChatterBait and Neko rig with a Zoom Zlinky in watermelon red flake.”

Strader’s punching setup included a 1 ½-ounce weight, 5/0 Trokar TK130 flippin’ hook and a watermelon/green pumpkin laminate beaver-style bait. Strader used two Z-Man Evergreen Jack Hammer ChatterBaits in the 3/8-ounce size. One was green pumpkin with a tilapia-colored Zoom Z-Craw Jr. trailer and the other was in crystal shad that he paired with a Zoom Z-Swim for the trailer.