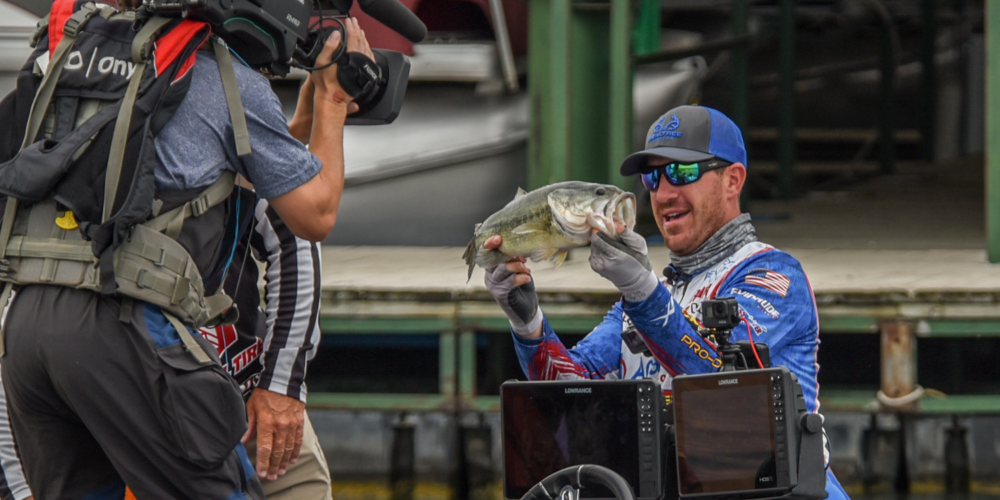 It was Aaron Martens for the win last week at the Bass Pro Tour Berkley Stage Six Presented by TrueTimber. Martens’ offshore mojo on Table Rock Lake was strong, and proved to be the final nail in the coffin for his fellow competitors.

But, it was a combination of the shad spawn bite, topwater fishing, and offshore skills that brought all of the Top 10 anglers to the Championship Round. Check out what they used.

Martens used a combination of drop-shot, spinnerbaits, and swimbaits to take home the Stage Six trophy and $100,000 check.

“The Roboworm Sculpin was the key drop-shot bait for me,” Martens said. “I used the Aaron’s Magic color along with a variety of shad colors. I fished it in the offshore bushes. I used 10-pound Sunline braid and an 8-pound Sunline FC Sniper leader. I tied up a No. 2 Gamakatsu G-Finesse Heavy Cover hook and a ¼-ounce Picasso drop-shot weight. I Texas-rigged the Sculpin.”

“I was fishing the shad spawn offshore in the bushes earlier in the day,” Martens said. “That was when I used the spinnerbait and swimbait.” Martens used Enigma rods and Shimano reels.

Both methods were fished with a Lew’s HyperMag reel and a Lew’s Custom Pro rod.

Vinson’s topwater bite was perhaps his biggest player in the competition week, but he also weighed several fish on a handful of other baits.

His topwater go-to was a Heddon One-Knocker® Spook®, which he threw on an MHX MB84 7-0 medium heavy rod and a 7.0:1 reel spooled with 20-pound Seaguar Rippin fluorocarbon.

“I basically did what Andy Montgomery did with a jig,” says Rose. “I fished a white Strike King Skipping Jig with a pearl Strike King Menace Grub on 20-pound Seaguar InvizX line around docks and bushes for the shad spawn in the morning. I had about eight spots and would run and gun, focusing on the little docks.”

After the first period, Rose shifted to offshore fishing with a ⅜-ounce jig head and a Rage Swimmer using 10-pound Seaguar InvisX. Most of the day during the Knockout and Championship Rounds, Rose fished the white jig.

“I did have a little something different during the Elimination Round, stated Rose. “I found some deep bedding bass during practice by the dam. Everything was falling apart a bit for me, and I knew I had to weigh another 10 fish or so. Those bass were still there, and I caught them using a ⅛-ounce shaky head and a worm.”

“A buzzbait and a jig,” said Wheeler with a laugh. “Seriously, I threw my Accent Signature buzzbait. I used the white one with a generic white toad as a trailer. It really caught them. It’s a great buzzbait. My jig was a homemade model with a white craw.”

Line was a huge player for Wheeler’s jig fishing.

“I used 20-pound Suffix Advance,” states Wheeler. “I didn’t have time to re-tie- I had to get the jig back into a boat slip and catch them while they were active. Lighter line would’ve broken, but the 20-pound Advance allowed me to get right back in there and land them.”

For buzzbait fishing, Wheeler used 40-pound Seaguar braid. Jacob used his Signature Series Duckett rods and reels for all of his fishing.

Lane’s setup was one fans are seeing a lot in his hands lately.

Lane also used a drop-shot for deeper banks with a ⅜-ounce Flat Out Tungsten Weight and a Powerbait Hit Worm using the same rod and reels.

“I fished topwater, drop-shot, wacky rig, and a swimbait to get to the Championship Round,” Pace said. “My topwater bait was a Jackal Bonnie fished on 30-pound Hi-Seas Grand Slam braid, a Temple Fork Outfitters (TFO) Pacemaker 704 rod and a Savage Gear reel. I also used Mustad TG76 Ultrapoint trebles on it.”

For his drop-shot, Pace used a hand-poured straight worm, and for his wacky rig, he used a W&M green pumpkin Trickster, 15-pound Hi-Seas braid, and an 8-pound Hi-Seas fluorocarbon leader fished on a 6103 Pacemaker TFO rod with Savage Gear spinning reel.

“The areas I fished were just outside spawning pockets on points and in banks that lead out of spawning areas,” Pace said.

All of DeFoe’s scoreable bass were caught using four baits.

A ½-ounce white Terminator Pro Jig with a white Bass Pro Shops Swim-N-Elite Chunk and a ½-ounce white bladed jig with a Zako trailer were fished around docks with a shad spawn.

“I fished the James River arm the whole event until last day,” claimed DeFoe. “I went up to King’s River that day. It was a mistake.”

Birge used two setups to get to the Championship Round.

“I targeted shady banks in the morning and windy banks the rest of the day. Primarily bluff banks,” said Birge.

“I fished a Ned Rig,” said Lee. “I used a green pumpkin Berkley PowerBait MaxScent 4-inch The General. I fished the lower end of the lake and my best day was mainly smallmouth. I was fishing pea gravel banks and points. The smallmouth were bedding. I went down banks in pockets and caught spots and large-heads that were on the banks.”