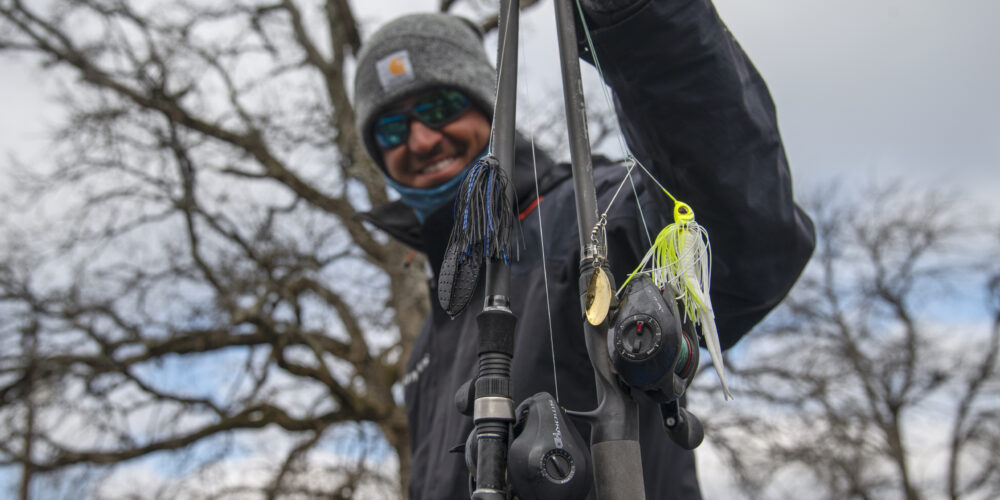 QUITMAN, Texas – The second stop on the 2022 Bass Pro Tour – Toro Stage Two Presented by Grundéns on Lake Fork – was defined by big bass, cold weather, and a nail-biting finish. It was also heavily dominated by forward-facing sonar, which anglers employed both shallow and deep, with a variety of baits. A handful also went “old school” with shallow-water lures like spinnerbaits.

“I focused on the big stump flats and used my LiveScope to find the drains,” he said. “I fished all of the major creeks on the lake and stayed shallow, around 5 feet of water to target true prespawn bass. I’d work my way back in and a lot of the fish were right on the edges of the drains, and I could see them with my LiveScope.”

His primary weapons were a red flat-sided crankbait and a squarebill as well as ¾-ounce white and chartreuse spinnerbait with a Geecrack Gyrostar swimbait as the trailer.

“The crankbait caught more fish, but the spinnerbait was my big-fish tactic,” Jones said. “It had a No. 4 single Colorado blade on it and accounted for most of my biggest fish during the week.”

Ebare, a Bass Pro Tour rookie, made his first career Championship Round with the help of a jerkbait and jig in various sections of the lake.

“I ran the same pattern all across the lake, concentrating on creek channels close to spawning areas,” he said. “I was fishing between 5 and 25 feet of water and fishing the trees that had big root systems.”

He relied on a 5/8-ounce black-and-blue jig with a green pumpkin chunk trailer in deeper water, (fishing it with a 7-foot heavy Hammer rod) and opted for a ½-ounce jig in shallower water. Ebare also mixed in a flat-sided crankbait and jerkbait, with the jerkbait becoming a key player later in the event.

“I could get bit with the jig and (catch) big ones, but it was a slow process, and I had to find a way to catch them quicker,” he said. “I used a white suspending jerkbait on a 6-foot-9 medium heavy Hammer rod and fished it on 12-pound Seaguar Tatsu Fluorocarbon so I could horse the fish in.”

Wheeler is one of the best in the world with his electronics, specifically forward-facing sonar, and that was how he won his group and advanced to the final day. He relied on a variety of different jerkbaits and a glide bait to get fish to bite.

“I caught some on a glide bait, but it was mainly the jerkbait,” he said. “I had six tied on every morning because sometimes you can get fish to react to one or the other. I fished a Rapala Shadow Rap Deep, RipStop Deep, 13 Fishing Loco Special and others depending on the depth zone.”

Wheeler began practice by searching shallow before realizing the deeper bite on the lower third of the lake with forward-facing sonar was the way to go.

“I had a good practice shallow but felt like that deal was dying with the cold weather,” he said. “I switched to deeper water, not in the creeks but on the main lake at the mouth of creeks, everywhere from 5 to 25 feet of water, and it was all different based on how the fish were positioned. Some were on trees, some were relating to the bank or hard bottoms. Some were not relating to anything and just suspending.”

Ashley spent the week shallow on the upper end of Lake Fork: less than 5 feet deep, and often much shallower.

“Early in the week, it was all 2 to 3 feet of water on the stumps in a big spawning flat with a white and chartreuse 1/2 –ounce double Colorado Greenfish High Class Blade Spinnerbait,” he said. “I don’t know if we caught them all or if they stopped coming back there, but that bite died.”

Later in the event, Ashley switched to slightly deeper water between 3 and 4 feet, pitching a black-and-red Zoom Z-Craw, primarily to docks. One dock, in particular, accounted for several fish.

“That dock was special, right at the mouth of a spawning flat with some brush in and it still had water around it,” he said about Lake Fork’s low water levels. “I caught seven fish off of that one dock one day.”

Both of the Joneses had great events, with Junior taking the win and Senior winning his group and advancing straight to the Championship Round for winning his group. The elder Jones was very proud of his son this week but dominant himself early on with the help of his Garmin LiveScope.

Included in his catch was an 11-2 that he caught on a Rapala Ott’s Garage Slim 6 crankbait in red crawdad. He changed out the stock hooks for No. 4 Owner Short-Shank Trebles. That fish was on an isolated tree and he located the fish with his electronics, catching a 6-5, the 11-2, and a 3-9 on three consecutive casts. A single Colorado-bladed spinnerbait was another primary weapon for him this week.

Oklahoma pro Zack Birge spent most of the week with a single lure (a jerkbait) while hunting fish with his Lowrance ActiveTarget forward-facing sonar. He caught a 10-14 on his first day of fishing on Lake Fork and was able to ride the pattern until the final day.

“That’s pretty much all I’ve done all week,” he admitted. “I’m fishing a Hardcore Minnow Flat in ghost pro blue in the 8- to 15-feet range. I was fishing around points, secondary points, isolated timber and places that had timber on points.”

Birge said each day was slightly different in terms of the area he had the best success in, but the middle section of the lake and toward the bottom of it were his primary areas.

“I was fishing the main lake and not up the creeks,” he said. “The further up the creek, the harder it was to get a bite for me in practice.”

VanDam spent his week primarily looking at his Humminbird Mega Live forward-facing sonar with a Strike King KVD Deep Jerkbait in crystal shad and citrus shad. The jerkbait did most of the work for him, but slow-rolling a spinnerbait with a Googan Baits Saucy Swimmer as a trailer accounted for a handful of big bites.

“It was mostly a jerkbait for fish I could see suspended around trees in 10 to 15 feet of water and the fish were sitting 8 to 10-feet below the surface,” VanDam said. “The best areas were close to spawning areas and they were staging just outside of small pockets.”

Lucas had a two-pronged approach at Lake Fork, flipping shallow targets and utilizing a jerkbait for fish he saw on his forward-facing sonar.

“It was 80/20 with most of my fish coming on a Berkley PowerBait Pit Boss in Okeechobee craw, fishing along the creek channels,” he said. “I would also throw a Berkley Stunna 112 in Hankie Pankie (bone white) to fish I saw suspended out there.”

Making his second Championship Round in as many events this season, Sprague used the same lure he used at Stage One, a black-and-blue Strike King Game Hawg. Sprague fished it with both 3/16- and 3/8-ounce Strike King Tour Grade Tungsten weights in the early rounds and also utilized a green pumpkin Strike King Thunder Cricket on the final day.

“I was looking for stumps and isolated stuff and also looking for the stuff underwater that you couldn’t see, using my Lowrance Active Target,” he said. “The 4- to 8-foot range was the best, and I was fishing the north end of the lake, which is uncommon for this time of year. It had a little more stained water and warmed up a little faster.”

Another critical lure for him was the Strike King Chick Magnet flat-sided crankbait in fire craw.

“That was key for me early in the event, focusing on creek channels and drains,” Sprague said.

Making his first top ten on the Bass Pro Tour, Floyd did what he likes to do most, staying shallow for most of the day.

“I was fishing extremely shallow and some of what I would call the mid-depth range,” he said. “It was all 2 to 8 feet of water and mainly slow rolling a spinnerbait.”

“I was taking my time, fishing it around the bigger trees,” Floyd said. “Sometimes it would take multiple casts to the same tree to get one to bite.”