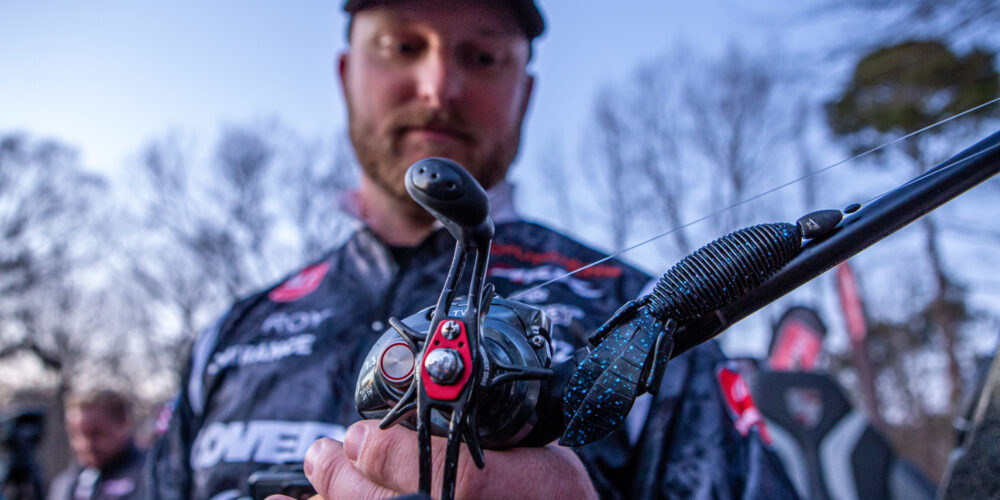 MONROE-WEST MONROE, La. – After four qualifying days on Lake D’Arbonne and a Knockout Round on Caney Creek Reservoir, the playing field changed again at B&W Trailer Hitches Stage One presented by Power-Pole on Lake D’Arbonne. The Championship Round of the first Bass Pro Tour event of 2022 was held on Bussey Brake Lake, a recently rehabilitated lake loaded with shallow cover and full of big bass.

The number of fish that showed up on SCORETRACKER® was lacking for the final 10 anglers, but the final-day field caught some legitimate giants, including two more than 9 pounds and a new Bass Pro Tour record for Randy Howell with his 12-pound, 15-ounce fish.

Bradley Roy was able to secure his first professional win with five bass for 26-2, and he did it pitching shallow bushes, a common theme among almost everyone on the final day.

The Kentucky angler started the morning off with his first fish one hour into Period 1 and then went two hours without a bite. Then, the early afternoon bite picked up steam as he caught a 3-11, 3-9, 8-14, and 5-8 in two hours after noon. Roy failed to catch a bass in the final three hours but still held on to the win. All of his damage was done by flipping shallow wood.

“The shallower stuff seemed to be the best and the four-foot range was the best for me,” Roy said. “I was flipping and pitching a black and blue D-Bomb with a 3/8-ounce Ark Tungsten weight on 22-pound Seaguar Tatsu fluorocarbon.”

Jones, the reigning Heavy Hitters champion, got the season started right for a 2023 Heavy Hitters qualification as he landed a 9-pounder and four more to finish up in second place. Like Roy, Jones flipped and pitched shallow wood and made two critical adjustments to finish strong.

“I caught my first one flipping a green pumpkin with purple metal flake tube and then missed one when it got balled up on the hook,” Jones said. “I made an immediate switch to a Zoom Z-Craw Jr. and never lost another fish.”

Jones began the day with heavier jigs, downsized to a lighter weight for his plastics, and switched his focus to shallower water.

“I went down to a ¼-ounce weight because it is cold and they wanted something more subtle,” he said. “I started the day in 5 to 7 feet of water but adjusted to the 3- to 4-foot range where the cover was thicker. The key was to find the heaviest piece of shade on the surface, like a big branch, because the big ones were suspending right under those. That was the ticket as it warmed up later in the day.”

Jordan Lee also flipped and pitched wood, but he went with a jig instead of plastics.

“The key was to cover a lot of water,” he said. “It seems like my best depth zone was 3 to 3 1/2 feet deep. I didn’t get many bites, just six, and I caught five of those but the size was there.”

His jig of choice was a ½-ounce black and blue model that he paired with a blue sapphire Berkley Power Chunk.

North Carolina’s Bryan Thrift held the lead for a good portion of the morning thanks to some key early bites, including a 9-3 he caught in the first period.

Thrift made it clear he doesn’t like flipping and pitching while on MLF NOW!, but he made it work and the techniques accounted for all of his fish. Thrift targeted the 5- to 6-foot range, both bushes and bush lines near deeper water.

“It was all flipping a 4-inch black-and-blue tube with a 3/16-ounce weight,” he said. “The lighter weight seemed to make a difference in getting bites in the morning, but it slowed down after that.”

Sprague kept it simple all day long, with one bait accounting for all four of his fish.

“I fished a Strike King Game Hawg with a 3/8-ounce Tour Grade Tungsten weight all day long,” he said. “I was targeting bushes and trees; there’s so much of that out there. The 3- to 5-foot range seemed to be the best, but it was pretty simple.”

Howell was able to sack up over 16 pounds with just two fish (it helps that one of those is a new Bass Pro Tour record). That 12-14 bit at 3:51 p.m. and made Howell’s day and also broke his personal best biggest bass, set just one day earlier with a 10-11 from Caney Creek.

“I fished a lot of different baits and finally settled down and threw a 5-inch black and blue Yamamoto Senko with a red ¼-ounce XPS tungsten weight,” he said. “That’s what I caught all of my fish on, all two of them, the classic Senko.”

“It was a shallow 3- to 4-foot flat with a bunch of bushes on it and the fish were staging there and getting ready to spawn,” Howell said. “It was full of big fish, and I could see Alton when he caught his 9-pounder.”

Like many others in the field, Daniels went back to the basics and flipped and pitched to shallow wood.

“I kept it simple and flipped all day long,” he said. “It was the only thing that I thought I could get bit on. I caught two early on around some dead bushes, which kind of threw me off. Later in the day, I realized the willow trees were better and right after Randy caught that big one right next to me, I caught a 6-pounder, but I figured out what kind of bushes to flip a little too late.”

Reigning Angler of the Year Jacob Wheeler got the season off to a strong start with another Top 10 finish but struggled for much of the final day. He connected with two in the final period with a black-and-blue vibrating jig with a green pumpkin trailer.

“I caught both of them on a vibrating jig and it was tough to generate bites most of the day,” Wheeler said. “They started to slide up shallower later in the day and that’s when I caught those two. It was hard to move around too much and once you got in an area, you really had to slow down and fish it all to get any bites.”

Fukae knew that Bussey Brake would be a good flipping and pitching lake as soon as he saw the lake, but he still tried other techniques.

“It was my first time here, and I threw a lot of different baits,” he said. “I should have flipped all day because that was the only bite I got. This lake has lots of trees and there’s so much cover to flip.”

Lintner was unable to secure a scorable bass in the Championship Round but won Group B’s qualifying round. He lapped the field on D’Arbonne in the opening round with the help of a “power-shot,” a beefed-up drop-shot rig fished on a baitcaster with 16-pound Sunline Shooter fluorocarbon.