Top 10 Baits & Patterns: How They Caught ‘Em at Lake Travis 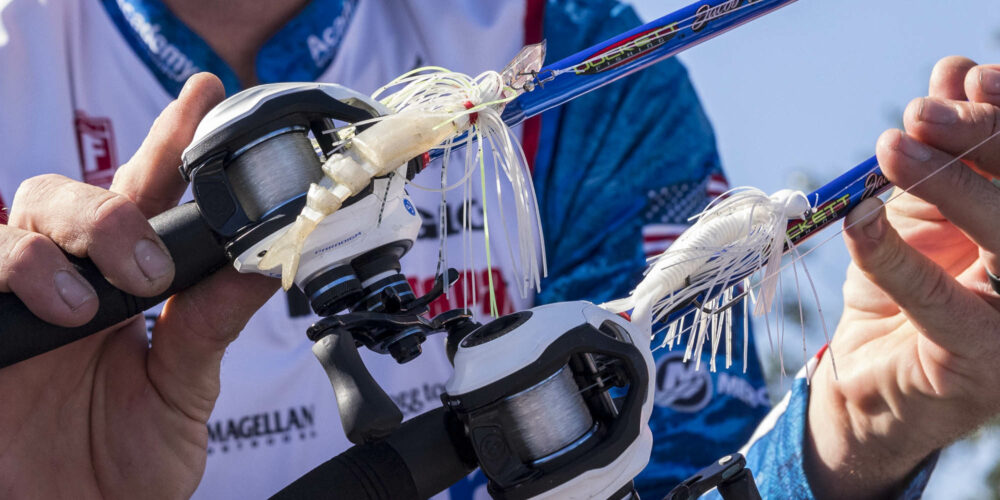 The Top 10 at Lake Travis mixed it up with multiple baits and patterns. Photo by Phoenix Moore. Angler: Jacob Wheeler.
May 7, 2021 • Tyler Brinks • Bass Pro Tour

AUSTIN, Texas – It was an exciting fight to the finish at the Berkley Stage Two Presented by Mercury on Lake Travis. The second stop in the 2021 Bass Pro Tour regular-season schedule was the closest in the tour’s history and featured a mix of several different patterns and baits.

There were plenty of Texas bass caught on moving baits, finesse tactics and sight fishing, and multiple different patterns that developed throughout the course of the six-day tournament.

It was clear throughout the event that Jacob Wheeler was on a better quality fish as he averaged around 3 pounds per fish in the Qualifying and Knockout Rounds. His final day catch lowered his average, but his catch count was enough to give him the win. He targeted the upper end of the lake all week, because he felt it held better fish.

“I had to decide if I was going to stay down the lake where there were more numbers or go up the lake where I felt more quality fish lived,” Wheeler said of his strategy. “There were bigger fish in the dirtier water. I think the water clarity was key more than anything.”

Wheeler targeted deeper docks up the river and caught fish with a swim jig and topwater, but his No. 1 weapon was a shad-colored 1/2-ounce vibrating jig with a white fluke-style trailer.

“I couldn’t catch them on the flatter banks and it had to be near deep water,” he said. “A few of the docks were in pockets, but most were on deeper banks or right on the channel. I figured out that the bigger fish were sitting in the top of the 5 or 10 feet of the water column. I tried wacky rigs and drop-shot rigs down deeper and would only catch little ones.”

Bobby Lane‘s late-day rally nearly got him a win, and he did it on the strength of finesse fishing, namely a wacky-rigged 5-inch Berkley PowerBait The General in green pumpkin.

“During practice, I saw a lot of fish on beds and started the event fishing around docks and the bank,” he said. “I started fishing for them in the tournament and was in 18th place after the first day. During the second day, I ran the same pattern but stopped seeing as many bass shallow.”

His primary pattern developed during the Knockout Round as he switched from the inside to the outside of the marina docks.

“I ran out a little deeper and caught two nice ones right away on deeper docks with the wacky rig,” he said. “The deepest I caught a fish in this week was 137 feet. Of course, I wasn’t catching them that deep; I could see them suspended on my Lowrance ActiveTarget in 10 to 20 feet deep on the dock cables. I’d let the bait sink down about that far because anything deeper and you would break off instantly because of all of the zebra mussels on the cables.”

All week long, Mark Daniels Jr. targeted schooling fish with a jerkbait and Z-Man Slim SwimZ swimbait early each morning before switching to finesse fishing as the day progressed.

The drop-shot was his best weapon as he targeted bluff walls and rocky banks with a morning dawn-colored finesse worm.

“I was fishing steep banks between docks but never caught a fish on the docks themselves,” Daniels added. “I think they were spawning right along those banks on little shelves down deeper because the water was so clear.”

Brent Chapman enjoyed extra days off as he won his group during the Qualifying Rounds and went straight to the Championship Round. He got there by fishing quickly and covering water with a shad-colored vibrating jig.

“I kept that in my hands and covered water,” he said. “I caught them in the backs of creeks in a foot of water and out on bluffs when my boat was sitting in 20 feet of water. The fish were predominately very shallow.”

Chapman also mixed in a shallow wakebait on the surface in the mornings, but the bladed jig was his No. 1 weapon.

“I used 3/8-ounce and 1/2-ounce sizes and went with the bigger size when it was a little deeper,” he added. “I targeted the lower end of the lake around the Jonestown area.”

John Cox qualified for his first Bass Pro Tour Championship Round in just his second event by fishing a Berkley PowerBait The General in various colors and rigged several different ways.

“It was pretty much all The General this week,” Cox said. “Once I ran out of one color, I switched to another one. It didn’t seem to matter. I caught some wacky-rigging it, some fishing it on a drop-shot, and some just hooking it in the nose.”

Cox targeted the middle section of the lake and fished for bedding fish, fry guarders, and fish positioned on docks.

“I started the event with spawners, but as the week went on, that wasn’t happening anymore,” he said. “Later in the event, I realized they were starting to get on the docks better. This is a neat lake and there are fish everywhere. It was all spinning rod fishing this week and it felt like I was smallmouth fishing.”

Zack Birge won Group B’s Qualifying Rounds after catching 33 bass for 67-4 over two days. He did that with the help of a finesse jig and continued with that technique in the Championship Round.

“I ran around and fished steep banks,” he said. “They were steep but not vertical; it had to be more like stair steps with the slate-looking rocks. It wasn’t around boulders or smaller rocks.”

He fished a 1/4- and 5/16-ounce Omega finesse jig in PB&J paired with a 3-inch Googan Baits Krackin’ Craw as the trailer.

“I threw that little jig all week long,” Birge said. “I caught them as shallow as four feet deep and as deep as 25 feet. During practice, I caught them up and down the whole lake, but during the tournament, it was down on this end and within five miles of the ramp.”

Like others in the field, Casey Ashley progressed as the week went on. He targeted spawning fish on mainlake points to begin the event before switching to docks in the later rounds.

“I had a one-mile stretch full of spawners the first week, but that bite started to die in the Knockout Round,” Ashley said. “I caught some during the Championship Round in the morning on a little swimbait around a shad spawn, but most of my fish were on flat docks with a shaky head. I ran around and looked for any docks with a flatter bank which is hard to do on this lake.”

Ashley caught some fish on a jig, but a 3/16-ounce Greenfish Tackle Casey Ashley Clean Up Shaky Head with a Zoom Trick worm was his best bait for both spawning fish and fishing docks.

“I caught some on green pumpkin, some on watermelon candy and watermelon red,” Ashley said of his Trick Worm color selection.

Brent Ehrler chose to fish offshore, both on points and marina docks.

“I was fishing off of the bank but not deep,” he explained. “I caught some fish schooling fish on topwaters and with a Lucky Craft Slender Pointer 127 in ghost minnow and with a swimbait on a ½-ounce BOSS Swimbait head.”

He also targeted docks with a mix of a Yamamoto Slim Senko on a Neko Rig, a 5-inch Senko on a wacky rig, a drop-shot with a Roboworm, and a Ned Rig with Roboworm Ned Worms.

Arkansas pro Stephen Browning had a one-two punch of a ½-ounce Evergreen Z-Man Jackhammer ChatterBait in spot remover paired with a pearl Z-Man Razor ShadZ and Ned rig with a Z-Man Finesse TRD in California Craw.

“I was running bluffs wit the Ned Rig and Jackhammer in the Colorado River,” he said. “On the second day, I went further up the river to get into more stained water. I did most of my damage around docks.”

The exception was one bass that he caught on a Jackall Digle Crankbait. That 6-3 bass earned him $1,000 as the Berkley Big Bass during the Knockout Round.

“I caught that one casting to a windblown point and it was the only scorable bass I caught doing that all week,” said Browning. “That bite got me off track a little.”

As the event progressed, so did Meyer’s pattern and he was forced to adapt to advance each round.

“Every day was a completely different way to catch them for me,” he said. “The first day, I was skipping a swimbait under docks and the next day was with a baby bass and natural shad 5-inch Yamamoto Senko on a wacky rig. During the Knockout Round, I caught them on bluegill patterned Evergreen Z-Man Jackhammer ChatterBait and an Evergreen Flat Force crankbait. During the Championship Round, it was the wacky rig on docks again.”

Meyer targeted the bigger creeks on the lower end of the lake, including the Jonestown area.