Top 10 Baits & Patterns: How They Caught ‘em on the St. Lawrence River 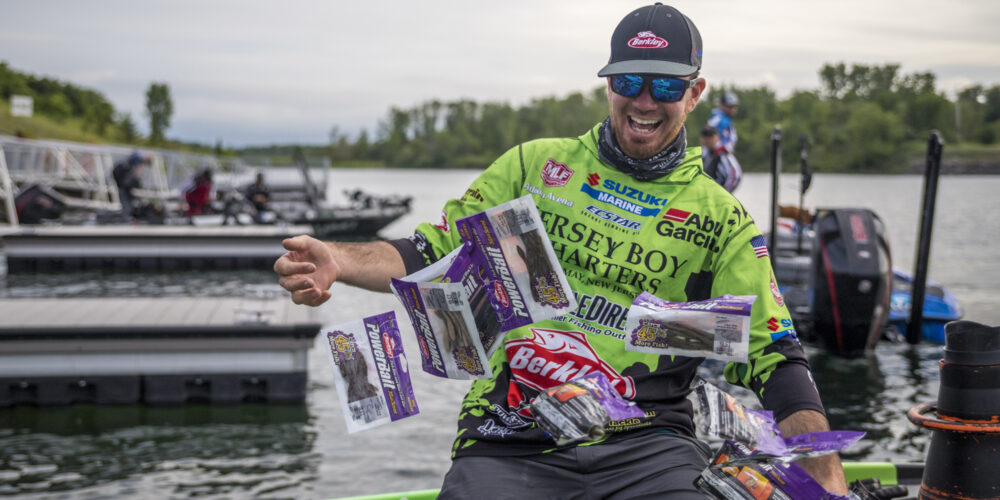 The Top 10 threw their best at the smallmouth of the St. Lawrence River. Photo by Phoenix Moore.
July 2, 2021 • Tyler Brinks • Bass Pro Tour

MASSENA, N.Y. – There wasn’t much in terms of pattern diversity on the St. Lawrence River at General Tire Stage Five Presented by Berkley. The majority of smallmouth in the river are currently shallow, either spawning or just wrapping it up. That led to a host of different ways to catch fish, but most of it was through the lens of a flogger.

Out of the Top 10 anglers, only Skeet Reese and John Cox didn’t have a flogger in the boat, but they still spent some time sight fishing.

Jacob Wheeler found himself on the top of the leaderboard after each of the three days he fished the St. Lawrence. He set the Bass Pro Tour single-day and two-day records in his two qualifying days, and won the automatic bid to the Championship Round with the help of a flogger after catching 222-1.

Wheeler had a goal coming into the tournament to fish close to Massena, but didn’t find the groups of fish he thought he needed to win, so he made an 80-plus-mile run to the Clayton area.

“I started practice near Massena but quickly saw it wasn’t going to work, so put it on the trailer and headed towards Clayton,” he said. “The bigger concentration of fish were there and the fish were a little behind in spawning. The cooler water from the lake seemed to have more fish spawning, and that area always seems to have the biggest concentration of fish, even though it gets more pressure.”

Once Wheeler located groups of spawning fish, efficiency was his biggest key. He beefed up his line selection to get fish in quicker, opting for an 8-pound Sufix Nanobraid with a leader of 12-pound Sufix Advance fluorocarbon.

He had two primary weapons for his baits, a drop-shot with a #4 VMC Finesse Neko hook, ½-ounce VMC tungsten drop-shot weight, and a Googan Baits Rattlin’ Ned in blue penny. He used the same bait on a ¼-ounce Ned-style jighead and mixed in a pink Ned worm for better visibility.

Another rig that accounted for some of his catch was a VMC Tokyo Rig with a white 3.3-inch Googan Baits Bandito Bug. He utilized a ¾-ounce VMC Tungsten Slider weight.

“The Tokyo Rig allowed me to keep the bait right in the bed better,” Wheeler said. “I could also use heavier gear and went up to 15-pound fluorocarbon.”

Texas angler Jeff Sprague equaled his best finish on the Bass Pro Tour with the help of bedding smallmouth and a flogger. He caught 26 bass for 100-6 to finish second to Wheeler.

“We came up a little short of the goal line,” he said of his second-place finish. “I was mainly sight fishing but did use a Strike King Caffeine Shad the first day to help locate fish on beds.”

His primary lure was a Strike King Half Shell in Sexy Shad.

“I used that bright color just to see it better,” Sprague said. “I alternated between a 3/8- and 1/2-ounce drop-shot weight, depending on how deep the beds were and how much current there was.”

Fishing the Championship Round on his birthday, Reese can claim to be tops in the “non-flogger” division of the event. Even though much of his success came from blind casting, he believes many were still spawning.

“I caught some that I saw on beds, but I was probably catching bed fish even though I wasn’t sight fishing,” he said. “I was looking for places with a sand and gravel mix. Sand seems to be a big part of it here when they get up shallow to spawn.”

Reese’s primary location was 75 miles away from takeoff, but he also caught some fish closer to Massena on his second day of fishing. His top-producing lures covered a wide range, with a Lucky Craft Pointer 78 DD in Table Rock Shad and a 4-inch Berkley PowerBait MaxScent The General in green pumpkin being his best.

“I fished The General wacky-rigged on a drop-shot,” he said. “I also used it on a regular wacky-rig when it got slick. A Lucky Craft 1.5 squarebill and vibrating jig also produced some fish.”

Avena was one of the handful of anglers with previous flogger experience. Having grown up in the region, he knew the value of the device and what to expect fishing for spawning smallmouth. The flogger assisted him with approximately 75 percent of the bass he caught while fishing in the Clayton area.

Searching for bedding smallmouth, he had a specific bottom composition in mind, as not all flat areas were not the same.

“It had to be a hard-hitting bank,” he said. “Flats that were adjacent to deeper water where the current was hitting those flats.”

Avena caught some fish casting a black maribou hair jig, but the bulk came by drop-shotting or fishing a Ned rig. He also landed some with a small swimbait fished around bedding bass.

Ehrler used a flogger some, but spent a reasonable amount of time standing and fishing with traditional methods. But, catching spawning smallmouth was still a key to his top finish.

“I didn’t have a flogger on the first day and borrowed one for the rest of the tournament,” he admitted. “I was strictly casting to light spots, and when I did have the flogger, I would locate them with it but would stand to fish for them.”

His main tactic was drop-shotting with either a Yamamoto Shad Shape Worm or Yamamoto Ika in green pumpkin and pearl laminate. His other top bait was a Roboworm straight tail in Aaron’s Magic. Ehrler also landed a handful of bass with a Ned rig.

Fishing between Morristown and Chippewa, he covered a 15-mile stretch each day to the spawning grounds.

“They were either there or you couldn’t get a bite,” Ehrler said of his areas. “When there were beds, there were several beds right next to them.”

Lucas also sight fished using a flogger and was glad he brought it along for the trip.

“I bought one about 10 years ago but never used it,” he said. “It’s such a workout doing that; I feel like it was ‘leg day’ at the gym every day I fished.”

When it was slick calm, Lucas utilized a black 1/8-ounce marabou hair jig and cast to any light spots he saw, but the bulk of his catch came with a drop-shot.

“I was using a Berkley PowerBait MaxScent Flatnose Minnow in blue pearl with black hologram,” Lucas said. “The lighter color made it easier to see when the fish ate it.”

Another in the bed fishing with a flogger contingent was Texas angler Alton Jones Jr.

“One hundred percent of my fish were spawning fish,” he said of his week on the St. Lawrence River. “I was fishing the Morristown area and looking for the right mix of sand and rock. The key for me this week was spending my practice with my trolling motor on high and looking for beds. When you found one, there would be a cluster of them in the same areas.”

Jones caught some with a black marabou hair jig, but the drop-shot accumulated most of his weight. His bait choices were a four-inch Geecrack Revival Shad in chartreuse and a green pumpkin Geecrack Bellows Stick in the 3.8-inch size.

While much of Spohrer’s time on MLF NOW! showed him with a flogger fishing for spawners, his week didn’t start that way.

“I’d estimate that 75 percent of my fish the first two days were all casting with a 1/8-ounce black marabou hair jig,” he said. “I was covering ground and trying to catch John Cox, but when he got too far ahead, I went practicing. That’s when I found an area with tons of beds.”

Spohrer exploited that area in the Knockout Round with three different baits: a Ned rig and two drop-shot setups.

“For the aggressive fish, I had one Missile Baits Bomb Shot on a rod with straight 15-pound Seaguar Smackdown braid so I could horse the fish in much easier,” he said. “I had another one rigged up with braid to fluorocarbon for the fish that were harder to catch. My third rod was with a 3/8-ounce Ned rig with a goby imitation plastic.”

Bradley Roy decided to purchase a flogger a week before he traveled to New York, and used it for the first time during tournament week. Roy’s key areas were a 60-mile run from the takeoff and he targeted bedding smallmouth in 8- to 14-feet-deep water.

“I caught a few with a small swimbait, but it mostly bed fishing,” he said.  “That was my first time using a flogger, and that was how I caught almost all of my fish.”

His baits of choice were a small minnow-shaped plastic and the Berkley PowerBait MaxScent Flat Worm in green pumpkin and brown back when needing better visibility.

Doing something a little different, Florida angler John Cox stayed close to the ramp and fished near the takeoff site around Massena Intake Dam. He caught some fish sight fishing but didn’t fish with a flogger.

He fished several vast flats, but his key areas had a mixture of sand, grass, and rock.

“There was also these light-colored shell beds, and those were money,” Cox said. “Each time I found that I would catch three or four.”

After winning his group with 175 pounds in his two qualifying days, Cox went straight to the Championship Round on the strength of a black Berkley PowerBait MaxScent Hit Worm rigged on a 3/16-ounce ball head jighead. He fished it with a straight retrieve; though he discovered it by accident, it looked similar to a marabou jig coming through the water.

Cox recalled trying it simply because he didn’t want to use up his other MaxScent worms.

“That turned into a great search bait,” he said. “I used that and cast a wacky-rigged Berkley PowerBait MaxScent The General in whatever color I could find; it didn’t seem to matter. I used the 5-inch bait when it was windy the first day and then used the 4-inch bait the rest of the time.”