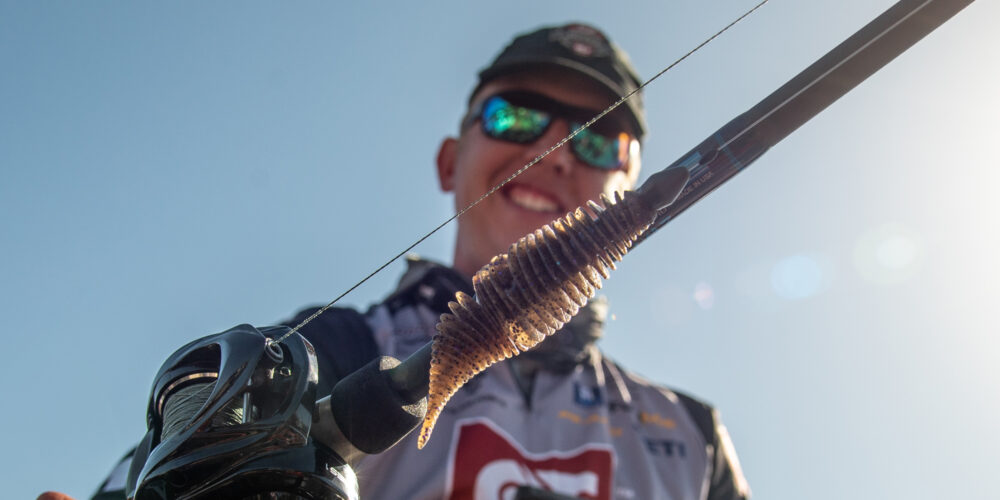 TYLER, Texas – It was typical East Texas springtime fishing throughout General Tire Heavy Hitters Presented by Bass Pro Shops. Shallow-water fishing dominated on Lake Palestine, and the top anglers used a small handful of baits for bass in all phases of the spawn, with plenty of bedding bass in the mix.

Here’s how the Top 10 anglers caught them on Lake Palestine.

DeFoe began the event chasing the shad spawn before switching solely to spawning largemouth. It was enough to win his group’s qualifying round and earn two days off and a spot in the Championship Round.

“The first two days, I caught two bass fishing the shad spawn with a ½-ounce white swim jig with a Bass Pro Shops Speed Shad in hologram shad,” DeFoe said. “I transitioned to the bass spawn with a Tokyo rig with a 3/8-ounce weight and 4-inch swimbait and a Texas rig with a 3/16-ounce weight with a Bass Pro Shops Magnum Fin-Eke Worm in Sooner run on a VMC Hybrid Wide Gap hook that they’ll release at ICAST.”

DeFoe primarily fished the middle of the lake and stayed in one creek for most of the event but switched gears and moved further south on the final day. He relocated to an area he found in practice and didn’t touch until midday during the Championship Round.

“They were spawning very shallow, and I didn’t catch one deeper than 2 feet,” he said. “Some were on hay grass, some were on gator grass, and I caught a few on the backside of docks. Even with them being so shallow, you couldn’t see them. You’d see the ring of the bed, but the bass seemed to disappear in the middle of the bed.”

Lucas stuck with one lure for nearly every fish he landed on Lake Palestine while fishing Kickapoo Creek, a ½-ounce white swim jig with a matching Berkley Chigger Bug as a trailer.

“I kept it super simple,” he said. “I was mainly looking for staging fish that were pre or postspawn. The isolated trees that were further away from other trees were best if they were very shallow, less than 1 foot deep.”

Monroe flipped and threw a frog around bushes and trees all week long, doing what he does best and what he’s most known for. While he didn’t see the fish bedding, Monroe assumed they were.

“It was very shallow in some places, less than a foot, and you’d see the mud streak when you hooked one,” he said. “I think they were bedding on those stumps, but you couldn’t see them.”

His frog of choice was a River2Sea Ish Monroe Phat Mat Daddy Frog in snipe and yellow head. For flipping, he chose a black/red flake Missile Baits D-Bomb.

Staying shallow and stealthy as possible were keys to Shryock’s week on Lake Palestine as he fished a large spawning flat on the northern end of the lake. He utilized various creature baits and mixed in green pumpkin and black-and-blue baits.

“Being accurate with your casts and staying quiet was the biggest thing this week,” he said. “The fish were very shallow and it seemed like you couldn’t get shallow enough; when they ate your bait, it was like a fish hitting a frog on the surface. I tried not to make any noise, kept the wind to my back, and fished very slowly to stay as quiet as possible.”

Commitment to bedding bass was the M.O. for Jones all week long, including spending nearly half of the Championship Round on a large bedding bass he failed to catch. It didn’t matter as he still took home $100,000 for his 6-4, a day after earning the big bass check in the Knockout Round with an 8-3.

“I committed to one thing all week: sight fishing on the south end of the lake,” Jones said. “The northern end is where most of them live on Palestine, but I did a big lap of the lake in practice and noticed it was much cooler water down south. I thought that those fish were in the earlier stages of the spawn and were further along up the lake, so I’d have more fish moving into my areas down there.”

His bait of choice all week was a Geecrack Bellows Shad in a green pumpkin with purple flake color that will soon be available, called “A.J.’s Juice”. He rigged it on a 5/0 flipping hook and added a 3/8-ounce tungsten weight to round out the setup.

“Early in the morning, a white 3/8-ounce swim jig was the deal around the shad spawn,” he said. “Once the sun came up, a bream or black and blue colored jig with a Googan Baits Crackin’ Craw was the best.”

Connell chose this lake section because it had more spawning activity and his preferred cover.

“I stayed north because it has some grass, and I wasn’t seeing many bedding fish down the lake,” Connell shared. “I also targeted bushes and the farthest out seemed to be the best. Most of the fish were about halfway back in the creeks. I believe more and more fish were coming up into those areas getting ready to head back to spawn.”

Arkansas pro Stephen Browning breezed through the qualifying rounds and won his group with the help of a Z-Man Evergreen ChatterBait Jack Hammer in Brett’s bluegill color with either a Z-Man Razor ShadZ or DieZel MinnowZ as the trailer.

“Without a doubt, it was the Jack Hammer this week,” he said. “I did catch some on a lizard when it was calmer. I switched between the trailers on the Jack Hammer based on how I wanted the bait to run: the DieZel MinnowZ would make it rise more and the Razor ShadZ was better for keeping it down and digging along the bottom.”

Browning spent his days in the lake’s midsection in ultra-shallow water.

“The key was to get back as far as I could into places they were spawning,” he said. “It was all less than 2-feet deep and it had to have some cleaner water; if you had those two ingredients, it’s where it was going down.”

Oklahoma pro Zack Birge kept it simple: nearly all of his bass came by fishing a white or black popping frog.

“I caught one here or there on other baits, but it was mainly just the frog,” Birge said. “It was the most consistent bite for me all week and as the event went on, I lost confidence in anything else.”

Birge decided to look for overlooked areas and not focus on the popular creeks that gathered more fishermen.

“The best places were small, short pockets off the main lake,” he said. “Everyone seemed to be gathered in the creeks and going around and around with each other. I’d get a bite or two each little pocket, and most were around reed clumps on the banks that were around two feet deep. They had to be spawning in those places, but I didn’t see many; it was too hard to see them.”

“I think they were on beds, but I couldn’t see them all,” he said. “I saw some cruising and some looked like they were trying to make beds. It was all fishing shallow stuff at the north end of the lake.”

Among his top producers were a chartreuse with black back Lucky Craft 2.5 squarebill, a white and chartreuse Z-Man Evergreen ChatterBait Jack Hammer, and a green pumpkin/black and blue laminate Reaction Innovations Sweet Beaver.

Lane easily won the title of “most lures used” among the Top 10, with frogs, swim jigs, ChatterBaits, spinnerbaits, and flipping baits playing a role in his success this week.

“It was basic shallow, springtime fishing and each day was a little different,” Lane said. “The first two days, it was all moving baits, and I caught some on a spinnerbait, swimming a jig and a bunch on a ChatterBait. It was better flipping a black with red flake Big Bite Baits Fighting Frog when the sun was out.”

A Spro Poppin’ Frog in a natural green color also played a significant role in his success at Heavy Hitters. Lane targeted bushes, bank grass, and cypress trees in less than a foot of water at the lake’s upper end.

“I was about as far up the river as you can go,” Lane said.