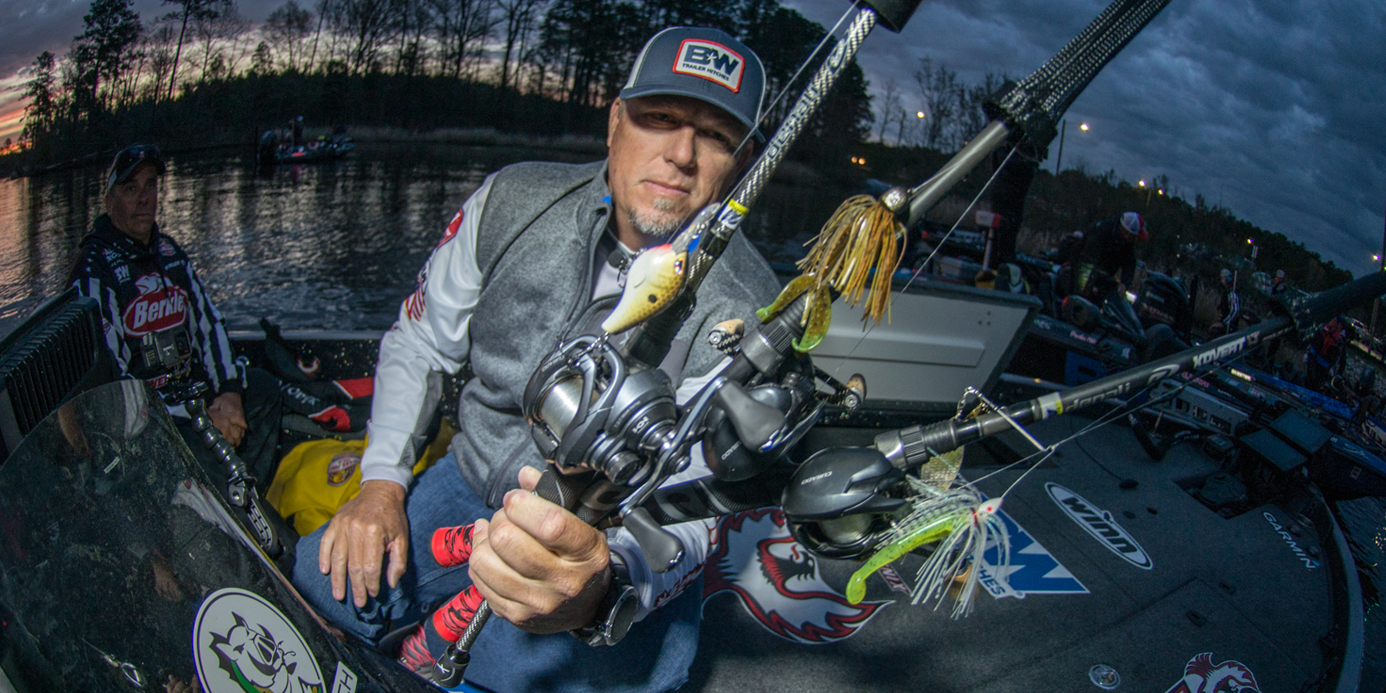 The Championship 10 at the Bass Pro Tour Raleigh Stage Three share the baits that got them to the final round. Photo by Garrick Dixon

Think “classic springtime bass fishing techniques” and you’d be spot-on when it comes to what the Top 10 pros threw to make it to the Championship Round during Stage Three of the Major League Fishing Bass Pro Tour held in Raleigh, North Carolina.

Flipping and pitching, bladed jigs, soft plastics, spinnerbaits and crankbaits ruled the day. And at least one frog came out to play, too.

As detailed in our piece on wacky-worm fishing in the spring, Powroznik relied on a 5-inch green pumpkin V&M Baits Chopstick, which he dipped the tails in chartreuse dye. He wacky-rigged it with an O-ring on a Mustad No. 1 hook, flipping and casting it into small indentations in the grasslines at the mouths of pockets on Shearon Harris Reservoir.

Powroznik flipped a V&M J-Bug around Falls and Jordan lakes in the first three rounds, and also caught one of his two 8-pounders during the Knockout Round on a Livingston Shredder.

On Jordan Lake, Wheeler whacked them using a prototype Googan Baits vibrating jig in black and blue with a green pumpkin Lake Fork Magic Shad trailer. The water was up around 3 feet and the key was to fish the vibrating jig around hardwoods inside pockets.

The focus on Falls Lake was a pond where bass pulling up to spawn. The same vibrating jig caught plenty as did a Googan Baits Bandito Bug with a 3/16-ounce weight around isolated clumps of water, with willows in water from 6-inches to 1-foot deep. Instead of the shad body, Wheeler went with a Bandito Bug on his vibrating jig to add some buoyancy and slow it down.

Wheeler fished Shearon Harris during a warming trend, so he rigged six topwater rods and finally dialed in during the second period with a black popping frog fished on 50-pound Suffix 832 braid. The key for finding bass was not to fish the obvious spawning areas, but to fish the small turns on the main creek. These spots were overlooked by many locals and fish were not pressured.

Tak used “nothing special,” (his words, not ours!) flipping a Sweet Beaver on ⅜-to ½-ounce black-and-blue colored jigs. He mixed in a T/O spinnerbait in white and chartreuse with double Colorado blades, a vibrating jig and a Lucky Craft 1.5 crankbait fished along a variety of cover like buck brush, willows, rip rap and points with rock (all fished on Daiwa rods and reels).

Evers’ go-to was a 4-inch black black/blue Berkley Pit Boss rigged on a 4/0 Berkley flipping hook. Evers slid a ⅜-ounce weight and 25-pound Bass Pro Shops XP fluorocarbon line. A few of his fish were also caught using a ½-ounce jig with a Meaty Chunk, all black and blue.

DeFoe had three different approaches the three different lakes in Raleigh. During the first round, he flipped a Terminator Pro ½-ounce Bama Craw colored jig at rock and wood in . During the Knockout Round, he fished main river points with a suspending and a Bass Pro Shops Shadee Shad soft rigged on a 3/0 VMC Heavy Duty worm hook did the trick. For the Championship Round, DeFoe fished staging areas like bridges, points and creek channels with a Rapala DT 6 crankbait in Red Craw, a suspending and a swimbait.

Sprague kept it simple for pitching and flipping, using a black-and-blue Gene Larew Hammer Craw, Texas-rigged with a ½-ounce Flat Out Tungsten weight. The other option he used with success was a 3/8-ounce white Strike King Thunder Cricket.

Jones said that “precise presentation” was the key to success for him. He skipped a YUM Bad Mamma in green pumpkin with a ⅛-ounce weight into the heart of buck brush.

Lintner caught fish using a power-shot rig and a 6-inch Fat Martens Madness Roboworm tied to 14-pound Sunline Shooter, which was pitched in and around lay downs in pockets of the main river in 2 to 10 feet of water. He also threw a Jackall crankbait in custom shad or red craw, mostly on broken rock points and banks in 4 to 8 feet of water.

On Falls Lake, he had two patterns. In the morning, he’d catch bass on secondary points with Fat Papa 55 deep runner, McStick 110 jerkbait and as his point cleanup lure, a Big Bite Coontail worm on a Buckeye Lures Spot Remover jig. For the afternoon bite, Lane threw a ¾-ounce Buckeye Lures spinnerbait with a 3.5-inch Cane Thumper as a trailer fished along the ends of laydowns along banks.

On Shearon Harris, the Fighting Frog was his primary weapon flipped along reeds in one creek protected from the north wind.