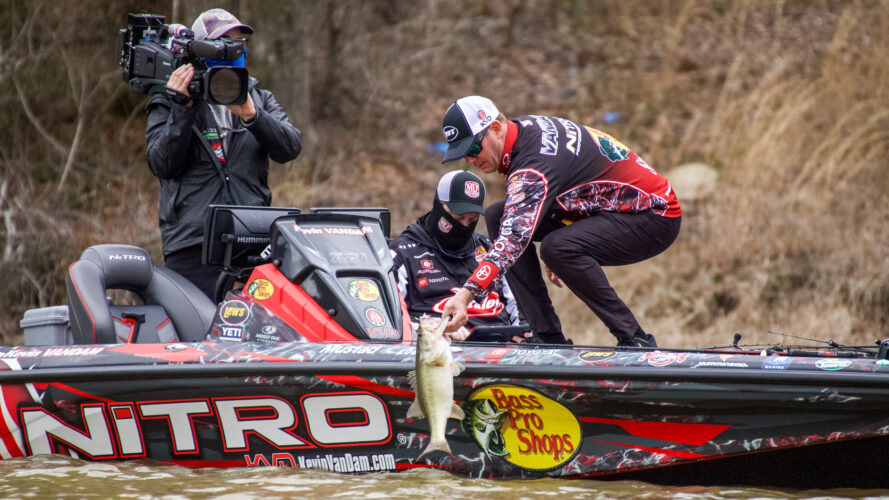 UNION SPRING, N.Y. – Thanks to zebra mussels and gobies, Cayuga Lake now has an abundance of big bass, according to a certain legend of the bassin’ game who hails from Kalamazoo, Michigan. In August, anglers will hit the road for Cayuga Lake for Stage Six of the Bass Pro Tour.

“Cayuga is a really unique lake,” Kevin VanDam said. “It has a northern shallow end with a lot of grass and a big population of largemouth. During the summer, you can head back to the main lake and fish deeper rocky areas, and there is still grass. Zebra mussels cleared it up a lot, and now it has gobies, and a lot of 5-plus-pounders in the lake. Didn’t have fish that big previously. You can add 2 pounds to the average weight of a big fish from 10 years ago.

The last time I fished there, I won an event. There were a ridiculous number of 5-pounders caught.”

VanDam’s won plenty of events and awards over the years, including eight Angler of the Year Awards (seven Bassmaster Elite Series AOYs, one FLW AOY), four Bassmaster Classics, 122 career Top 10s and 29 wins. Those numbers translate into the biggest number of all: more than $7 million in career winnings, the most of all time. VanDam won the 2021 Bass Pro Tour Stage Four on Lake Chickamauga in Dayton, Tennessee.

Cayuga Lake has nearly 43,000 surface acres with approximately 106 miles of shoreline with a maximum depth of 485 feet. According to the New York State Department of Environmental Conservation, the shallow and weedy northern end of the lake covers about 5,800 acres, and the remainder of the lake is deeper with populations of various trout and Atlantic salmon. Hydrilla is also present on the lake.

The lake is located in three counties – Tompkins, Cayuga and Seneca counties. There are access points and launch ramps available in each county.

VanDam believes anglers can score a win with either largemouth or smallmouth bass.

“With the shallow grass fishing in the north end, a lot of anglers would focus on largemouth bass,” VanDam said. “The other big player besides the grass are shallow boat docks for largemouth. Fishing deep rockpiles for smallmouth can be productive. Find the right one, and they concentrate there. They’re big, plentiful, and aggressive.

“The tournament could be won deep or dirt shallow. Whether Ish Monroe wants to throw a frog shallow, or Justin Lucas or Josh Bertrand fish their offshore strengths, they can all fish how they’d like to fish. It will definitely be a special week.”