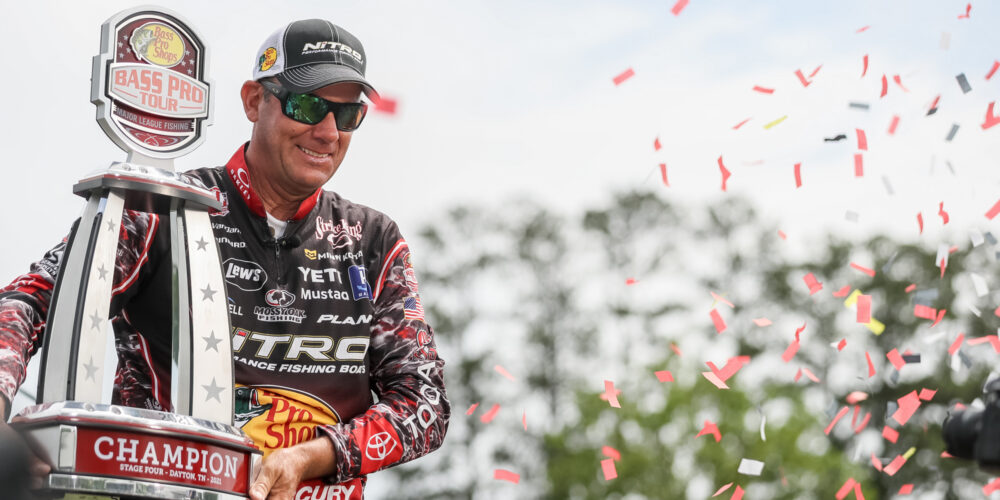 DAYTON, Tenn. – With the illustrious career that Kevin VanDam owns, there aren’t very many “firsts” for him anymore. But one first that has escaped him for the last two-and-a-half years is a Bass Pro Tour victory. Put together Lake Chickamauga, ledge fishing, and a crankbait—that’s a perfect formula for getting the greatest professional angler of all time his first Bass Pro Tour win in convincing fashion.

The Michigan pro was able to hold off Jacob Wheeler and Jason Lambert in the final period, finishing with 25 bass for 70 pounds, 1 ounce. While Wheeler and Lambert were able to make it interesting in the end, there’s no doubting that this tournament belonged to KVD.

Heading into the final period on Lake Chickamauga, KVD was in fourth place on SCORETRACKER® with 30-15 and 5-7 behind hometown hero, Michael Neal. The lead had traded hands all day long on Chick, with either Neal, Wheeler, Lambert or VanDam holding the lead at some point in the first two periods. About 30 minutes into the final frame, the G.O.A.T. made his move to the top.

“I knew that the afternoons were when I really needed to capitalize this week,” VanDam said. “With the TVA drawing the water out at the dam in the afternoon, I knew that if I could get that school fired up with the current I would have a special day. I found that school in practice and knew it had the potential to get me a win, I’m just glad I was able to catch enough of them.”

After he built that impressive lead, VanDam still had nearly an hour-and-a-half to go before his victory would become official. As VanDam’s school began to slow down, Wheeler and Lambert’s schools began to fire up. Both anglers began to close the gap with VanDam over the final stretch, narrowing his lead to just 10-10.

Lambert was unable to boat a scorable bass in the final 20 minutes, and Wheeler brought in a 5-13 in the final seconds to jump Lambert for second place. Even though VanDam was confident in his performance over the final period, he definitely began to feel the pressure Wheeler and Lambert were providing.

“I knew today was going to be tough and I’m excited to watch this tournament back just to see how the other guys were catching them,” VanDam said. “I like to think I’m a pretty good ledge fisherman, so to have these other guys going blow-for-blow with me had to be fun to watch. Credit to Wheeler and Lambert, those guys definitely brought it today.”

The win is VanDam’s 29th of his career and pushes his career earnings just below the $7 million mark. He’s no stranger to hoisting trophies, but after almost three years without a win, VanDam says he’s learned a valuable lesson with this new addition to his trophy case.

“You really start to appreciate every single win you’ve had more as time goes on,” VanDam expressed. “You never know when your next one is coming and you never know when it’s going to be your last one. I’ve had a lot of fun in my career and sacrificed a lot to get where I am. This one means a lot.”