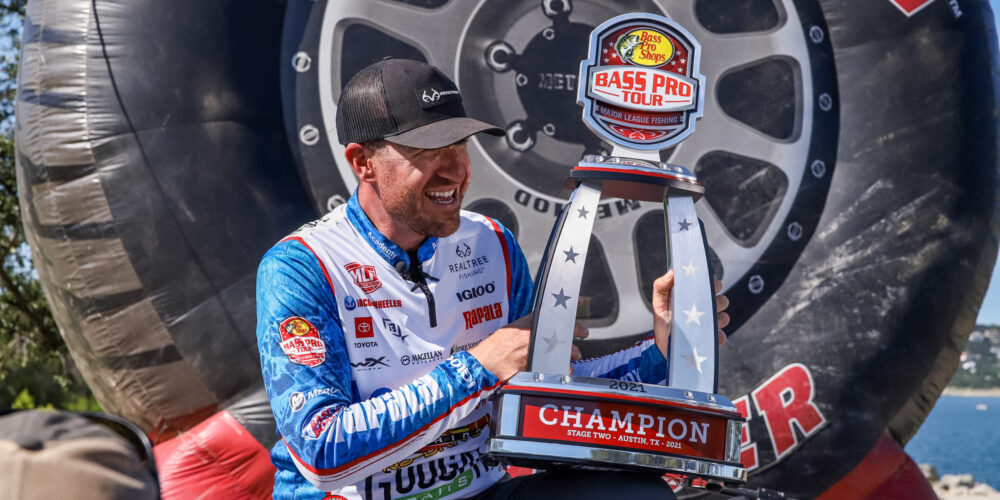 AUSTIN, Texas – It was a record-breaking Championship Round in more ways than one, but one thing remained the same—another Jacob Wheeler Bass Pro Tour championship. Wheeler was able to hold off a surging Bobby Lane in the final period on Lake Travis by only 2 ounces—the closest finish in Bass Pro Tour history—to win the Berkley Stage Two Presented by Mercury, his third stage championship since the league was created in 2019.

Wheeler is now the only angler in MLF history to win three Bass Pro Tour events after catching 13 bass for 28 pounds, 13 ounces. His win on Lake Travis was also his sixth MLF victory including Cup competition. While it wasn’t his largest margin of victory, that doesn’t make this win any less sweet. The Googan Baits pro says that he had to work for every fish he caught this week, especially on Wednesday.

“My heart is still pounding because it was a battle all day long,” Wheeler said shortly after his win. “I knew I was going to have to get some bites in the morning if I wanted to win, and luckily I did that. It was the afternoon that made it interesting and I was really fortunate to catch enough early to hold on and get the win.”

Wheeler was the only angler in the Championship Round field to head up the Colorado River while the remaining nine anglers took their chances with the main parts of Lake Travis. The Duckett Rods pro spent the majority of his time rotating between a swim jig, vibrating jig and a topwater bait. Wheeler knew if he could utilize those baits around the right targets up the river—mainly boat docks—then he would find the success he needed to win.

“I felt like I could catch better quality fish here up the river than on the main lake,” Wheeler admitted. “I knew that some guys might be able to catch more numbers of fish than me all week, but I thought I could make my fish count for more. I think I caught more numbers today because I caught all the big fish up here, so that allowed the smaller ones to move up. That’s why I had the better numbers today.”

Bobby Lane will leave Lake Travis as the leader in the Angler of the Year race, but that’s not a silver lining he’s really looking for following the closest loss in Bass Pro Tour history. Lane made a third-period run that was sure to have Wheeler sweating a bit, closing a near 7-pound gap to fall just 2 ounces short.

Lane trailed Wheeler by 2-2 with four minutes remaining when he connected with a 2-pound largemouth along the outside of a marina. Lane stayed confident and felt as though he was bound to catch one more scorable bass before time expired. Unfortunately for Lane, he was unable to find another bite and collected his second runner-up finish in his Bass Pro Tour career.

“I fished hard today, stuck with it, kept a positive attitude but came up just short,” Lane said following his second-place finish. “I love Lake Travis and I love the way I was catching them today. Congratulations to Jacob Wheeler, he out-fished me today and he earned it. I’m a little bent out of shape, but I’m happy with my start to the year. Just time to get ready for the next one.”

Notes and Top Marks from the Championship Round

The Bass Pro Tour 2021 season continues on May 21 for the Favorite Fishing Stage Three Presented by Bass Cat Boats from Leesburg, Florida and the Harris Chain of Lakes.