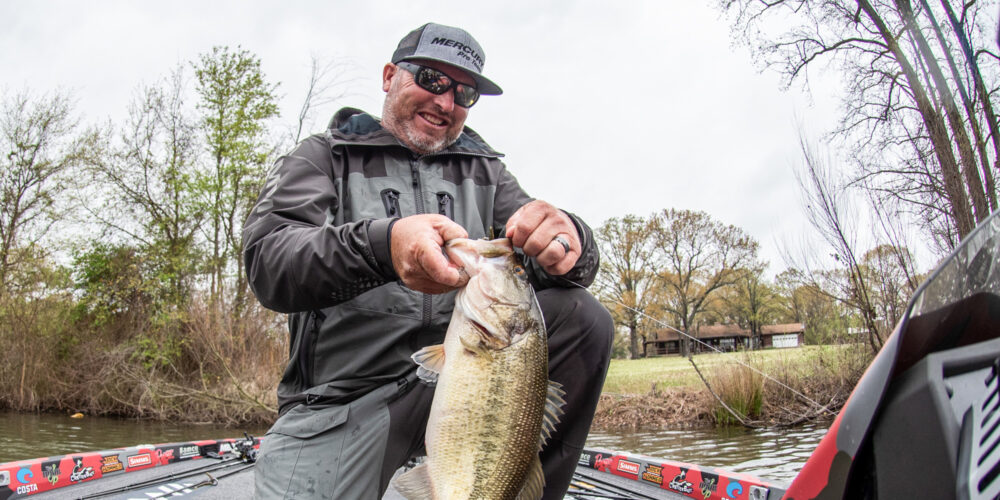 Brett Hite explains why lightening up your line and bait may get you big bites this spring. Photo by Garrick Dixon
March 25, 2020 • Mason Prince • Bass Pro Tour

As we saw in East Texas last week for Stage Three of the Bass Pro Tour, it’s that magical time of prespawn and spawning bass. Like most anglers, Arizona pro Brett Hite loves this part of the year to go on the hunt for big largemouth on beds.

There are obviously many different kinds of baits you can use to catch bass in the spring, but Hite’s go-to is a tried and true bait that he says never lets him down: a Yamamoto Senko.

While Hite doesn’t dispute that this is a great time of the year to catch massive bass, it’s not always easy.

“In the spring, the fish are really shallow and really finicky,” Hite said. “They’re hugging some kind of structure or cover around the bank, whether it’s a boat dock, brush pile or grass. They don’t respond well to reaction baits, they want something a little more finesse. They could be guarding their bed or guarding fry, so they won’t want to go chase something. A Senko is much more subtle and easier to catch them on.”

Downsizing at the Right Time

During Stage Three on Lake Fork, many pros turned a Senko or another type of stick bait on a spinning rod. MLF NOW! analysts Marty Stone and JT Kenney were surprised at the amount of spinning rods they saw the anglers using.

Hite, however, knows exactly why so many spinning rods were visible throughout the week.

“Really it’s about downsizing line,” Hite said. “That lighter line you put on a spinning rod allows you to cast a long way, which helps when sight-fishing for those bed fish. You can get a good distance away from the bed and make a good cast.”

Hite uses a 7-foot-1 medium-heavy Evergreen Combat Stick paired with a Daiwa Tatula LT 3000 reel when fishing a Senko. He prefers a stiffer rod because it makes it easier to work around cover. His Tatula reel is ideal because it has a wide spool, allowing him to make longer casts to beds. Hite also likes the drag in the reel that allows him to horse fish out of cover.

Getting Wacky in the Spring

There are a few ways that Hite likes to rig a Senko, but to him nothing beats one particular set up.

“I prefer to wacky-rig a Senko,” Hite explained. “I like to use a weedless wacky hook with an O-ring on the Senko. It’s super easy to cast off your worm without an O-ring, and everyone knows baits aren’t cheap. Now, if there’s a lot of vegetation, I like using an 1/8-ounce Ark Fishing No Chip Tungsten Worm Weight pegged on the front of it for a Texas rig. Sometimes, even weightless is good too.”

Hite spools his Tatula LT 3000 with 16-pound Sunline Braid and a 10- or 12-pound fluorocarbon leader. That gives him the lighter line he needs to make longer casts and a lighter presentation, while also allowing him to not worry about his line snapping.

Keep an Eye Where You’re Casting

While the bait is important, Hite says it’s equally critical to make an accurate cast with that bait. Location is key, and one missed cast can be the difference between a new personal best and going home empty-handed.

“Your first cast, you want to try to get it to the edge of whatever structure or cover you’re fishing,’ Hite said. “It’s always going to be better to get them to bite near the edge of the cover so they don’t get you wrapped up. Try to avoid pitching the bait right in the middle of that cover to avoid that.”