Why You Should Fish a Frog 🐸 During the Spawn 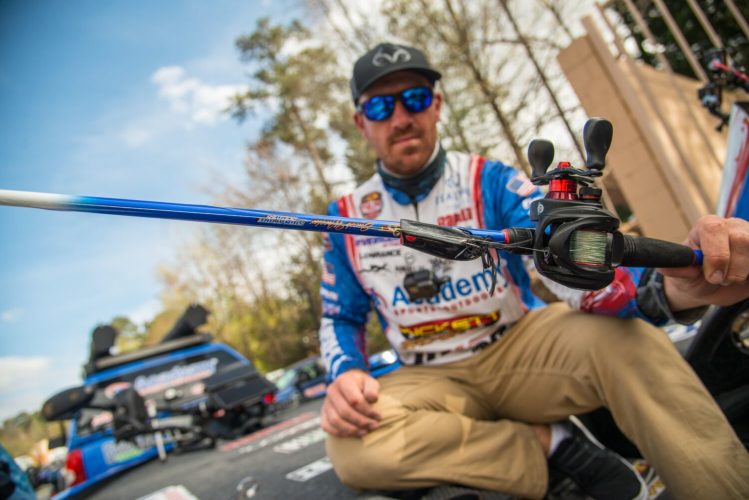 RALEIGH, N.C. – Ask MLF pro Jacob Wheeler what his favorite type of bait is, and he gives you a simple answer: topwater.

“I use topwater baits a lot,” Wheeler said. “Whether that’s a frog, buzzbait, walking bait, or a propbait, I’m going to have those in my arsenal, day in and day out. That’s what I do.”

Conditions Were Tip-top for Topwater

Heading into the Championship Round of the Favorite Fishing Stage Three Presented by Evinrude, Wheeler noticed the conditions over the previous couple of days were aligning for a topwater kind of day.

“We had a big warming trend that gave us two really warm days and a warm night,” Wheeler explained. “When I saw the conditions looked right, I tied on five topwater baits to start the day. I got a couple of bites on a chatterbait to start in the first period. Then I figured out, ‘Okay, they are biting topwater.’ So then, I took out my frog and caught that 4-pounder. That’s when I said to myself, ‘Okay, I know what I’m going to do today.”

Flipping to a Frog

The switch to a black popping frog came in the second period after the Tennessee pro had only caught two bass for 5 pounds, 1 ounce. Once the frog came out, it was a whole new ballgame for Wheeler: A surge of 14-9 in only 40 minutes vaulted Wheeler up SCORETRACKER before he eventually took the lead.

The decision to change to use topwater, specifically a frog, was an easy one for him.

“A frog is a good bait to use when the fish are spawning because it looks like a bluegill around their bed,” Wheeler detailed. “If they’re spawning, those bass are going to want to protect their beds and their area. So, they go attack that bait because they think it’s a bluegill. Sometimes, the only way you can catch them, is on a topwater.”

Flipping a 7-foot-6 Duckett Fishing Jacob Wheeler Signature Series heavy-action rod and an 8:1 Duckett Fishing 420 Series reel spooled with 50-pound Sufix 832, Wheeler was able to boat 13 bass for 54-9 (the biggest an 8-5 that was the largest of the day) over the final two periods. With the fish ready to spawn, Wheeler says it was really a no-brainer to use his frog, especially on a lake like Shearon Harris.

“When the fish are spawning, they’re in water that’s usually around 3 feet deep or less,” Wheeler stated. “That’s especially true on a lake like Shearon Harris, where the water is a little bit stained – that causes those fish to be in shallow water, which just helped the frog be that much more effective.”

Every angler knows it’s not just about the bait, but how you use it that can make the most difference. For Wheeler, it was all about managing his retrieval speed when flipping his frog.

“My retrieve speed was all dependent on the area I was in,” Wheeler divulged. “If I made a cast on a not-so-good looking patch of reeds, I would work it pretty fast. If I felt like there was (a bass) there, I would twitch the bait a few times, then stop it, then twitch it again. You have to go slower when you think there is one around. If it stops over his bed or he just came off the spawn, they don’t like that at all.”

While other anglers were looking for areas on Shearon Harris that looked ripe for a big group of spawning bass, Wheeler strayed more towards the isolated areas.

“The places I targeted were a little less obvious,” Wheeler said. “I looked for the little turns on the steeper banks that had deep water and a little patch of reeds where a couple of bass might spawn. I didn’t look for the big and obvious spawning pockets. I got the majority of my bites on areas where those fish weren’t getting a lot of pressure.”

Topwater is a Longtime Love

This topwater affinity isn’t something that developed overnight for Wheeler. He says he’s had an obsession with these specific baits since he was 10 years old.

“I remember people used to say, ‘I don’t want to take that kid fishing with me, all he wants to do is throw a dang topwater,’” Wheeler reminisced.

Wheeler led for a majority of the day on Shearon Harris but couldn’t hold off Jacob Powroznik for the Stage Three title. A second-place finish will sting for a little bit to be sure, but knowing that his affinity for topwater baits took him to the cusp of a victory is almost as sweet.

“It’s a high-risk, high-reward kind of program,” Wheeler said. “I know that when I use a frog, I’m going to catch above-average fish and today just proved that.”

Wheeler and the rest of the Bass Pro Tour anglers return to action on April 9-14 for the Econo Lodge Stage Four Presented by Winn Grips on Lake Chickamauga in Dayton, Tennessee.