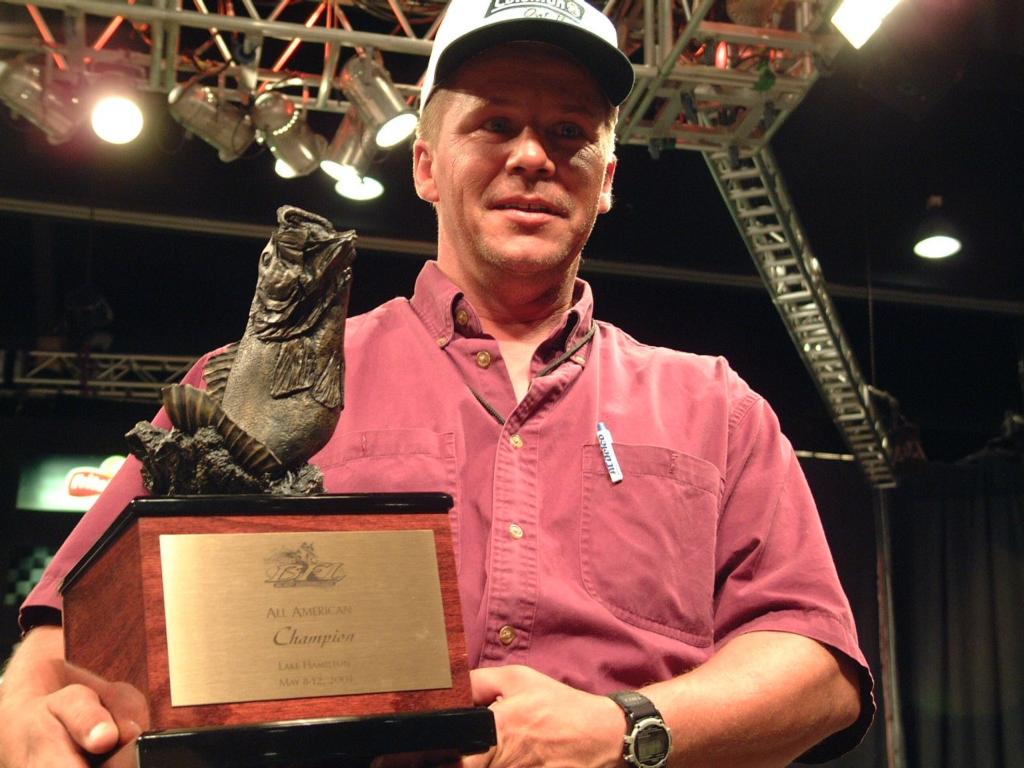 Randy Kelly of Inola, Okla., shows off his trophy after winning the Co-Angler Division at the 2001 Wal-Mart BFL All-American. Kelly, who recorded a total two-day catch of 20 pounds, 4 ounces, won $55,000 in prize money. Photo by Gary Mortenson.
May 11, 2001 • Gary Mortenson • Archives

HOT SPRINGS, Ark. – After turning in one of the most memorable performances in the history of All-American co-angler competition on Thursday, Randy Kelly only had one thought heading into today’s finals: Don’t blow it. Buoyed by a massive 7-pound, 14-ounce largemouth and a total catch of 13 pounds, 5 ounces in yesterday’s semifinal round, Kelly knew that it was his tournament to lose. And, true to form, he did not disappoint.

With only one co-angler remaining with a realistic chance of taking the top prize of $50,000 away from him, Kelly approached the scales to determine his fate. As Aaron Wehmeyer, the current amateur leader, looked on in nervous anticipation with a total two-day recorded catch of 14 pounds, 5 ounces, Kelly knew that he was only 1 pound, 1 ounce away from the title. However, he need not have worried. As Kelly flung his sack of fish onto the scales, it was clear to everyone in the crowded Hot Springs Convention Center that first place was was no longer in dispute. Kelly tipped the scales at 6 pounds, 15 ounces, giving him a whopping two-day total of 20 pounds, 4 ounces.

The co-angler All-American championship was his at last.

“This is the greatest fishing day of my career,” said Kelly, a native of Inola, Okla. “I set a three-year goal for myself and I’ve pretty much accomplished what I wanted to accomplish. I felt real confident yesterday that I could catch enough fish to win. And I did it. It feels great.”

Although Kelly summoned up all of his confidence during today’s competition, last night was a different story. Despite owning a commanding lead heading into the finals, Kelly admitted that the demons of doubt began to creep into his head shortly after he retired to bed last evening.

“I had some trouble sleeping last night,” Kelly acknowledged. “I woke up this morning at 2:30, went out and sat on the curb and watched the sky to clear my mind. This is something special.”

Kelly, who also won an additional $5,000 from Citgo for turning in the top performance of all the BFL points leaders in the tournament, credited his fishing partners for helping to him to victory.

“The guys I fished with this week were the cream of the crop,” said Kelly, who admitted he was in a `huge slump’ before this week’s performance. “And I’m especially grateful to my fishing partner today, Bob Lucas. He just sat there and told me that he wanted me to catch a limit. And he did everything in his power to get me one. I owe him a lot.”

Because of his first-place finish, Kelly won an automatic berth on the FLW Tour next year as a co-angler.

“I talked it over with my wife and we decided that if I had a chance to fish the FLW, I would do it,” he said. “And my wife is going to be there with me.”

So close, yet so far

Despite leading the co-angler division for nearly the entire weigh-in on Friday, Aaron Wehmeyer saw his championship title slip away in agonizing fashion. With only three co-anglers remaining to be weighed-in, Wehmeyer was forced to watch Kelly take the title in the waning moments.

However, he appeared to take his loss in stride.

“I talked to Randy (Kelly) last Tuesday and he sounded really confident,” said Wehmeyer, who won $10,000 for his second place finish. “So I’m not at all surprised that he is up here. Ten thousand dollars isn’t too bad.”

Competition in the Boater Division continues tomorrow at 7 a.m. at the Dare Devil Marina on Lake Hamilton in Hot Springs, Ark.