Christian is man to beat at Mobile 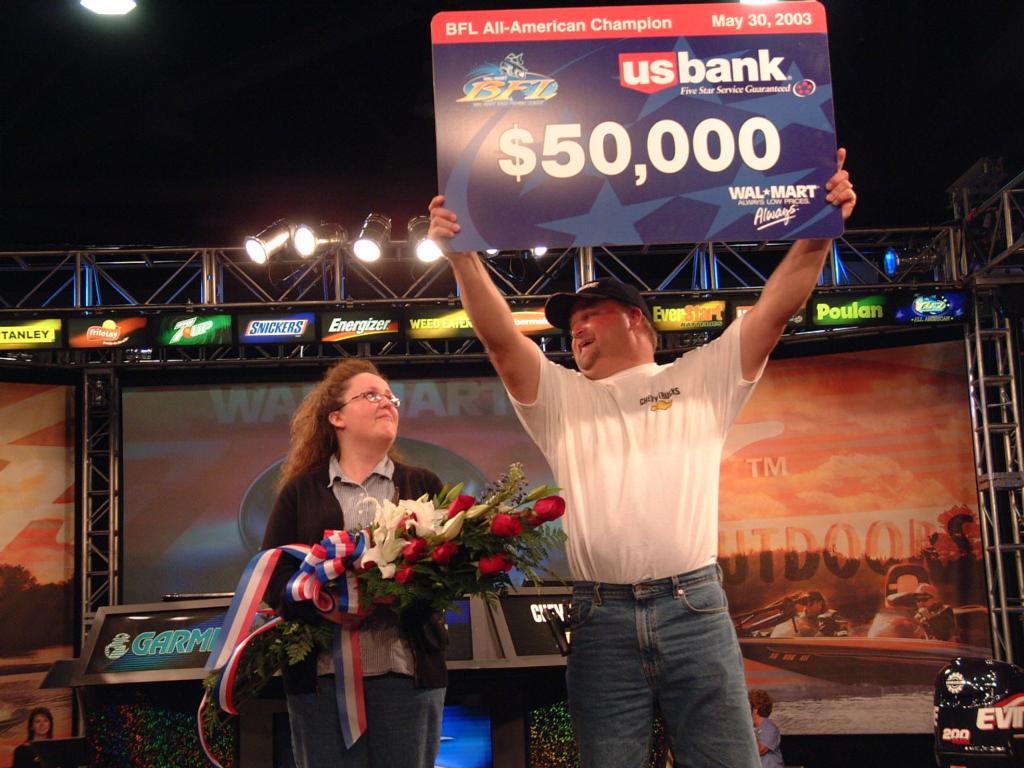 MOBILE, Ala. – BFL anglers might want to start lobbying the BFL tournament directors for a new rule next year that states: During tournament hours any angler named Tony Christian from Hull, Ga., cannot take fishing rods in the boat with him.

It probably wouldn’t make any difference. His competitors now believe that fish just jump into his boat.

Christian has made fishing on the ultrastingy Mobile Delta look easy at the BFL All-American this week. While other anglers are down on their knees praying out loud for a single bite, Christian acts as if he can’t get away from those pesky bass that just seem to follow him everywhere.

“I wasn’t even trying today,” said Christian after weighing in three bass for 7 pounds, 5 ounces today. He now has a total of 16 pounds, 3 ounces.

“I stayed away from my primary stuff today – the place where I caught the two yesterday – and went to fish some other places,” he continued. “I tried to take my co-angler around and get him a few bites and I accidentally caught a few.”

Christian revealed that he is using only two lures: a spinner bait and a jig.

He also said he was fishing two areas: on the Tensaw River and Gunnison Creek on the Mobile River.

“They are on two different rivers, but they are not that far apart,” he said. “It’s all connected by canals and I can run from one place to the other in 15 minutes. One spot is a big current break on the Tensaw River. It’s out in the main current. I have to put my trolling motor on 80 just to hold me there to make few casts. That’s where my big fish came from yesterday. I hope it’s got a couple there tomorrow.”

Speaking of tomorrow, Christian has now amassed a 6-pound lead that will become worthless tomorrow since everyone starts at zero. In fact, he could have made it in the finals on his two-fish catch from yesterday. The three fish he caught today sure would look good tomorrow.

Will the big-fish magician choke? Or will he pull yet another 5-pound-plus bass out of the live well? Tomorrow will tell.

Kenney, out of nowhere

“Those rascals made a mistake today, they gave themselves away,” Kenney said about his fish. “I have been fishing in this little skinny creek for the last two days. And I have been flipping the deep bends in the bank with a Zoom Speed worm. Well, I was flipping around today and I heard a couple of fish blow up in the dollar pad flats on the shallow side of the creek out the other side of the boat. So I fired a speed worm over there and buzzed it across the surface like a buzzbait, and one slammed it. And I was like: ‘Bingo!'”

Kenney started buzzing the speed worm over the dollar pads, caught a limit in an hour and culled once.

Robert Cruse of Broken Arrow, Okla., just keeps cruising along at a steady clip. Today he brought in four bass weighing 5 pounds, 6 ounces for a two-day total of 9 pounds, 9 ounces, which puts him in third place.

“I went to the same area I had been fishing, I just made a little adjustment,” Wright said. “I had been throwing a spinner bait yesterday, but when it got calm in there this morning, I started flipping a Zoom Ultra-vibe craw worm on a 1/4-ounce weight. The fish were up in real shallow grass – maybe only 6 inches deep. That’s how I got my bites today.”

“I think I can catch more small fish in there tomorrow, but I just don’t think this place I am fishing can produce a big fish,” he said. “I have got a ditch off the main river that might be holding a big fish. That’s the only real chance I have got – to catch a limit out of the shallow grass and then catch a big one on a jig in that ditch.”

Lane is riding the tide

“I am fishing the tide,” he reported about his catch. “It’s taken me a couple of days to get the timing right on this spot, but I think I have it figured out now. I caught three pretty quick on it today on the right tide and then let up. I think I can get five fish tomorrow, but I don’t know what they will weigh.

Sevier: From zero to hero

Scott Sevier of Corbin, Ky., surprised everyone, including himself, by coming from nowhere to win the co-angler division with 6 pounds, 8 ounces.

Sevier started dead last this morning after zeroing yesterday. But he scratched and scraped his way back into contention today by being the only co-angler to weigh in a five-bass limit in two days.

But the fight was not over. He then tied yesterday’s leader, John Howard from Alexander City, Ala., who also had 6 pounds, 8 ounces.

The tie was broken by All-American rules that state ties will be broken by day two’s biggest stringer. Since Sevier had more weight today, he went on to win the $50,000 first-place prize.

Sevier flipped up a limit behind his pro partner on a Zoom Baby Brush Hog in sapphire blue. He rigged the bait with a 3/16-ounce sinker.

“I just pitched into the grass and weeds that my pro left behind,” said Sevier. “I tried to get the Brush Hog a little tighter to the cover.”

Sevier says he is going to use the money to buy a new Ranger Boat. “I already know what model I want – a 519,” he said.

Howard, who lost the tie to Sevier, did what he needed to do today: go out and catch one good keeper in order to maintain his lead from yesterday. Unfortunately his one good keeper, a 2-pound, 5-ounce fish, was just 1 ounce short. He tied Sevier and lost the tiebreaker according to the rules.

The rest of the best

The top 10 pros will start over tomorrow for a one-day shootout for $100,000. The action begins at 7 a.m. at the ramp on the Mobile Causeway.