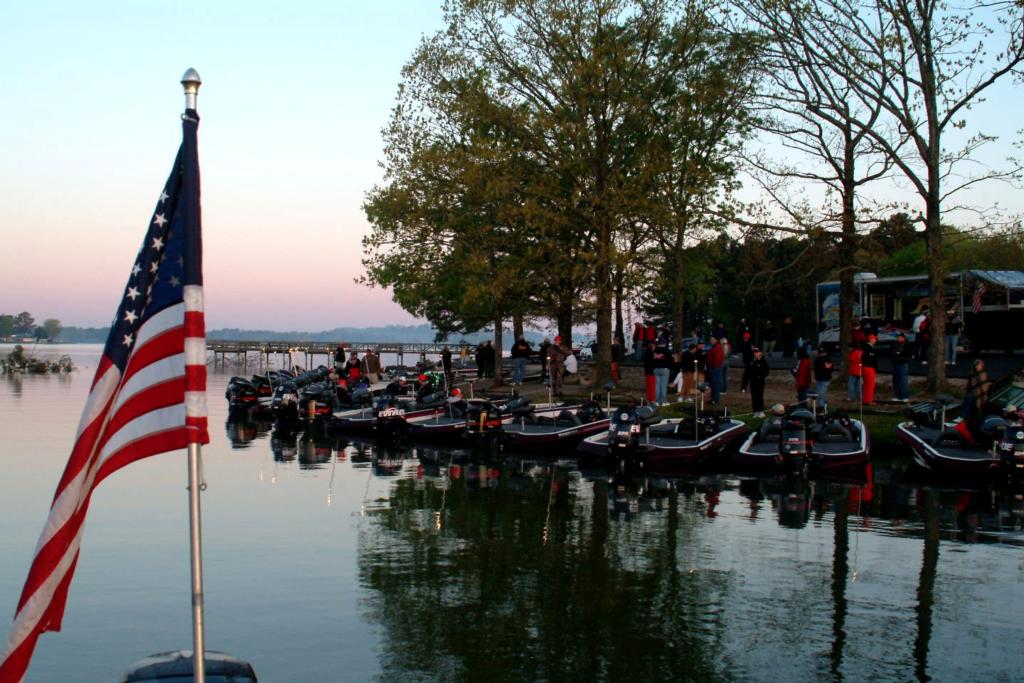 HOT SPRINGS, Ark. – They are called “weekend anglers.” They are not full-time professional anglers, but they are certainly not amateurs, either. During the week they have regular jobs as contractors, firemen, accountants, mechanics and business owners. On the weekends, however, they are all bonded by one passion: competitive bass fishing.

The Wal-Mart Bass Fishing League (BFL) is their circuit – a series of weekend-oriented divisional and regional tournaments that whittle the competition down to the cream of the weekend angling crop. And now that cream, 43 boaters and 43 co-anglers from across America, have arrived in Hot Springs, Ark., for the 2004 BFL All-American – the crown jewel of BFL competition – on Lake Hamilton.

This week these top bass anglers and their families have been treated to an all-expenses paid stay in beautiful Hot Springs.

Normally, the All-American is held in May or early June when most fish are in a postspawn mode. The two previous BFL All-Americans held on Lake Hamilton were during the first week in May (2000, 2001), and both were won by crankbait wizard Jeff Coble of Henderson, N.C.

This year the earlier dates should make Lake Hamilton a different ball game, and sight-fishing might be the dominant fish-catching pattern.

Out on the 7,500-acre lake, bass are cruising the banks in the 58- to 62-degree water looking for suitable places to spawn, and several contestants reported seeing fish on beds during the single practice day on Wednesday.

Past BFL All-American winner Kim Carver of Milledgeville, Ga., said many bass are up cruising around, but only a few have locked on beds.

“Given the conditions, sight-fishing is probably how this tournament is going to be won,” said Carver. “But since we didn’t have a long practice period to scout out a bunch of beds, I think the winner will be the guy who is brave enough to go to some part of the lake he has never seen before and just start looking.”

“There are a few fish up now, but I think it’s going to get even better later in the week with the warming temperatures,” said Mark Jordan of Kevil, Ky., while practicing on Wednesday.

Indeed, a warming trend featuring sunny skies and daytime highs near 80 degrees is favoring the sight-fishermen.

But at least one angler is willing to fish against the grain. Taking inspiration from Coble’s back-to-back

“I don’t think all of the fish are on the bank,” he said this morning. “I’m going to fish offshore for most of the day.”

One thing all anglers will have to contend with today is a breezy south wind forecasted to blow 10 to 15 mph.

Unlike other FLW Outdoors events where anglers start from zero when the cut is made, the top 10 anglers that fish on Saturday will carry their weight over from the first two days.

Many contestants are predicting that it will take a three-day total of 34 to 36 pounds to win.