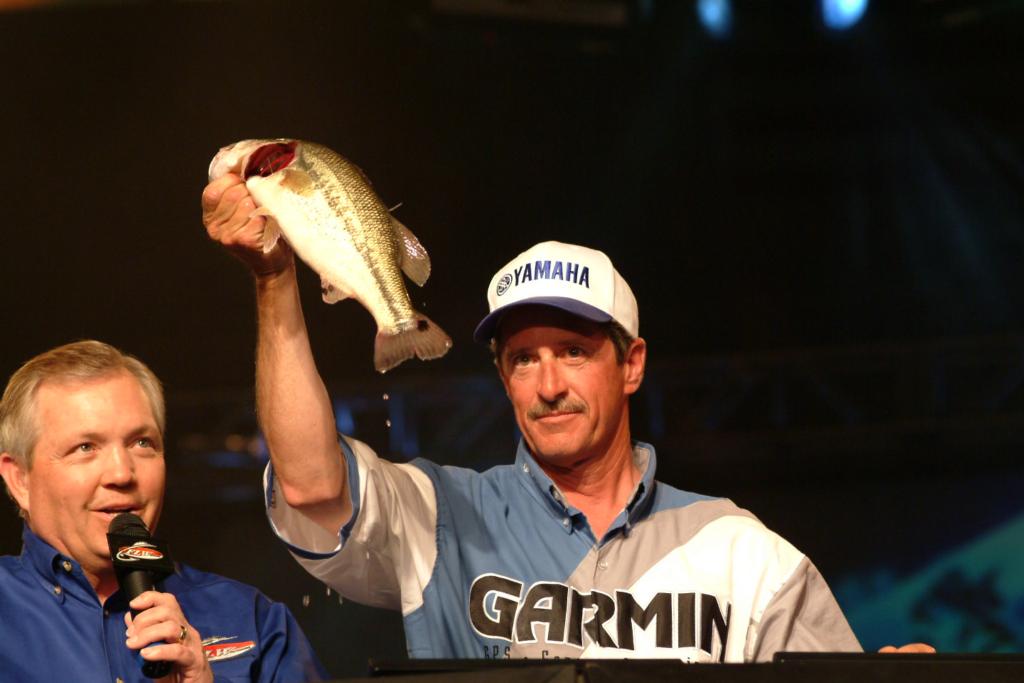 HOT SPRINGS, Ark. – The last few minutes of the 2004 BFL All-American were some of the tensest moments in the championship’s 20-year history. No one in the weigh-in crowd at the Summit Arena was quite prepared for the ounce-by-ounce battle that ensued between the top four anglers during the last 10 minutes.

When the nail-biting king-of-the-hill style weigh-in was finally over, the crowd exhaled as Allen Hayes of Moody, Ala., claimed the $100,000 check for winning by a mere 2 ounces.

Hayes started the day in third place, 3 pounds, 6 ounces off the lead, knowing that his chances of making up ground on Lake Hamilton were slim.

Still, he mounted a charge with a five-bass limit weighing 9 pounds, 8 ounces to take over the lead from Dave Lefebre by just a bass tail with a three-day total of 31 pounds even.

“I just can’t believe it,” said Hayes after accepting his $100,000 check from legendary Ranger Boats founder Forrest Wood. “I had no idea that I even had a shot until about three minutes ago.”

Hayes worked a combination of patterns during the week that included Carolina rigs, jerkbaits, top-waters and spinnerbaits. But it was the spinnerbait bite that delivered the win.

Yesterday, Hayes discovered that Lake Hamilton’s bigger fish seemed to have an appetite for a spinnerbait when he weighed in an impressive 12 pounds, 3 ounces.

“I wasn’t getting near as many bites on the spinnerbait as I was with other baits, but they were definitely bigger fish,” he said. “I started today Carolina rigging and I finally said to myself, `If I’m going to win this thing, I need to stay with the spinnerbait.'”

“I only had six bites, but they were probably a little better than I would have caught if I had kept on rigging,” he added.

And he needed every ounce of “little better” that he could get.

Hayes fished a 1/2-ounce X-Wire spinnerbait shallow to catch three bass early. Then he went to his Carolina rig spot and slow-rolled a 5/8-ounce firetiger colored spinnerbait in 10 to 12 feet of water to finish his limit.

Hayes fished close to the takeoff at the Hatchery ramp in the back of a spawning bay in White Oak Creek. His primary ledge, a 10-foot drop leading into the bay, produced the better fish.

“I’m still speechless,” said the 44-year-old corporate account manager for a beverage company. “In terms of fishing the big leagues on the FLW Tour, I’m going to have to talk that over with my wife and my boss to see what I’m going to do.”

He sight-fished most of the week with a Kinami Norie’s Bug and Zoom 4-inch lizard.

“In the mornings, before the sun got up, I’d blind-cast a Kinami Flash and Zoom Fluke to beds,” he said. “I caught a few that way, but I caught most of the fish off the bed.”

In an extreme effort to get finicky Lake Hamilton bass to bite, Lefebre backed down to 6-pound-test Triple Fish fluorocarbon when sight-fishing.

“To miss winning by 2 ounces kind of hurts because I passed up several pound-and-a-half fish today that would have culled me up a few ounces,” he said. “I was convinced I was going to need a big one to win, and I kept hunting her instead of just fishing for ones I could catch. I just had no idea it was going to be this close.”

Finishing just 2 ounces behind Lefebre was Mark Schafer of Williamstown, N.J., with a three-day total of 30 pounds, 12 ounces.

For Schafer, it was an up and down week. On day one he had an 8-ounce penalty for a dead fish. But on day two he took a commanding lead by 2 pounds, 5 ounces.

Today he brought in just 5 pounds, 14 ounces and missed winning by 5 ounces.

“I had a great week,” he said. “But now I can’t stop thinking about that 8-ounce penalty the first day and a 2-pounder that I lost today.”

“The wooden docks were better, especially where the catwalk met the actual dock,” he added.

The last man to take a shot at Hayes at the final weigh-in was John Devere of Berea, Ky. Devere had weighed in four bass and needed just one more keeper to take the $100,000 from Hayes. But when Devere returned to his boat to get his fifth keeper, he didn’t have one.

He ended up fourth with a three-day total of 30 pounds, 7 ounces, just 9 ounces short of victory.

“I lost the same 3-pounder twice today” said a heartbroken Devere. “It was on bed and I had it on once, lost it, came back about an hour later, had it on again, and it came off.”

Devere cast a 3/8-ounce brown jig on 12-pound-test line around brush piles in front of docks and flipped a 1/2-ounce black and blue jig to the docks themselves. He used the two-jig combination all week in the upriver portion of Lake Hamilton.

Endicott ends up in fifth

Wes Endicott of Joplin, Mo., spent the first two days of the All-American mired in the 10th-place spot. But today he charged up through the field with a 10-pound, 4-ounce catch to claim fifth place with a three-day total of 28 pounds, 5 ounces.