All-American off to soggy start on Connecticut River 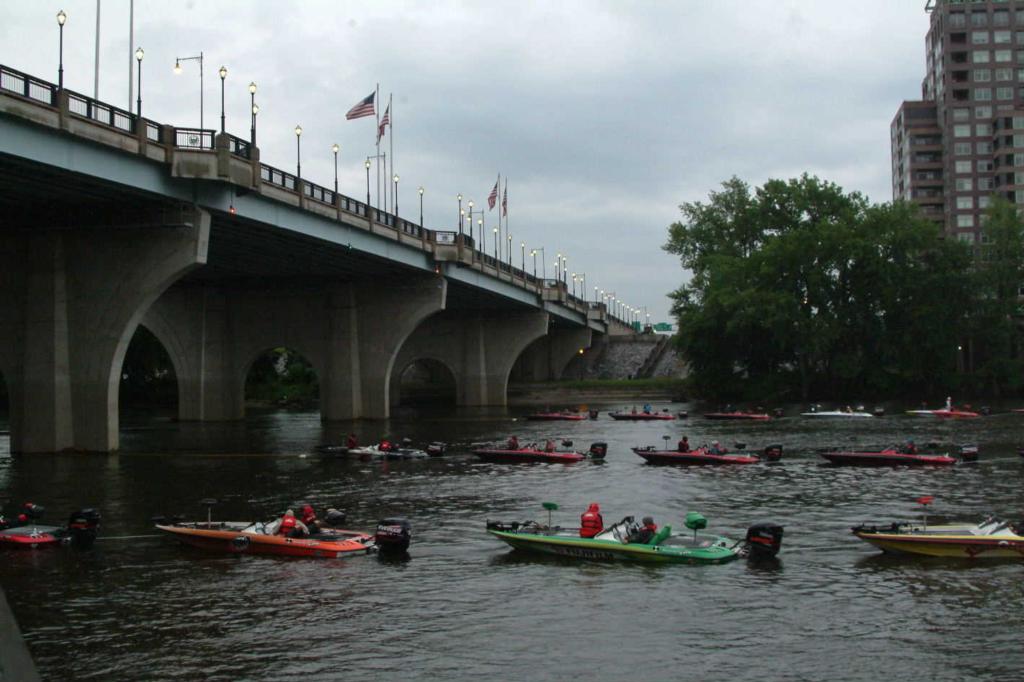 HARTFORD, Conn. – A light rain misted the Connecticut River this morning as the Wal-Mart Bass Fishing League All-American field lined up for the first day of competition. For the 96 grassroots anglers who earned the chance to fish this week, the start of the All-American is often the realization of a dream come true.

Unfortunately, those dreams got off to a soggy start this morning, but the rain is forecasted to move on out by the afternoon. While the rain could put a damper on some of the competitors’ travel plans, the bigger challenge this week is the fishability of the Connecticut River.

“The biggest problem is it’s fishing extremely small,” said boater Robert Walser of Lexington, N.C., who qualified via the North Carolina Division and the Clarks Hill Regional. “We’re fishing 35-acre ponds with six or eight boats in every spot.”

Complicating matters is the simple fact that fishing river systems can be just plain tricky. Walser says the Connecticut River itself is just now getting to the stage where it is fishable, so therefore most of the competitors did not prefish the river, instead concentrating on the backwater ponds.

“We’re mostly fishing little protected backwater areas that they call ponds around here,” he said. “Most of the smallmouths are in the river, so we were mostly catching largemouths.”

The fact that quite a bit of prefishing was done in the backwater areas is what makes today’s rain an unwelcome sight. “It dictated I’m not going to make an hour and a half run,” Walser said. “But I hope 47 other boats do.”

Whether the bass come from the Connecticut River or the backwater ponds, the fishing here, according to Walser, has been pretty solid. He expects today’s leader to have around 14 pounds and predicted it could take 11 pounds or better to make the top 10.

The historic All-American is one of the most prestigious events in tournament fishing, with more than 30,000 anglers annually vying for a shot at the lucrative title. The entire 48-boat field (48 boaters, 48 co-anglers) competes Thursday and Friday for an accumulated two-day weight, and co-angler competition concludes Friday with the winner receiving as much as $70,000. The top-10 boaters advance to Saturday, and the winner is determined by the heaviest three-day weight. The 48 boaters will be casting for a top award of $140,000.

Competition began this morning with takeoff from Charter Oak Landing on Reserve Road in downtown Hartford. Charter Oak Landing will also host takeoff Friday and Saturday at 7 a.m. Eastern time, and competitors will weigh in each day at 4 p.m. at the Connecticut Convention Center located at 100 Columbus Blvd. in Hartford.

Surrounding the weigh-in is the FLW Outdoors Family Fun Zone and Outdoor Show featuring dozens of exhibits from Ranger Boats, Chevy, Berkley, Lowrance, Evinrude, Yamaha and many more premier companies. The doors open at 2 p.m. today and Friday and 11 a.m. Saturday. Admission is free, and the first 300 children 12 and under accompanied by an adult who attend the outdoor show today will receive an assortment of Berkley PowerBaits. On Friday, the first 300 children will receive free Stren fishing line. And on Saturday, the first 300 children will receive a free Rod and Reel combo plus a free FujiFilm camera. One lucky spectator attending the final weigh-in, Saturday, July 8, will win a new Ranger 175VS bass boat powered by a 115-horsepower Yamaha outboard.

For fans unable to attend in person, weigh-ins will be broadcast live on FLW Live at FLWOutdoors.com each day starting at 4 p.m. Eastern time.

Day’s outlook: rain showers ending this morning with ample sunshine in the afternoon