Walser trails by only 6 ounces 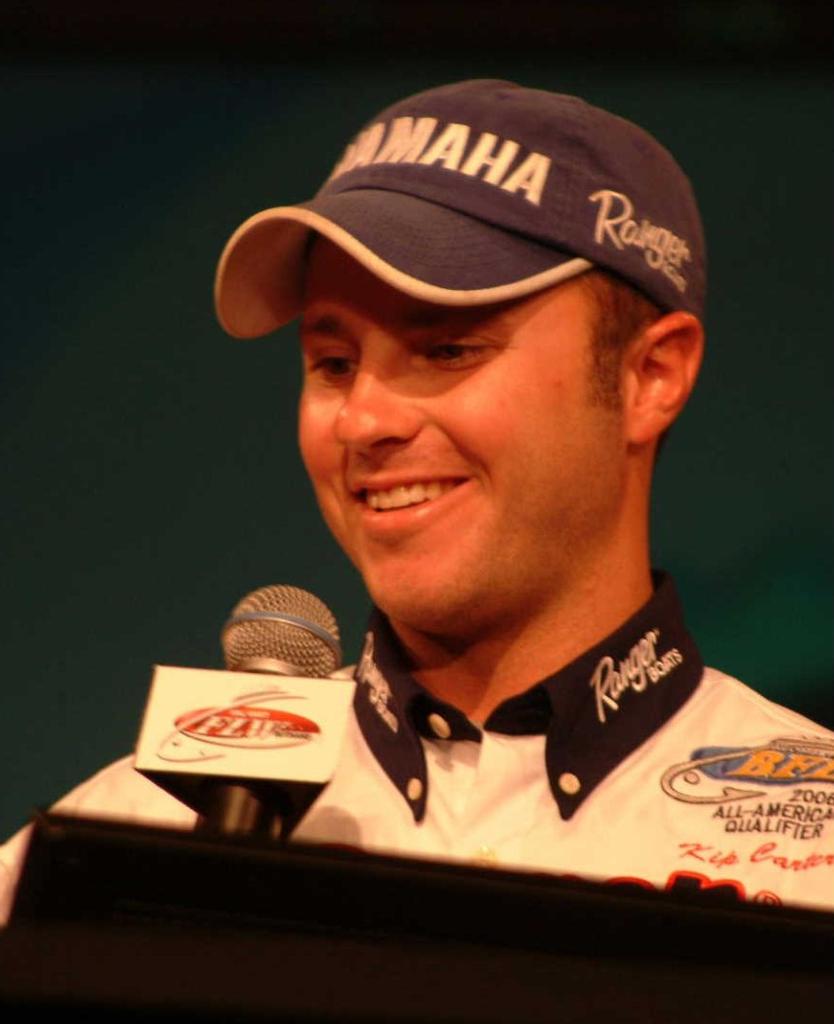 HARTFORD, Conn. – Though some believed today’s bluebird skies wouldn’t adversely affect the fishing, the results proved otherwise on day two of the Wal-Mart Bass Fishing League All-American championship on the Connecticut River. Weights, numbers and limits were all down on day two, but Kip Carter of Oxford, Ga., managed to improve his weight and vault into the No. 1 spot with a two-day total of 23 pounds, 5 ounces.

Carter caught 10 pounds, 12 ounces on day one to land in the fifth spot and caught another limit today weighing 12 pounds, 9 ounces to put up a narrow 6-ounce lead over Robert Walser of Lexington, N.C. Talk is cheap, but after today’s weigh-in, Walser definitely seemed confident. As for Carter, he said he caught the day’s second-heaviest pro limit on a day that could best be described as slow.

“I had seven bites,” he said. “I lost several fish, but I was lucky enough to get a couple of good bites, so it didn’t hurt me too bad.”

One of those good bites was a fish he estimated to be a 4-pounder, a fish that certainly helped him today given his frightfully slim lead. Also complicating matters for Carter is he’s sharing his sweet spot – a backwater area off the main river – with another top-10 competitor.

“I’ve been staying there all day,” Carter said of his hot spot. “It’s a pretty big area. If I can just put them in the boat, I can hang onto (the lead).”

Regardless of Walser’s confidence and disregarding the fact that his honey hole is crowded, Carter remains in the most enviable position here. He is the No. 1 angler heading into the final day of a tournament that pays the winning boater as much as $140,000.

He’s certainly got a head start on that, as he’s currently fishing a solid season in the Stren Series Southeast Division, where he’s presently ranked 48th as a pro. He fished his way to the All-American by ranking 22nd in 2005 Bulldog Division points, which earned him a trip to the Lake Toho regional, where he finished fifth.

Walser adjusts, moves up to second

Exhibiting remarkable consistency, Walser improved his day-one catch by 7 ounces to move one spot up the leaderboard with a two-day total catch of 22 pounds, 15 ounces, good for second. Walser’s day-one catch of 11 pounds, 4 ounces was followed up today with another 11 pounds, 11 ounces to put him just a few ounces behind the leader. To get there, though, Walser first had to make an adjustment.

“My top-water bite did not exist,” Walser said. “Other than that, I did exactly what I’ve been doing. I’m fishing the same places the same way.”

Like Carter, Walser dealt with boat traffic today, but unlike the leader, Walser’s company did not advance to tomorrow’s competition.

“Today I had to wait for people to clear out of my area,” he said. “That will be the plus tomorrow – I won’t have anybody helping me.”

Walser admitted that today’s weather change sounded the death knell for his top-water bite. The tournament kicked off yesterday beneath cloudy, rainy skies, but it was bluebird all the way for day two.

“That’s what affected the top-water bite – the high pressure and the clear skies,” he said. “Plus, the water fell.”

However, it was on stage that Walser exuded confidence, saying, “It’s going to get better.”

Walser is a seasoned veteran fishing his third consecutive All-American. He qualified this year via the North Carolina Division, where he was ranked third in 2005, and the Clarks Hill regional, where he finished fifth.

Yesterday’s No. 13 boater Mike McDonald of Randleman, N.C., caught 13 pounds, 1 ounce today to boost his two-day total to 22 pounds, 7 ounces, good for third. The difference between his day-one total of 9-6 and his better day-two weight was a matter of strategy.

“I had saved a bunch of places for the second day,” McDonald said. “I went in one area and I missed three fish, so I made a long run way down the river.”

There, McDonald’s struggles continued until he figured out a key piece of the puzzle that ultimately put a limit in the boat.

“I picked up a jig and caught a 3-pounder,” he said. “I thought they might be relating to wood. I caught three limits today. It’s a really solid pattern, and I think it’ll work.”

McDonald finished last year ranked 19th in the Piedmont Division to advance to the Lake Cherokee regional, where he finished second to earn a trip to the All-American, his second in two years.

n the fourth spot with a two-day total of 20 pounds is Chad Dorland of Dunnellon, Fla. He caught 9-14 on the first day and improved that just slightly today with a limit weighing 10-2.

“I’m just going to go out and fish,” Dorland said of his day-three plans. “I’ll be glad if it’s another 10 pounds.”

Behind him in fifth is Terry Steele of Sparta, Tenn., with a two-day catch of 19 pounds, 2 ounces. Steele caught 9 pounds, 1 ounce yesterday and improved that by exactly a pound today to move from 14th place to fifth.

Rounding out the top 10 boaters after day two at the All-American:

The top 10 pros will begin their final day of competition tomorrow with a 7 a.m. takeoff from Charter Oak Landing in downtown Hartford. The 2006 All-American champion will be crowned at tomorrow’s weigh-in, which begins at 4 p.m. at the Connecticut Convention Center. The winner is determined by the heaviest three-day weight.