All-American sticks retain leads in both divisions on day two 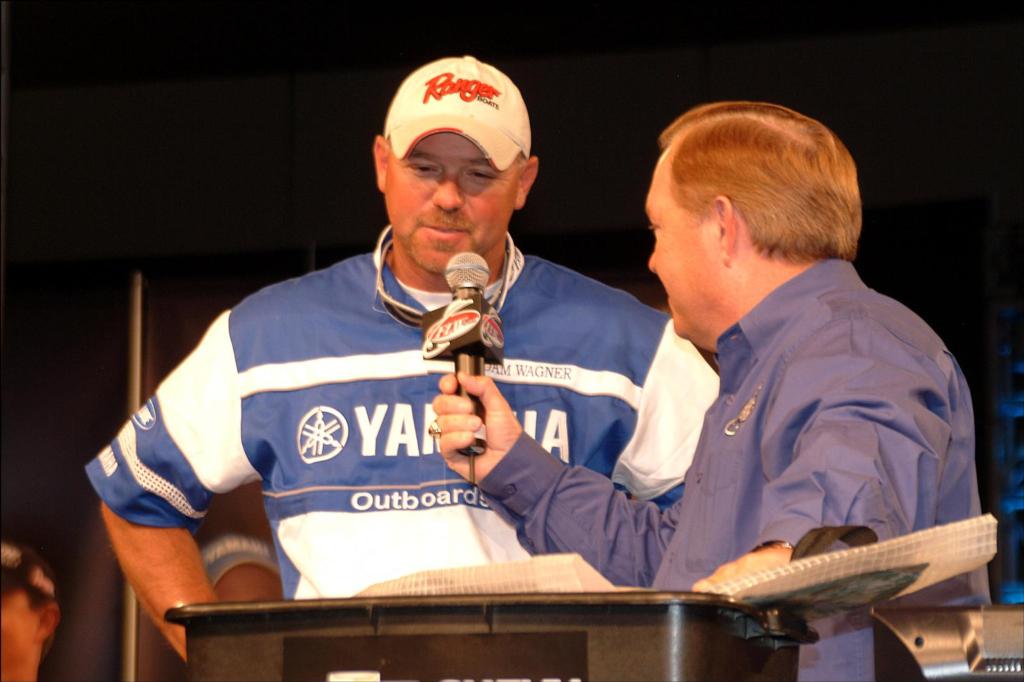 DAVENPORT, Iowa – A good tournament fisherman finds a strong bite and capitalizes on it. A great fisherman consistently milks that pattern across multiple tournament days or adapts when the bite cools. Adam Wagner did both to not only hang on to, but expand, his lead on day two of the Walmart BFL All-American.

This is Adams’ third visit to the biggest show around for weekend bass anglers, and he said he’s “here to win it.” If he sacks another limit Saturday on the Mississippi River like he did over the championship’s first two days, he’ll do just that.

The Cookeville, Tenn., boater landed the fourth-heaviest five-bass limit of the day Friday – 9 pounds, 10 ounces – to add to his hefty 15-9 sack from day one for a two-day total of 25-3. Adams now leads the All-American by 5 pounds, 13 ounces heading into the final day of competition in a cumulative-weight event.

Like yesterday, Adams fished the two eligible pools farthest upstream from the takeoff site of Rock Island, Ill., to land his quarry. He caught three keepers in pool 13 and two in pool 14. Locking that far upstream can drastically cut into an angler’s fishing time, but that doesn’t seem to hamper Adams’ game plan.

Pool 13 is where the big bite is and where Adams swam a jig yesterday, switching to a finesse bite today due to the clear water and local boat pressure. The Senko is 5 inches long in green-pumpkin 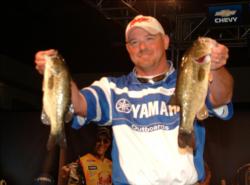 color. His flipping bait is a 3/8-ounce black-and-blue Sweet Beaver.

Adams now holds a considerable lead in the Boater Division, but catching almost 6 pounds less today than Thursday illustrates that one or two big bites can quickly rearrange the leaderboard (see the second- and third-place boaters). So the big question he faces is whether to play it safe tomorrow and bide his time on pool 14, where he said he could likely fish for four hours, or lock through all the way to pool 13 again, where he’d have about half the time to search for big bites.

If Adams, who has finished as the runner-up before in the All-American, can stay consistent enough to win, he’ll earn a first-place award of $120,000 and punch his ticket for the elite $2 million Forrest Wood Cup.

It would seem the Wagner goes with bass fishing like bacon with eggs – at least at the 2009 All-American. Boater Steve Wagner of New Kent, Va., (no relation to Adam Wagner) rocketed up the leaderboard seven positions today to claim the runner-up slot. He added a 10-pound, 2-ounce limit Friday to his day-one weight for a two-day total of 19 pounds, 6 ounces. 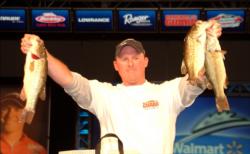 Steve Wagner said he is “getting away from everybody,” stretching the already-long run to pool 13 about as far upstream as possible. With the locking schedule, his primary area leaves him with only an hour to fish.

“I made a bad decision yesterday. I was on a different bite with the frontal conditions,” he said of Thursday’s overcast skies and wind. “I thought they’d be after cruising baits, so I went with a spinnerbait … and a crankbait.”

That tactic only yielded four bass. But Steve Wagner was able to concentrate on a 40-yard stretch of water today in the calm, sunny conditions and focus on bass guarding fry, “trying to ambush bait in shade, lay-downs.” Though he considers himself a power-fisherman, today he was “flippin’ a tube – real light – almost like finesse-fishing” in water 6 inches to 1 foot deep. Tomorrow he’ll try the same tactic in the post-frontal conditions with a tube and a jig.

“I’ve really got to pick (the 40-yard stretch) apart to get bit,” he said of his methodical approach. “I’m crossing my fingers that I can catch five as quick as I did today.”

Moran makes most of day two for third

Another heat-seeking boater to climb the ladder on day two was Russ Moran of Manchester, Tenn. He only needed four bass today weighing 7 pounds, 7 ounces to bring his two-day total to 17-9 and land in 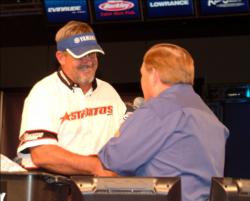 Unlike a majority of the field, Moran – a former Walmart FLW Tour, Walmart FLW Series and Stren Series pro – is fishing south of the takeoff site in pool 17. He found his area while practicing in the Quad Cities earlier in the month, preparing for his first All-American appearance.

“There are five pools here and lots of locking … and everybody was saying, `You’ve got to fish pool 13,'” he said. “I couldn’t sacrifice four hours of fishing time for the bite I found up there.”

Instead, Moran found slack water in a backwater lake with lots of bushes – a setting that set up perfectly for flipping. He said he “couldn’t catch anything” in the Mississippi River current of the other pools during practice. According to Moran, only about a half-dozen other boats have joined him downstream, but a couple of the boaters also made the top 10, so there is a pool 17 contingent that will vie for tomorrow’s top honors.

“I haven’t caught anything on anything but a flippin’ stick and a Strike King jig … in a secret color, black and blue,” he laughed, as the color has been prevalent among other competitors’ baits.

Moran said he’ll continue to flip to a “couple deep banks there with wood on them” tomorrow and hope for the best. 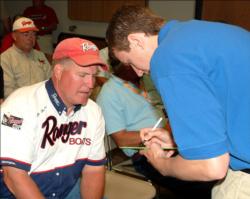 Devere, Edwards round out top five

Boater Mike Devere of Berea, Ky., added three bass for 7 pounds today for a two-day total of 15-14 and fourth place. A longtime veteran of the BFL with 17 top-10 finishes and a win in that league, Devere is also a co-angler on the Walmart FLW Tour and in the Stren Series. He is making his second All-American appearance this week.

Gary R. Edwards of Milton, Ky., fell from third to fifth place today, adding only two bass weighing 3 pounds, 6 ounces to his 12-5 limit from day one for a total of 15-11. He has been fishing crankbaits upstream, mainly in pool 14, and said he experienced “Murphy’s Law” today while his co-angler, Tommy Milligan, found good fortune.

“If it can go wrong, it will – and it did,” Edwards laughed. “I’m around the right fish though – my co-angler did good.”

Rounding out the top 10 boaters to make the cut on day two of the 2009 Walmart BFL All-American:

The Folgers Big Bass in the Boater Division was caught by Wesley Harris of Rustburg, Va. It weighed 4 pounds, 7 ounces and earned him $500. 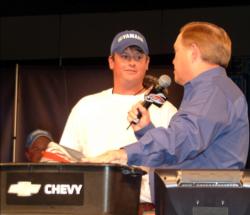 Adams hangs on to lead in Co-angler Division

Dickson Adams of Woodstock, Ga., only managed one keeper bass Friday weighing 1 pound, 15 ounces, but it was enough to keep himself in the driver’s seat of the Co-angler Division heading into Saturday’s finale. The single fish boosted his day-one limit weight of 11-14 to a two-day total of 13-13, trimming his lead to 1 pound, 12 ounces.

Adams fished upstream along riprap near a boat ramp in pool 14 with boater Wesley Harris on opening day. Today he was in the back of Gabe Herrington’s boat, fishing closer to the takeoff site “in a little creek near the lock” in pool 16. He caught his lone keeper Friday on a black-and-blue 3/8-ounce jig he custom-made himself along with a black trailer.

“Yesterday was the day I caught my big bag on a crankbait,” he said, adding that he fished the jig much deeper today – in about 10 feet of water – “throwin’ it in the current and bouncing it off chunk rocks. All of my fish came off rocks.” 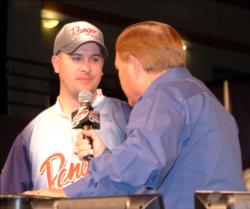 Moving up one slot Friday to second in the Co-angler Division, David L. Deciucis of Richmond, Va., caught two bass weighing 4-2 to add to his five-bass limit from day one for a two-day total of 12-1.

When asked how he caught his couple Friday, he said, “Like I caught `em all – finessing them.”

Deciucis is fishing his first All-American this week, but has four top-10 finishes including a win from the back of the boat in BFL competition.

Rounding out the top 10 co-anglers to make the cut on day two of the Walmart BFL All-American:

Woody Parks of Lincolnton, Ga., caught the biggest bass in the Co-angler Division: 3-14. It earned him 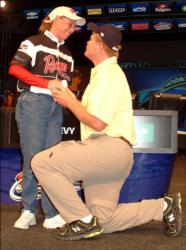 the Folgers Big Bass award worth $500.

The All-American has a 25-year history, but it is not impervious to firsts. This week marks the first time a woman has competed among the ranks of the best weekend anglers in the nation.

Belinda Lewis of Lawrenceburg, Tenn., qualified for the BFL championship via the 2008 Chevy Trucks Wild Card event, and though she didn’t make the cut, placing 43rd among co-anglers, she still experienced a whirlwind week. She earned $1,500, but the much greater prize was that of her engagement.

Boyfriend Scott Towry, also of Lawrenceburg and a BFL angler, proposed to her onstage during Friday’s weigh-in. An emotional Lewis said yes without hesitation, and the two plan to continue fishing the league and striving to return to the All-American to celebrate their anniversaries.

All-American competition resumes Saturday at 7 a.m. when the top 10 boaters and 10 co-anglers take off from Sunset Park Marina in Rock Island for a final day of fishing.