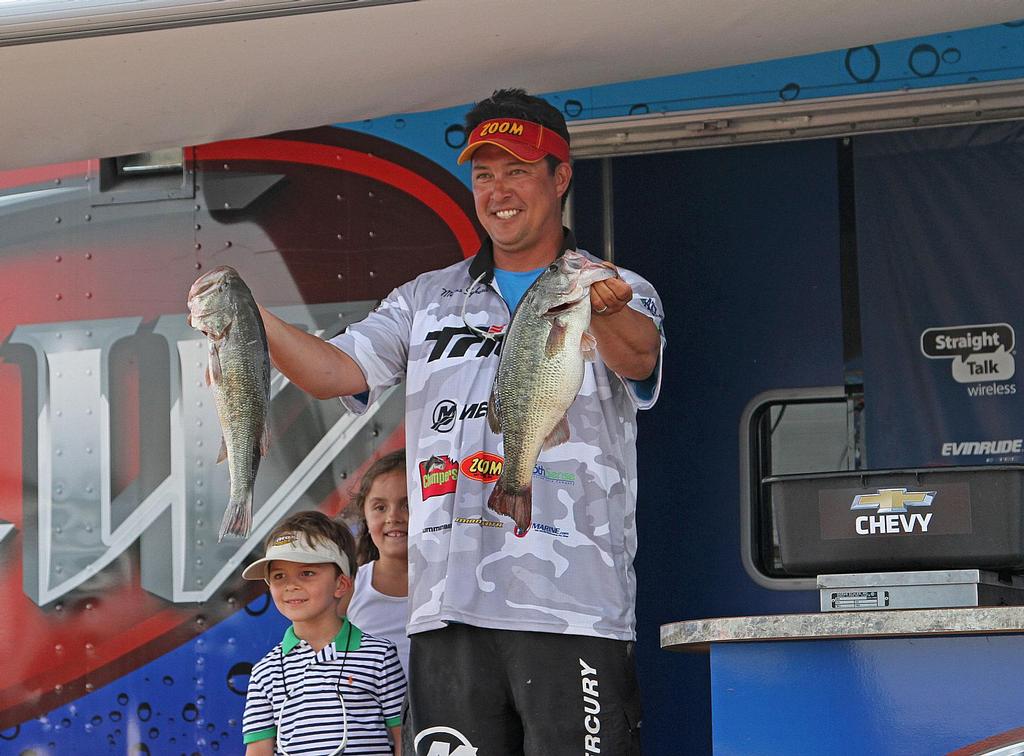 FLORENCE, Ala. – To say that Marcus Sykora is leading the Walmart BFL All-American on Wilson Lake is tantamount to calling Michelangelo a church painter, or terming Noah just a boat builder. Without question, the seasoned angler from of Osage Beach, Mo. is on something really special and his performance thus far has been nothing short of complete dominance.

Sykora blasted out of the gate with a day-one limit of 26 pounds, 11 ounces and established a lead of 5-6.

Impressive, huh? Well, hold on cowboy, this bull’s just get warmed up.

Sykora again blew away the field with a second-round catch of 27-4 that pushed his two-day total to 53-15.

His day-two weight was 5 pounds, 10 ounces heavier than the next largest bag and Sykora’s new lead of 14-6 is more than the average daily weight of more than half the field.

“It’s unreal,” Sykora chuckled. “It’s like there’s a little button down there and every time my crankbait hits it, the spot kicks out a 5-pounder.”

Fishing about a quarter mile downstream of the Wheeler Dam, Sykora caught his fish in about 15 feet 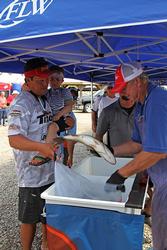 of water over an underwater bar. Both days, he found his greatest concentration of fish in an area with a half-moon shaped notch on the side of a point.

He surmises that the spot benefits from current created by the dam’s water releases, while eliminating the churning mayhem of the tailrace.

“To be honest, I’ve never seen anything like this before,” Sykora said of his spot’s abundance. “I think it’s the subtlety of that indent in the bar. Also, I think that the current is coming through and there’s something that funnels or reroutes that current. The only time I’ve seen anything remotely like this, it was current-related.”

Sykora had his first day’s weight by about 9 a.m. but securing today’s pot of gold required traversing one rocky rainbow, as Wilson Lake delivered a humbling dose of heartache en route to happiness. In a span of about 45 minutes, Sykora lost three fish between 6 and 7 pounds.

Normally, I’m reticent to report on the big ones that got away, because we only lose big’ns, right? This time, your humble correspondent witnessed the losses from a media boat. All three fish got big air and all three had jaw-dropping girths. Two threw the crankbait; one came upbuttoned when the O-ring on the rear treble detached. 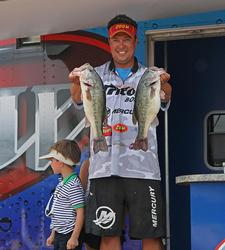 Sykora’s not easily rattled, but that kinda stuff gnaws at one’s confidence. Fortunately, persistence rewarded the tournament leader and within five minutes of his third loss, Sykora boated a 3 1/2-pounder that culled. About five cast later, a solid 5 got him back on track.

“I was so blessed to be able to get off to such a good start that I really do feel that regardless of the size of fish that I lose, I’m going to get another opportunity,” Sykora said. “You can never dwell on the past. You have to be looking to the future and you have to have a positive outlook.

“Is it aggravating? Yes. Is it frustrating? Yes. Does it hurt? Yes. But at the end of the day, it is what it is and there’s nothing you can do about it so let’s move on.”

Sykora’s certainly hoping for plenty of chances on day 3. The first two days, he laid off his fish once he had what he thought he needed. In the final round, he said he’ll work the spot for all he can get.

Moutogiannis moves up to second

Dino Moutogiannis, of Newington, Conn., placed eighth on day one with a limit weighing 17-15. On the 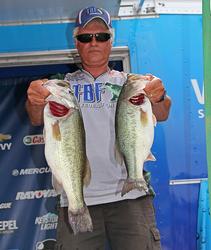 second day, he upped his game and weighed in a limit that went 21-10. This earned Moutogiannis a final-round berth with a tournament total of 39-9.

Kevin Edwards, of Knoxville, Tn. moved up to third from his seventh-place spot on day one. His second-round weight of 20-10, paired with his 18-2 from day one gave him a total of 38-12. 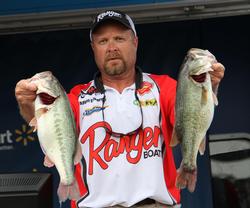 Edwards said he basically stuck with the same ledge-fishing game plan he followed on day one – cranking a Strike King 10XD and slowly dragging a big Texas-rigged worm and a Zoom Brush Hog on a Carolina rig. Today, the fish showed some preferential differences.

“It was just timing today – I threw it at the right time. I picked it up and it was bam, bam, bam. I caught all of my (weight) in the afternoon. I struggled today and I probably didn’t have a fish until after 12.” 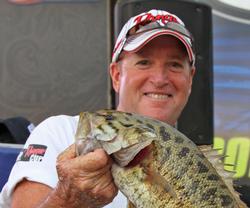 Nichol reported adjusting his tactics from what he did on day one. He started with the finesse jig he used yesterday, but had to adjust that presentation when he determined that the fish had moved deeper. Today, a ¾-ounce jig with a Strike King Rage Craw trailer did the trick.

“I lit them up early and caught a couple of fish early, but I lost a 7 pounder about 30 minutes into the day and I think that spooked the school,” Nichol said. “After that, it was just one here and one there.” 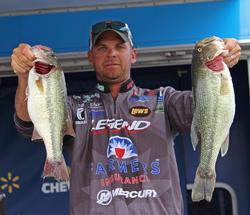 Todd Castledine, of Nacogdoches, Texas caught a limit of 16-4 and slipped a couple of notches to fifth with a total weight of 36-11. Castledine fished crankbaits and Texas-rigged plastics.

“Yesterday, I drove around and killed a whole bunch of time looking for stuff that never helped,” he said. “I pulled back up on one of my spots and caught two big ones. Today, I was worried about how much traffic it would be getting so I figured if I stayed on it, I’d be the only one on it.

“It worked out for the top-10 (cut). I caught them early in the morning and I only culled once after 9:30 a.m. Tomorrow, without as many boats, I’m going to hit spot and then go fish everywhere. 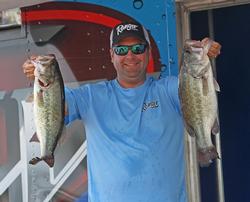 Cothran caught his fish on crankbaits and soft plastics.

“It was an incredible day – it was non-stop action until we left the fish,” he said. “The key was my boater. He just found that huge school of fish.

“I had my limit by 9 o’clock and my 11 o’clock I had my weight. I told my boater that when I got that kind of weight I’d sit down (and stop fishing), so I stopped fishing at 11 o’clock.”

Lee Black, of Danville, Ala. took third with 33-9. In fourth place, John Bedingfield, of Loganville, Ga. had 33-0 and Brandon Maynard, of Cookville, Tenn. took fifth with 32-12.