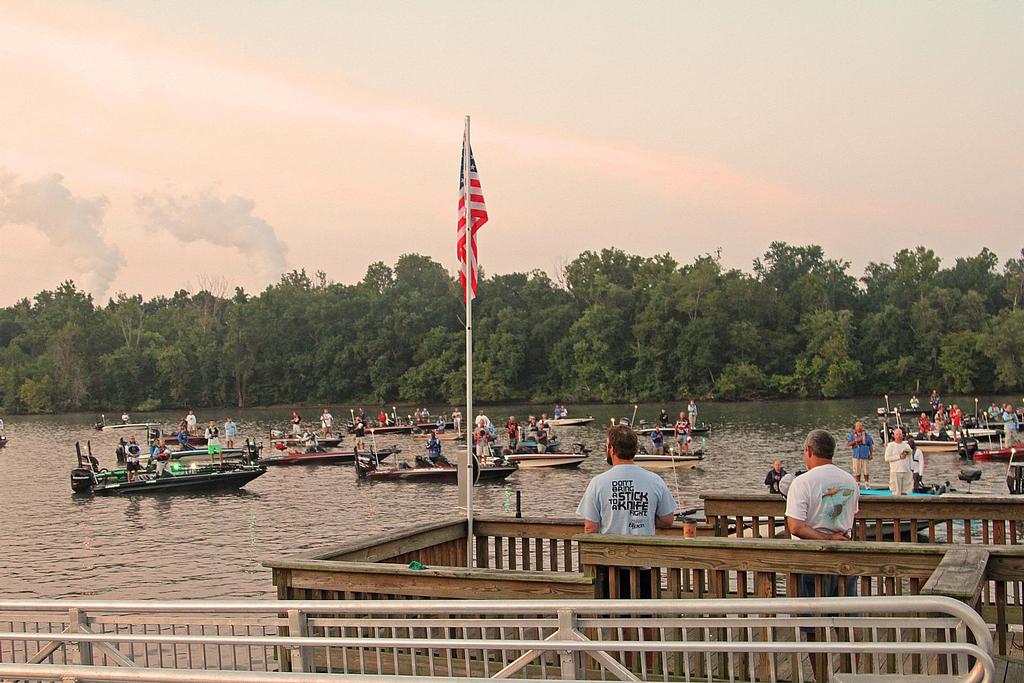 A calm, muggy morning greeted anglers for day one on the James River. Photo by David A. Brown.
October 10, 2014 • David A. Brown • Phoenix Bass Fishing League 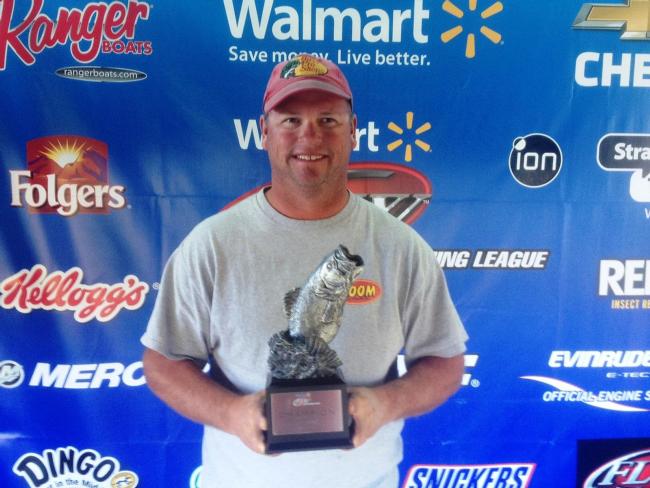 Low tide on the James River during the BFL Regional Oct. 2-4 proved highly productive for Chris Daves, as the angler from Spring Grove, Va., topped a field of 40 boaters from the Northeast, Piedmont, Shenandoah and South Carolina divisions. His three-day total of 33 pounds earned him a Ranger Z518C with a 200-hp outboard and a Chevy 1500 Silverado, along with an entry into the 2015 Walmart BFL All-American presented by Chevy.

Starting upriver from the Osborne Landing launch site, Daves worked wood cover in less than 2 feet at the mouths of “pits” – small tributaries in which shad were gathering. He caught fish on a Lucky Craft 1.5 square-bill crankbait in olive shad. In spots too tight for the crankbait, Daves pitched a 1/2-ounce black-and-blue jig with a blue sapphire Zoom Chunk trailer.

The pair of baits produced during the morning’s low incoming tide until about 11 a.m., as rising water dispersed the fish. That’s when Daves ran south to Chickahominy Creek, where the water had already started falling.

“My plan was to fish the lowest water I could possibly get to,” Daves says. “I’ve lived here all my life, and the lower the water, the more bites you’ll get.”

In the Chick, Daves fished shallow grass with a homemade 3/8-ounce buzz bait. Many fish were simply nipping at his baits, so Daves shortened the profile by trimming the buzz bait’s skirt and fishing it without a trailer. Adding a 4/0 trailer hook also helped snare the short-strikers, including one of his biggest.

In simplest terms, second-place boater Chris Panetta found his bites in the food trough. For the entire tournament, he fished the back end of the Chickahominy and targeted a 30-yard-long ditch off the main creek channel. This fertile spot gave him a tournament total of 32 pounds, 2 ounces.

With a depth of 7 feet on high tide, Panetta’s tidal trough had three primary pieces of cover: a patch of water cabbage, a few logs and a brush pile. Most importantly, Panetta says, the spot faced right into the current.

“All those fish had to do was sit there and wait for the shad to wash over,” says Panetta, who fished outgoing and incoming water at his spot. “Basically, anytime there was current in the ditch was a good time.”

Panetta’s primary bait was a Rapala DT-6 crankbait in a shad color. His first fish of day one was a 6 1/2-pounder, and the spot continued reloading throughout the event.

When the rising tide rendered his crankbait less effective at reaching the cover, Panetta switched to a 4-inch Riot Baits Streaker swimbait in bad shad color. He rigged the swimbait on a 1/4-ounce Boss football head, which he had hand-painted black.

“The Streaker has good action by itself, but the football head just gave it a better wobble,” he explains. “Also, these fish just grab at the bait, so the football head’s exposed hook gave me a better chance of hooking them.”

Josh Wagy, of Dewitt, Va., figured he’d save the socializing for the weigh-ins, so he snuck off to one of his favorite – and blissfully less-trafficked – tributaries off the Chickahominy and camped out there to avoid company. Wagy fished a mix of shallow wood cover and brush piles where he sacked up a three-day total of 30 pounds.

Wagy’s main bait was a SPRO Little John MD. He started with a chartreuse-and-black bait, but had a sexy shad on standby. Basically, Wagy gave each spot five to 10 casts, and if nothing bit, he’d switch colors. With either, impact was imperative.

“You really had to make that crankbait bounce off the cover to get a reaction bite,” Wagy says.

Noting that most of his bites came with low and outgoing water, Wagy says he backed up the cranking presentation with a 7-inch Berkley PowerBait Power Worm in blue fleck. He Texas rigged the worm with a 1/4-ounce Eco Pro Tungsten weight and a 3/0 Owner offset worm hook.

Wagy fished his baits on 16-pound-test Gamma Edge fluorocarbon. This, he says, was more for protection than presentation.

“There were a lot of barnacles where I was fishing, and they can cut your line easily, so I went with heavier fluorocarbon to keep from losing fish,” Wagy explains.