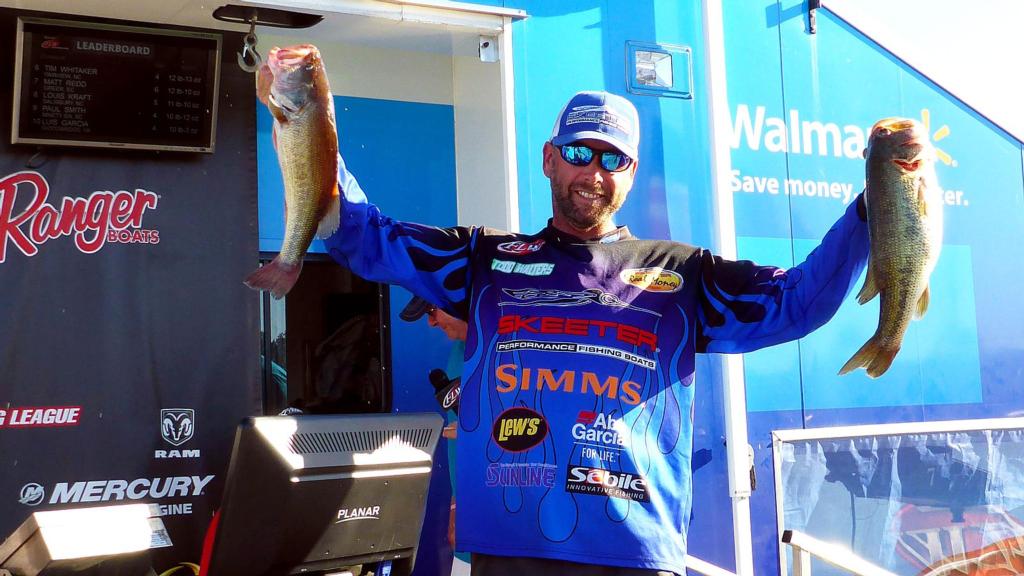 The turning of the tables was sweet for North Carolina angler Todd Walters.

A year later, at the 2015 Regional on Lake Wateree in South Carolina, which was held Oct. 15-17, it looked at first like Smiley and Walters might experience a similar outcome. Smiley held the two-day lead. At the final weigh-in on Saturday, Walters weighed in before Smiley and took over the first place. But Smiley would have the final say as the last angler to the scale.

Unfortunately for Smiley, it wasn’t his day. He weighed only three fish. The two anglers flip-flopped positions, with Walters winning the title by 11 pounds over the next highest finisher and Smiley ending up in third. 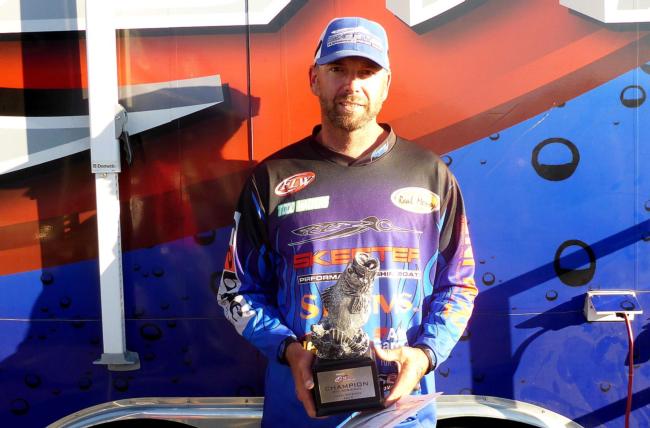 “I knew that with 179 boats, Lake Wateree was going to fish small and that it would be important to find fish in different areas and to be able to catch them in different ways,” Walters says of his tournament strategy.

He found a good group of fish in the dirty water up the Wateree River that he thought could be valuable but that he suspected he couldn’t work very hard if he wanted to catch some all three days. His secondary pattern was to fish brush in the clearer waters of the lower end of the lake.

“On the first two days I went upriver and caught a few fish, and then I left those alone and went looking for fish in other areas,” Walters explains. “Today, [Saturday, day three] I didn’t hold anything back.”

Lake conditions changed daily following South Carolina’s extensive flooding the week prior to the tournament, and Walters’ lower-lake pattern actually improved as the tournament progressed. In fact, despite pouring it on upstream on his river fish, Walters still weighed three of his final-day keepers from the lower end’s brush piles.

Up the river, Walters focused primarily on rocky cover, and he caught fish on a Rapala DT6 crankbait and a 7/16-ounce homemade green pumpkin jig matched with a Zoom Super Chunk trailer.

He used the same jig down the lake in the brush. Walters also Texas-rigged a black neon flipping tube with a 5/16-ounce weight for flipping brush.

Up and down the lake, Walters caught most of his fish in water that was 1 to 10 feet deep. 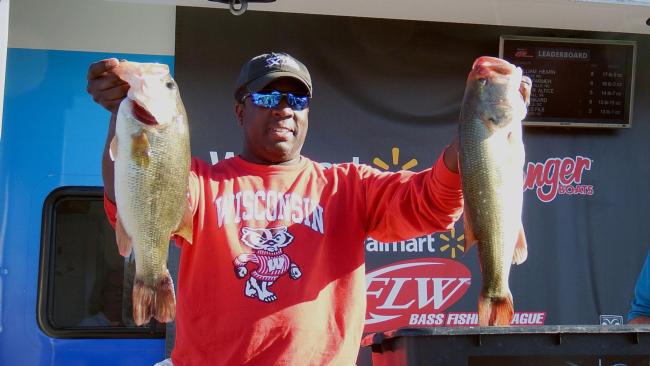 Corry Flips His Way to Second

Runner-up boater Russell Corry of Shelby, N.C., was only able to practice half a day for the Regional, but that suited him fine.

Although he had to adjust bait placement and presentations as the tournament progressed, Corry flipped a Missile Baits D Bomb from start to finish, focusing his attention on the dirty-water areas in the upper end of the lake.

On day one, bass were apt to be along edges of the flooded willows, and when Corry dropped a bait through the vegetation and shook it a little the bass would hit immediately. As the tournament progressed, the bass moved farther and farther into the cover, presumably because of fishing pressure. By day three he had to punch through the thickest cover, hold the bait still and wait for the fish to come get it.

“I saw plenty of other guys fishing the water willow, but it didn’t look like anyone else was really punching the middle of it,” he adds. 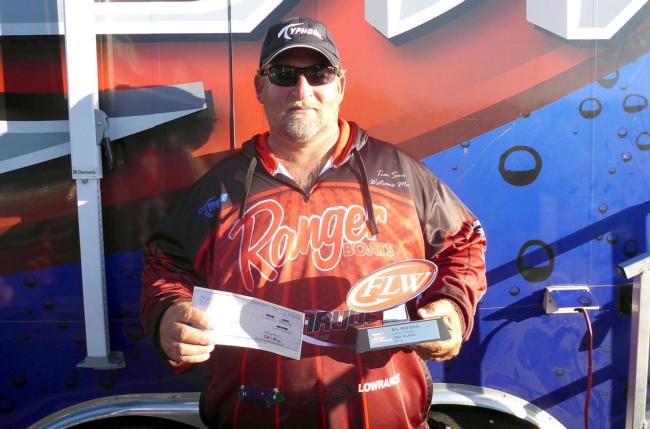 While Tim Smiley wasn’t able to hang on to win a BFL Regional two years in a row, he did manage a third-place finish at Lake Wateree.

“I didn’t have a great practice,” Smiley says. “However, I caught a decent fish with a bait I really like to throw and found an area with some fish, so I decided to just put my head down and fish.”

That bait, a small chartreuse and green square-bill crakbait, produced a 5-pound-class bass on the first day of the tournament and the biggest part of Smiley’s overall catch. He also caught some on a Yamamoto Senko rigged on a 1/4- or 3/16-ounce shaky head and bounced along the bottom.

Smiley primarily fished in less than 3 feet of water, and he focused on rocky cover and to a lesser degree on wood.

Like many other anglers, Smiley had a more difficult time on Saturday, whether due to cumulative lake pressure, a lack of current or other changes in conditions. He caught quite a few fish, but only three that exceeded the 14-inch minimum size limit on Lake Wateree. He finished with 35 pounds, 2 ounces. 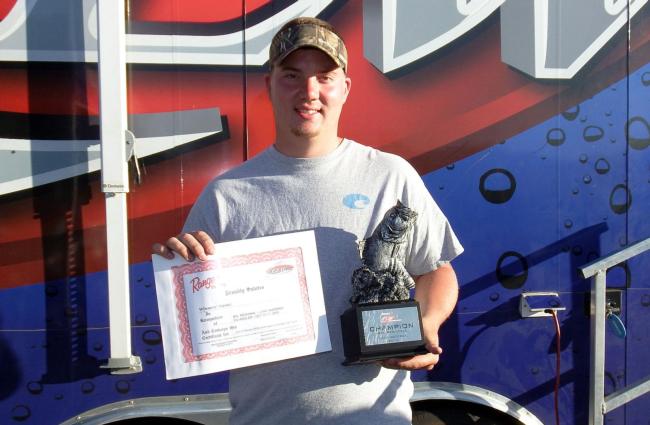 In his first year as a BFL co-angler, William Hearn of Mount Holly, N.C., managed to take the Lake Wateree Regional first-place title and earned the Ranger boat that goes with it. Hearn’s three-day winning weight of 22 pounds, 7 ounces topped his nearest competitor by more than 2 pounds.

As is commonly the case for anglers competing from the back of the boat, Hearn fished different types of cover and water all three days of the tournament. Day one’s target area didn’t really line up with the kinds of spots that Hearn expected to produce.

“I decided to just put on a shaky head and start fishing,” he says.

The finesse approach earned Hearn the two-day lead by more than a pound. And on the final day, he caught three keepers, while only two other anglers managed to catch a keeper bass – they caught one apiece. Hearn easily held on for the win.

Hearn gives credit to day-two partner Tommy Goforth, who saw that Hearn was in contention and intentionally put on him on good water and chose to not fish a shaky head himself in order to avoid catching fish that otherwise might take Hearn’s bait.

Hearn caught his fish on a green pumpkin Zoom Trick Worm fished on a Spot Remover or Owner shaky head. He fished the bait slowly and tight to the bottom on 10-pound test.

The top 6 boaters and co-anglers qualified to compete in the 2016 Walmart Bass Fishing League All-American, which is a televised event with a six-figure payday and a boater berth in the Forrest Wood Cup on the line.