Lawyer Stays in First at All-American 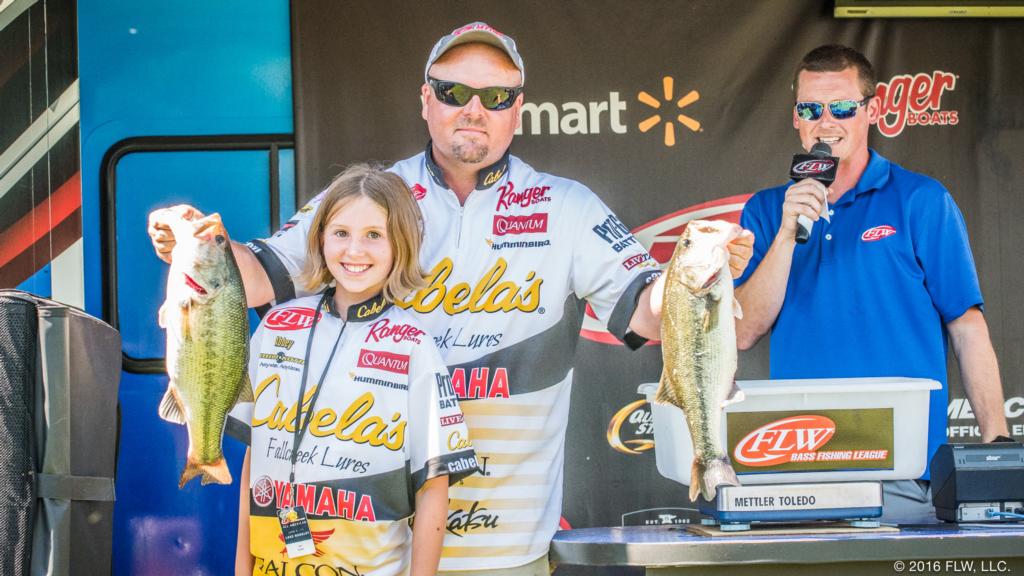 Missouri pro Jeremy Lawyer put distance between himself and current second-place fisherman Drew Boggs on day two of the FLW Bass Fishing League All-American at Lake Barkley hosted by Cadiz-Trigg County Tourism with a 14-pound, 12-ounce limit. It gave him a two-day total of 33 pounds, 2 ounces, while Boggs has 28-13 after weighing in 11-09. Lawyer hopes to put the title away Saturday when the top 10 contenders and their co-anglers compete in the championship round.

Although Friday’s fishing could only be described as dismal for most of the 49 boaters and their co-angler partners, it didn’t have much effect on the top 10 as only two anglers were bumped from the list. If anything, the finalists were mildly surprised and greatly relieved to reach the championship round, and it serves as a compliment to their ability to adjust to trying circumstances. Depending on whom one asks, the fish have been playing hard-to-get because of a decrease in current, uncomfortably high water temperatures near the bank, scattered shad that aren’t schooling offshore yet because the water’s too cold, too much fishing pressure or all of the above. Only 20 limits were brought in – 17 by boaters and three by co-anglers.

Lawyer, who had 18-06 in Thursday’s opening round, didn’t have a keeper until 9:50 a.m. on day two, despite a well-laid offshore approach that had him fishing stair-stepping ledges festooned with stumps at the mouths of large feeder creeks, channel ledges and brush piles planted in water anywhere from 6 to about 14 feet deep. Fortunately for him, he had an abundance of choices.

“I didn’t catch any fish anywhere I caught them on Thursday,” says Lawyer, who was the All-American runner-up in 2015. “I fished 10 different baits and even picked up a spinning rod, which is not something I normally do. The fish just aren’t biting. I don’t know why that is; this place has me stumped. I do know I’m cutting back to about five rigs on Saturday. I’m going to tie on baits that, if they get in front of fish, they’re going to get ate. I said it before: It’s just a grind, and you’ve got to grind it out with them.” 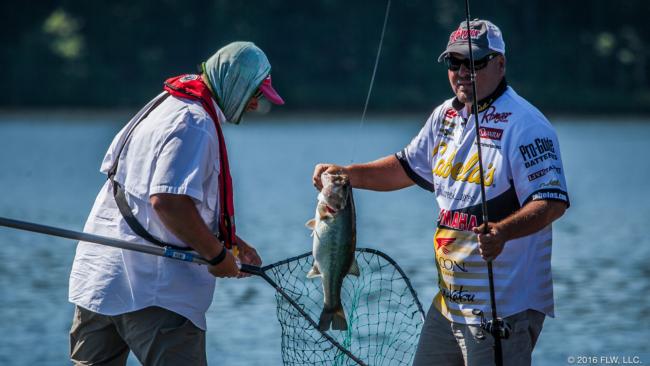 Lawyer’s biggest concern is the dearth of fish early in the morning. While the flipping specialists have been catching bass from the get-go each day, Lawyer’s fish have been showing up later. There’s practically no current in the morning, but, then again, it hasn’t been helping him too much in the afternoon when it picks up a bit.

“I need to figure out how to get more bites in the morning. I’m going to think about it. I might run some and try some new stuff,” he says. “I can’t count on an offshore bite early. It’s not much better in the afternoon when there is a little current running. You’d think the current would get the fish going a little bit, but not much where I’m fishing that I can tell. I think the wind that came up in the day Friday helped more than the current did.”

If Lawyer seems to be a bit flummoxed by what he should be doing in the championship round, it’s no less of a puzzle for the rest of the top 10, who don’t seem too confident in their prospects or generous in their expectations. Still, they’ve fared better to this point than the ones who won’t be fishing Saturday.

Boxing champion and sometimes philosopher Mike Tyson once dismissed the pre-fight notions of an opponent by musing that, “Everyone has a plan ’til they get punched in the mouth.”

While bass tournaments are hardly comparable to boxing matches, many an All-American contender with well-laid plans became discombobulated this week by a figurative punch in the mouth from Barkley bass that were there one day, gone the next or never there at all.

The agony of musing that one more bass, one more good cast to the right spot might have boosted an angler into the championship round is excruciating, but such is fishing. And there’s consolation in knowing that wherever he finished, a competitor in the 2016 All-American was for certain among a handful of qualifiers who were actually there, out of the several thousand others who wished they could have been.

The final weigh-in is set to begin at 5:30 p.m. Saturday at Kentucky Dam Village Marina following the semi-final weigh-in of the Walmart FLW Tour event being staged simultaneously on Kentucky Lake. 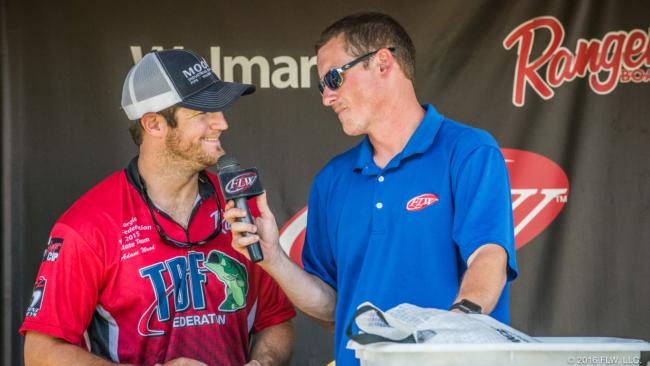 By David A. Brown

Day two of the FLW BFL All-American on Lake Barkley served Adam Wood a completely different picture than the opening round, but the Guyton, Ga., co-angler responded by adding three keepers for 9 pounds, 5 ounces and taking the lead with a two-day total of 20 pounds.

On day one, Wood fished offshore. Today, he and his boater, Andre Dickneite, ran up Little River, where Wood caught his fish flipping and dragging baits. A late-day move proved critical to his success.

“It was just about grinding all day, and when you got the chance to make a cast, making a cast,” Wood says. “This afternoon we made a change late in the day and pulled up on a spot, and they were there and biting. My boater and I put five fish in the boat, and four of them were keepers.”

The top 10 boaters and co-anglers take off from Lake Barkley State Resort Park Marina at 7 a.m. on Saturday for the final round of competition. Saturday’s weigh-in begins at 5:30 p.m. on the Walmart FLW Tour stage at Kentucky Dam State Park Marina in Gilbertsville, Ky. It'll be broadcast live on FLWFishing.com.