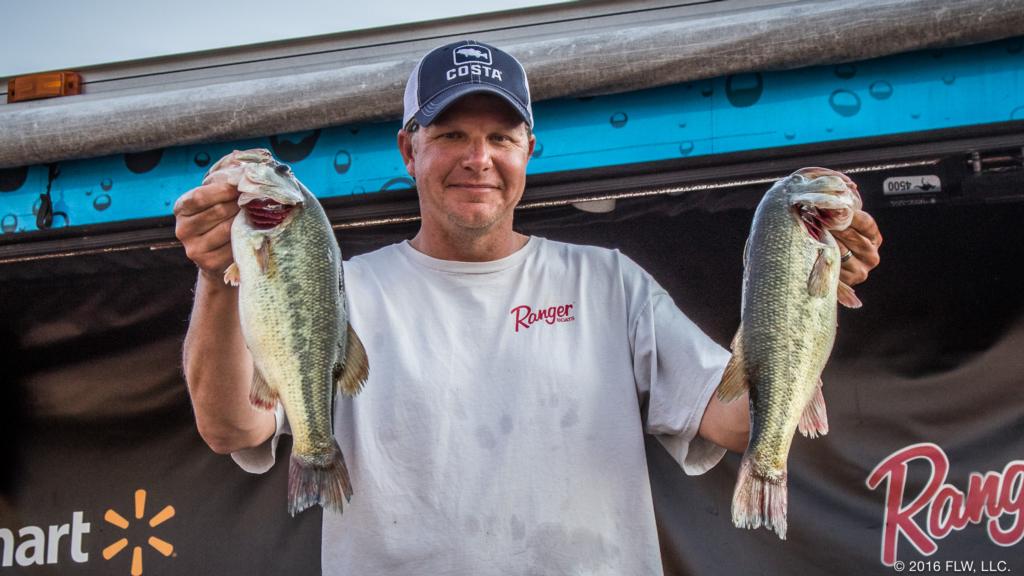 Not to say that bass fishermen are overly superstitious, but most agree that sometimes it’s a good idea not to tempt fate when something is working, particularly a lucky lure.

Chris Aswegan can vouch for the inexplicable power of a special lure. The Tiffin, Iowa, boater won the FLW Bass Fishing League Regional on Kentucky Lake Oct. 13-15, and his primary lure was a Heddon Zara Spook given to him by his 5-year-old son, John, for Father’s Day.

“Normally I always throw a bone-colored Zara Spook,” says Aswegan. “He knows I like to fish a Spook and a frog, but he bought me a shad-colored Zara Spook. When summer rolled around up on the Mississippi, I said, ‘Yeah, I’m tying it on.’ Some people say color doesn’t matter. I don’t know. Maybe it was just good vibes. But I wasn’t about to put it down.” 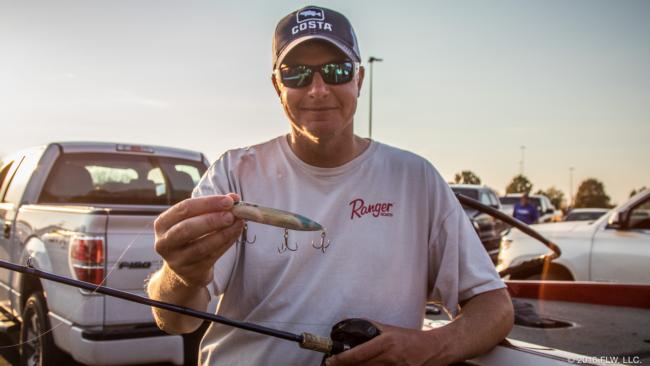 Aswegan used the lucky topwater walker and a buzzbait to tally 47 pounds, 4 ounces in the three-day event and punched his ticket to the 2017 FLW Bass Fishing League All-American on Pickwick Lake. He also earned $20,000 and a new Ranger bass boat.

For Aswegan and the top finishers this week, it was a typical Kentucky Lake bass tournament in the fall. Topwater and shallow reaction baits dominated in a challenging event where mid- to upper teen weights were enough to put anglers in contention on a fishery that regularly churns out much heavier limits earlier in the year.

Likewise, fall on Kentucky Lake is a season of greatly varying weather conditions, and that played out this week. Following several days of summery conditions, Mother Nature swept in with a cold front that dropped the temperature – highs in the mid-50s – for the first two days of competition. On day three, the temperature shot up to 80, the wind blew straight out of the south at 10 to 15 mph and high skies beamed across the region.

The changeup caused Marty Sisk, the boater leader on days one and two, to stumble and bring in just one keeper on the final day. Sisk says he should have known better than to stick with his topwater program amid the change, but Aswegan’s success says otherwise.

Aswegan located a shallow flat on his fourth day of practice that ended up giving up all of his key fish during the three-day event. A subtle drop-off from about 8 inches to 18 inches deep on the flat was the key. It stretched about 100 yards, and there were visible schools of bait along it. Aswegan’s only real adjustment was to pinpoint the exact spot on that break that he needed to cast to get fish to bite.

“The majority of that 100 yards I didn’t catch a fish off of,” says Aswegan, who fished about 50 miles south of the Moors Resort takeoff site. “It was a different stretch each day. Most of my bites each day came from a spot about triple the size of a boat.”

Aswegan says that fishing the spot reminded him of fishing shallow sandbars on the Mississippi back home – a technique he used to make the top 10 in two Great Lakes Division BFLs this season (he finished third in the points in that division this year). The biggest difference is that there’s a lot less current on Kentucky Lake.

In either case, Aswegan suspects that bass don’t hang out in deeper water and rush up to ambush bait. Rather, he believes they hang tight along those shallow depressions and feed when the opportunity presents itself. 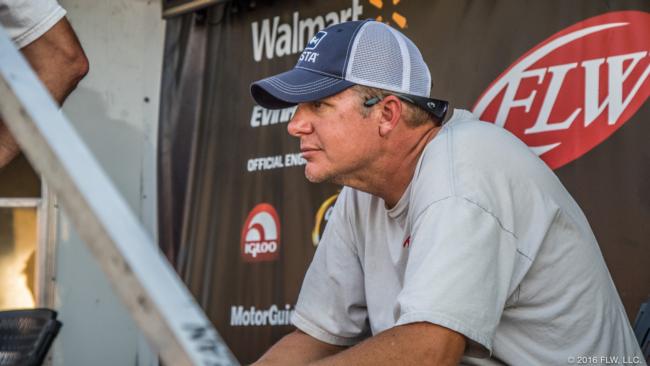 He was able to visually locate the depression during periods of bright sun and calm wind. He stayed on the spot by memory and with his GPS when the wind blew or the sky was overcast, casting around until he pinpointed that day’s sweet spot.

“I didn’t see them working a lot of bait,” Aswegan adds. “Most of the good bites I got were not when they were busting.”

On stage at weigh-in, Aswegan recalled his first trip to Kentucky Lake, and how he was blown away by the vastness of the 160,000-acre reservoir. He says he wondered where to even begin back then.

This time around, he found comfort in a familiar pattern, with confidence techniques and a bait graced with a little bit of luck.

“I know how I like to fish and feel really confident in the fall,” says Aswegan. “I knew I was going to fish topwater.” 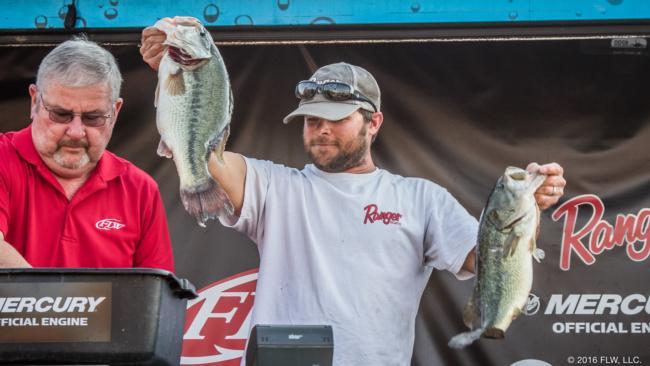 He only got five bites on the final day of competition, but Mike Brueggen didn’t need any more than that. The Wisconsin angler, widely considered to be one of the best BFL competitors in the nation, weighed in 17 pounds, 10 ounces today to finish the tournament with 46-9. One of his five bites today was from a 6-pound, 7-ounce kicker.

“I was throwing topwater and a swim jig,” says Brueggen, who caught his fish down around New Johnsonville, Tenn. “My fish pretty much had dropped out by yesterday. I just had to put the trolling motor down and go fishing today.”

Brueggen fished shallow and dialed in on a specific type of bottom content that produced many, but not all of his fish. He says he fished near the main lake. 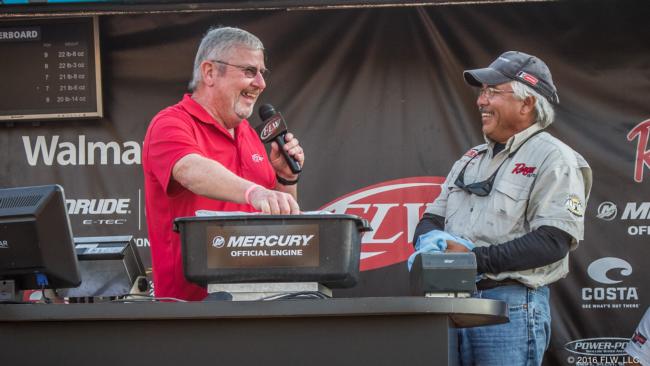 Pickett finishes third, sets himself up as All-American favorite

It’s great when a plan comes together like it did for veteran FLW angler Lloyd Pickett Jr. of Bartlett, Tenn. Pickett fished the Illini Division of the BFL this season for a shot at fishing the Regional on Kentucky Lake, where he has quite a lot of experience. He says the Illini Division presented some of the toughest fishing he’s ever encountered, yet Pickett qualified for the Regional and made it count with a third-place finish this week.

The bigger picture is that Pickett owns a house on Pickwick and knows its waters intimately. He’ll be one of the tournament favorites next season when the All-American is held there.

For the Regional, it was typical Lloyd Pickett Jr. fishing. He’s known for being a Carolina rigger and admits to dragging a rig for three days to total up 45 pounds, 1 ounce.

“I was Carolina rigging drops mainly, anywhere from half a foot to 5 foot,” he says. “But those cold fronts killed me.

“I’ve been out on the river [the main lake],” Pickett continues. “I could get bit in the creeks, but they were mostly fish that were just pushing keepers – 15 or 16 inches long.”

“Today I needed a big bite and never got it,” he adds.

During the first two days, Pickett bounced around and covered quite a few “holes.” Today, he fished only three because of the stiff south wind.

His primary baits were an 8-inch lizard and a Chompers creature bait. 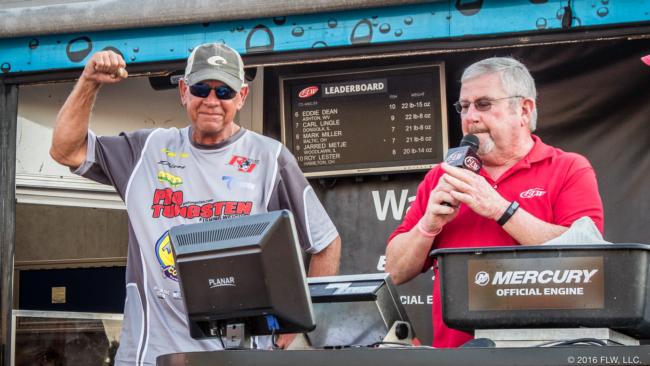 Illinois co-angler Jim Budde earned the win from the back of the boat thanks mostly to a Zara Spook topwater fished around shallow bars.

A key moment for him came on day two when his boater partner Mike Arnold gave Budde the assist he needed to make the cut to the final day.

“We started in [Lake] Barkley and each got a keeper,” Budde recalls. “Then we came back and fished bars. I ended up with five keepers. Then my boater did something I’ve never experienced before. In the last 45 minutes of the day, he put all his rods away. He said, ‘I don’t have a chance to make it, but one more keeper and you can make the final day.’”

Sure enough, Budde caught one more keeper to up his limit to 10-10, then followed with four fish for 12-12 today to move into first place with 30-4 total.

In addition to the Spook, Budde threw a spinnerbait, and his two best fish on the final day came on a buzzbait.

Budde put in extensive practice time leading up to the Regional, but the real key to his strategy was between the ears, not between the banks of Kentucky Lake.

“You just have to remain calm and confident,” he says.

Budde earned a brand-new Ranger boat for his win. It’s good timing. He says his current boat is less than reliable, and the new ride will get him back out on the water.

The Kentucky Lake Regional featured the top boaters from the Buckeye, Great Lakes, Illini and Michigan divisions. The top six boaters and co-anglers qualified to compete in the 2017 FLW Bass Fishing League All-American, which is a televised event with a six-figure payday and a boater berth in the Forrest Wood Cup on the line.