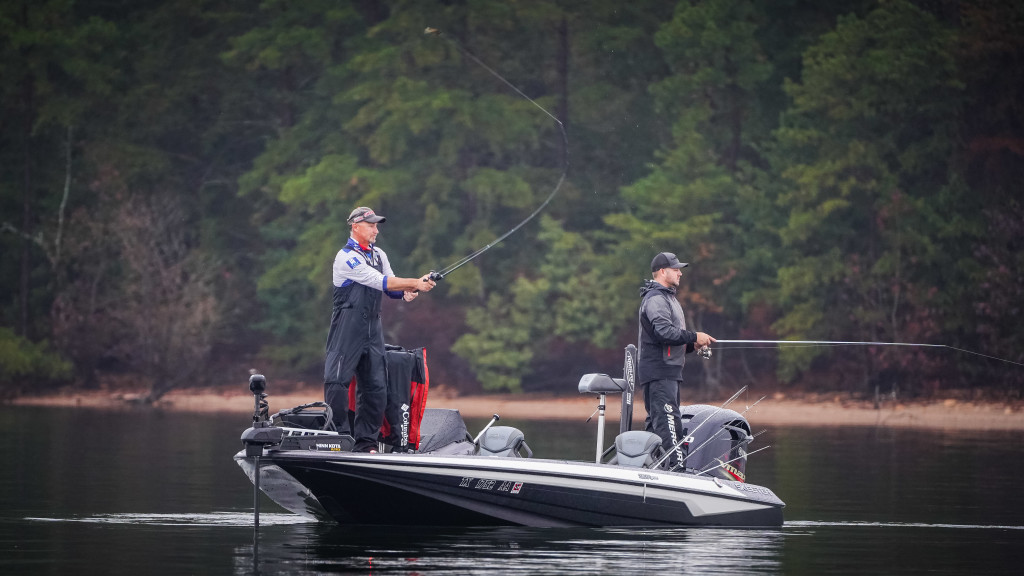 Though there are some possibilities for interesting shallow things to happen on the final day, so far offshore spotted bass have been the name of the game in the Phoenix Bass Fishing League presented by T-H Marine All-American presented by TINCUP. With most of the action going down in the lower end of Lake Hartwell, the top 10 are packed tight, and one kicker bite could go an awful long way at the final weigh-in. 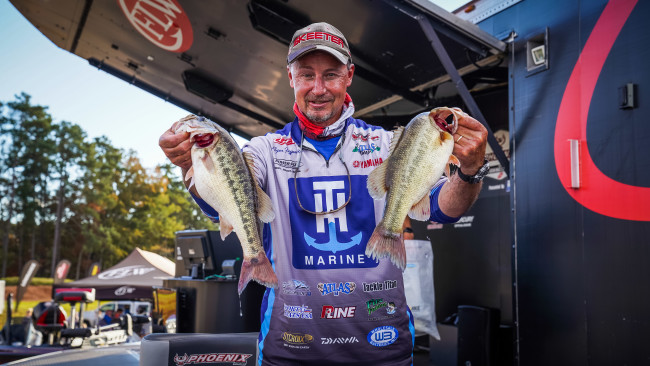 Sacking up 12 pounds, 8 ounces on day two, Roger Fitzpatrick moved up 10 spots to second place. The definition of a veteran stick, Fitzpatrick has a sterling record in the Ozarks, but hasn’t won an All-American yet.

“Today was good, I had a couple Kentuckies (spotted bass) that were a little better than average,” says Fitzpatrick. “I left my deep pattern about 9:30 or 10 o’clock, when that sun started popping out, and just went largemouth fishing. I only had one bite, but he was my best fish.”

Fitzpatrick has a money hole out deep, but he doesn’t seem to want to live and die there.

“I had three Kentuckies that were all three pushing 3-pounds,” says Fitzpatrick. “They were nice, so I was tempted to stay. But, I’m lured to them largemouth, that’s what we do at home. You don’t ever win with Kentuckies at home, and I saw the potential two weeks ago of the largemouth.”

Out deep, Fitzpatrick isn’t playing the schooling game or running a ton of piles, he’s got essentially one hole with a lot of fish.

“It’s a mixture of rock and wood, I think it’s mostly brush, and shad,” says Fitzpatrick. “There’s a lot of bait in there, and it’s pretty deep, probably about 40-foot. It’s one spot, I have one other place, but there has been a local with fold-down seats locked on it each of the first two days.” 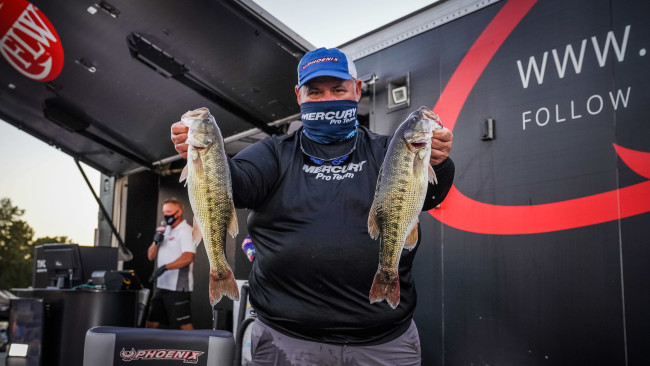 “I can catch them early, and then it’s kind of a struggle after that,” says Dowdy. “I’ve been getting a good start, and that really helps. I caught two keepers on my first stop this morning, so we’ll see what happens tomorrow.”

Dowdy says that his best weather is either sunny and slick or nasty as all get out. On Friday, it looks like he could have the sunny and calm conditions he wants to exploit his brush piles. 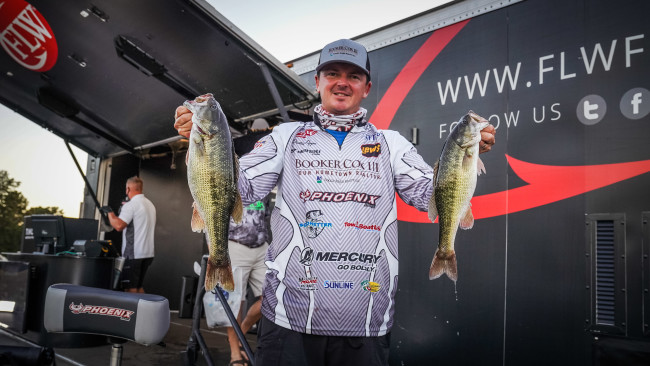 Perhaps working harder than anyone else in the top five, Dustin Lippe lead on day one and is covering water at an extreme rate. Today, he needed all day to put together a good day.

“It took a while, the camera boat was following me today, and we shut down on my first spot, and I don’t think they even got the camera out – my first cast I caught a keeper,” says Lippe. “I thought, ‘Oh man, these guys thing they’re in for a slugfest,’ and I pretty much knew better, and it proved to be the case.”

With just two fish in the box by noon, Lippe got into the game in the afternoon.

“I tried to stay optimistic and I knew the sun would position those fish,” says Lippe. “And it did, I ended up catching one over 3 pounds, and it calmed me down, and ended up filling a limit and then I culled a few times.”

Fishing around brush and cane, Lippe is mostly casting an umbrella rig and a single swimbait to roaming fish. When he’s dropping vertically, he’s caught a few on a spoon and a drop-shot. 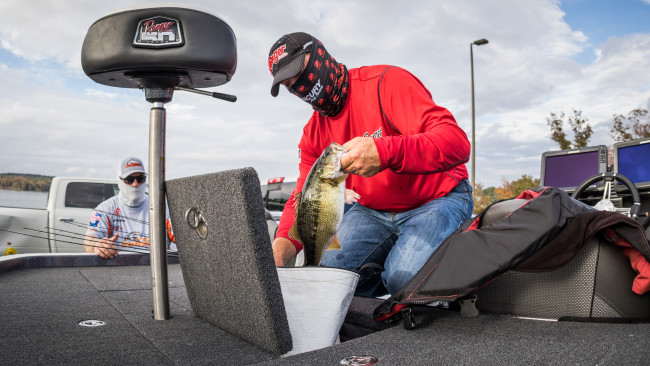 Rustling up a hair over 10 pounds on day two, Chris Macy stuck tight in fifth place.

“It was a grind for me,” says Macy. “Yesterday I wasted a lot of the morning in the fog, and I really thought this morning it would be better. But, it was a grind. The fish were just acting odd, and a lot of the spots that had them, they weren’t there, or if they were, they wouldn’t cooperate. The first spot I pulled up on, man, there were fish everywhere. I don’t know how all them fish could bust around the boat and a guy not catch one.”

Macy ran a very fine line, losing one fish and landing just five keepers on the day. Like a lot of the top pros, he’s banking on offshore spots with a swimbait, drop-shot and football jig. For his part, he’s targeting mostly brush.

“I’m not from here, before I come here, I didn’t even know what a cane pile was,” says Macy. “Back in practice, I grabbed one and pulled it up so I could see what it looked like. But, to me, they’re not in the cane piles, they’re in the brush piles.”