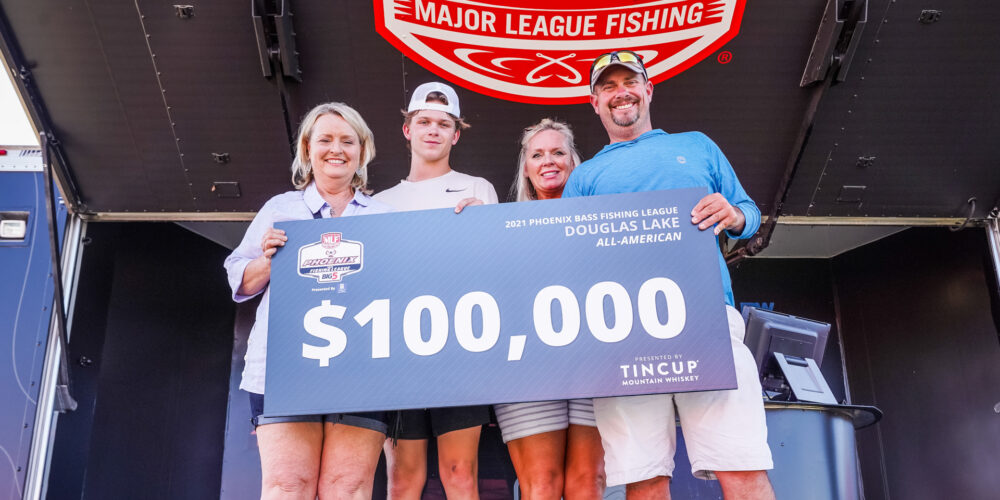 Brant Grimm of Church Hill, Tennessee can add his name to the illustrious list of Phoenix Bass Fishing League Presented by T-H Marine All-American winners, and to an even shorter list of anglers who have won on a lake they’ve fished their whole lives.

Grimm, who calls Douglas Lake and nearby Cherokee Lake his home fisheries, opted to fish the BFL Choo Choo Division in 2020 because he knew Cherokee was hosting the Regional tournament that could punch his ticket to the All-American. It wasn’t until just prior to that Regional that he found out where the 2021 All-American was to be hosted.

“The week of the Regional they announced Douglas,” he says. “I was a basket case. That was awesome. It’s never been on Douglas and to qualify on Cherokee and get to fish Douglas … it’s awesome.

“It all worked out. There was a plan bigger than mine.”

Consider that the understatement of the tournament.

Pre-tournament speculation pointed to the likelihood that the All-American would be won offshore. Most figured you’d need to dedicate some time offshore just to make the Top 10. As it turns out, the vast majority of the Top 10 were up shallow while Grimm was executing his offshore program to perfection. With 14 pounds, 4 ounces on the final day, Grimm totaled 46-9 for the tournament and edged out Leslie Brandenburg by nearly 2 pounds.

“It’s tough – just because they’re down there doesn’t mean you can get them to bite, and I’m sure all these guys looked at enough fish to blow this thing out,” he admits. “These fish don’t bite very well. They’re hard to get to bite. I can’t catch them on but three or four places. I don’t know how to catch them on other places. I haven’t spent enough time dialing in that bite.”

But Grimm did spend enough time figuring out how to get the right fish to bite to earn him the victory – as evidenced by his tournament-best 19-1 stringer to take the lead on Day 2. Still, despite that big bag, he wasn’t feeling too confident by lunchtime on Saturday.

“Today at noon I really didn’t know if I had enough to get it done,” he explains. “It was tough, it really was. I had a really tough day. I’m usually a real talkative person, and at noon today I hadn’t said three words.”

Things turned around fairly quickly for Grimm, though, who primarily focused his time fishing upriver targeting drop-offs near channel swings. There, with his boat often sitting in 40 feet of water while he cast his shad-colored Strike King 6XD to 15 or so feet, Grimm found the big bites he desperately needed – and the bites he just wasn’t able to get fishing shallow in pre-practice and the official practice period.

“I love fishing shallow,” he admits. “I consider myself a shallow-water angler. I fished shallow here for two weeks during the BFL and the first of the month and I never caught anything over 3 pounds, so I didn’t feel like I could win on the bank. I committed my time offshore and it worked out.”

Winning the All-American still hasn’t sunk in, he says (“It’ll be days before I even realize I won this thing.”), but the relief he’s probably feeling should help with that. Grimm says he hasn’t slept well in months because of the anxiety and anticipation of having the opportunity to fish for $100,000 on a lake he knows and loves.

As for when he’ll finally sleep soundly?