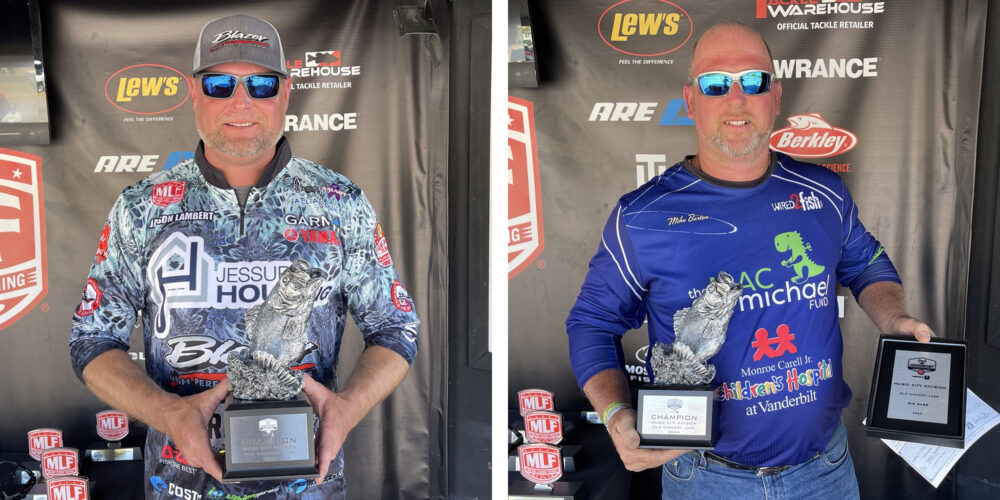 “Old Hickory has always been a notoriously tough lake to fish for me,” said Lambert, who earned his seventh career win in MLF competition. “To go up there and fish against the local guys and squeak one out – it’s harder to win a BFL event than a Toyota Series or a Bass Pro Tour event because you’re fishing against every local hammer on the lake.”

Lambert said he focused on outside grass lines – milfoil and hydrilla in particular – on the bottom third of Old Hickory and caught every fish he weighed in on a white ChatterBait with a Green Shad-colored Castaic Baits Jerky J trailer.

“On Saturday I had seven keeper bites and lost two of them,” Lambert said. “Sunday, I only had five keeper bites all day. But my first fish Sunday morning was a 3-pounder, which is huge there.”

Dylan Wright of Murfreesboro, Tennessee, caught a bass weighing 5 pounds, 2 ounces – the heaviest in the Boater Division – to earn the Berkley Big Bass Boater award of $705.

Barton also caught the largest bass in the Strike King Co-angler Division, a fish weighing in at 4 pounds, 2 ounces. The catch earned him the Berkley Big Bass Co-angler award of $352.