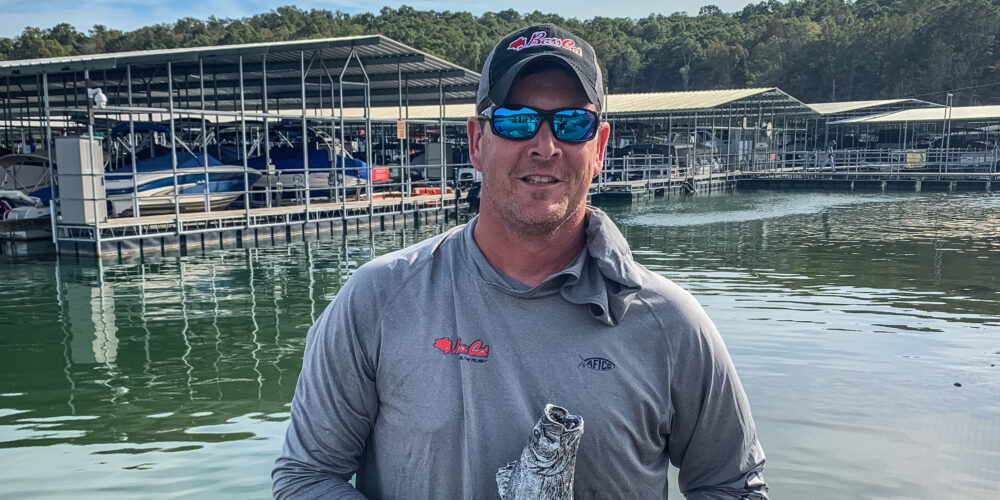 Brad Kell of Benton, Kentucky, has plenty of accolades on his home waters of Kentucky Lake, but this past weekend he took his career to the next level. Rolling five hours down the road for the Phoenix Bass Fishing League Presented by T-H Marine Regional on Norfork Lake – a place he’s only fished a handful of times in his life – Kell put together a solid three days of fishing to tally 34 pounds, 15 ounces and claim the Regional win. For the win, Kell earned a Phoenix 819 Pro bass boat with a 200-horsepower Mercury outboard, plus an extra $11,000.

While Kell is a far cry from a Norfork local, he’s certainly no stranger to the area.

“I’ve been to the area quite a few times as a kid,” Kell said. “But I’ve always been down there trout fishing on the Norfork and White rivers. I’ve been down to [Norfork] for half days of bass fishing in some Bass Cat tournaments, but this was the first week I’ve spent full days bass fishing on it.”

The slight bit of experience Kell had from Norfork has been later in the fall, so when he started practice he knew a topwater might be the way to go.

“I caught ‘em pretty good on a topwater my first day of practice and covered my hooks up after I sent my wife some pictures of like 13 pounds to tell her it was going pretty good,” Kell said. “It rained the next day and I thought I’d kill ‘em again on a topwater and it didn’t happen. I knew then that it wasn’t going to hold up.

“So I started looking for brush piles and in two hours I found two of the biggest schools of bass I’ve ever found in my life, and I have found some on Kentucky Lake that had 400 or 500 in it. These schools were that size, but just smaller than a normal Kentucky Lake bass. There were some brush piles involved where they set up, but otherwise, it was just a good old drop off.”

After discovering two mega schools, Kell was uneasy about what tournament day would bring, as most any tournament angler would be. When things got rolling on Day 1, it didn’t take long for Kell to start putting on a show.

“The first day I was boat 99 and pulled in a nervous wreck,” Kell said. “I was thinking someone else found those schools, but I also wasn’t sure anyone was doing what I was doing. Well, I pull in there and the guy that finished fourth, Brien Vaughn, was there too. I caught probably 100 in front of him, which I didn’t really want to do, but I’d rather I catch them than he did. Most of them were just keepers, plus I still had my other school I could go to.”

“I went to my second area on Day 2 and they were there, but I didn’t catch them as good,” Kell said. “I felt good though because I had 12 pounds with the fog delay and the shallow water guys just didn’t catch them.”

Taking the lead after Day 2, Kell went back to his second school on the final day, but things weren’t going as smoothly.

“I was stressing on the final day because I culled the wrong fish twice,” he said. “I was catching them so fast and they all looked identical, but I was culling the wrong fish. Around noon I started thinking I should have more weighed than I did and when I looked in the livewell I still had one that weighed 1-7.

“I got my plug hung in a brushpile and I was shaking it when I got right on top of it and a 2 ½- or 2 ¾-pounder ate it and I flipped it in the boat and that’s when I knew some things you can’t stop from happening.”

To target his schools of fish, which were in anywhere from 13 to 22 feet of water, a Strike King 6XD and 10XD did the heavy lifting for Kell throughout the tournament. He also caught several fish on a Mark Kirby spinnerbait and a ¾-ounce All Terrain Tackle jig with a Strike King Rage Craw trailer, with his two biggest fish coming on a 5-inch Ignite Swimbait.

With this being just his second season fishing the LBL Division, Kell has made the Regionals two years running. Though he’s late to the party, he’s happy to finally have accomplished one of his fishing goals.

“This feels great,” Kell said of his win. “When the fishing went downhill on Kentucky Lake I knew this would be the time to go try and make the All-American. I’m 43 and I started fishing [BFLs] when I was 41, so this was the time to do it. My kids are old enough, my wife is super supportive, so I started fishing [with MLF].

“I was worried I wouldn’t even make the Regional this year because I didn’t fish the Super Tournament because I fished a tournament with my buddy on Old Hickory, and I knew I couldn’t fish the Wild Card because it’s too late in the year and I’d be deer hunting. But everything worked out perfectly. It just fell into place and I think I might fish the Toyota Series next year and see how that goes.”

The top six boaters and Strike King Co-Anglers qualified for the 2022 All-American.