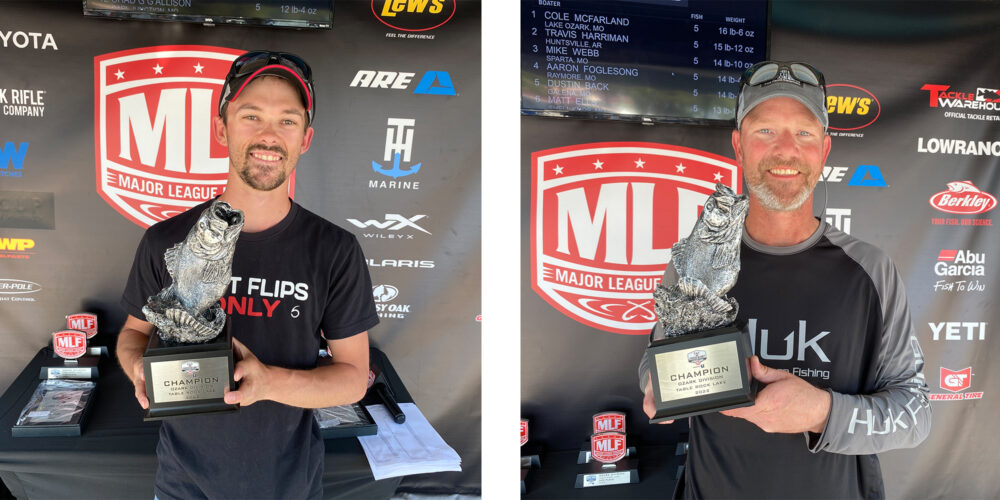 “We had a pretty nasty fog delay, and I was the last boat out,” McFarland said. “I started out flipping bushes, and it didn’t pan out. I practiced last Sunday and had them located pretty good up shallow, but the lake was up 10 feet higher (during the tournament).”

McFarland said he switched his approach to looking for smallmouth by fishing a flat and caught a couple of bass, then targeted docks with a 5/16-ounce Crock-O-Gator shaky-head rig. He said he stayed close to the Kimberling City area for the duration of the tournament.

“The shaky-head rig was the bulk of it, honestly,” McFarland said. “I caught my largest and one of my better ones that way, then caught a 3-pounder flipping a bush later in the day. Then, with about 10 minutes to go before weigh-in, I culled out my smallest smallmouth with a 2½-pounder dragging the shaky head on a point.”

McFarland said he culled twice during the day and his weigh bag consisted of four largemouth and one big smallmouth.

“This is just surreal,” McFarland said. “This feeling hasn’t worn off yet. It’s just awesome to win such a well-put-together event.”

McFarland had a largemouth that weighed 4 pounds, 14 ounces that was the heaviest of the event in the Boater Division and earned the day’s Berkley Big Bass Boater award of $1,000.

Hunter Hansen of Overland Park, Kansas, caught the largest bass in the co-angler Division, a fish weighing in at 6 pounds, 13 ounces. The catch earned him the day’s Berkley Big Bass co-angler award of $500.