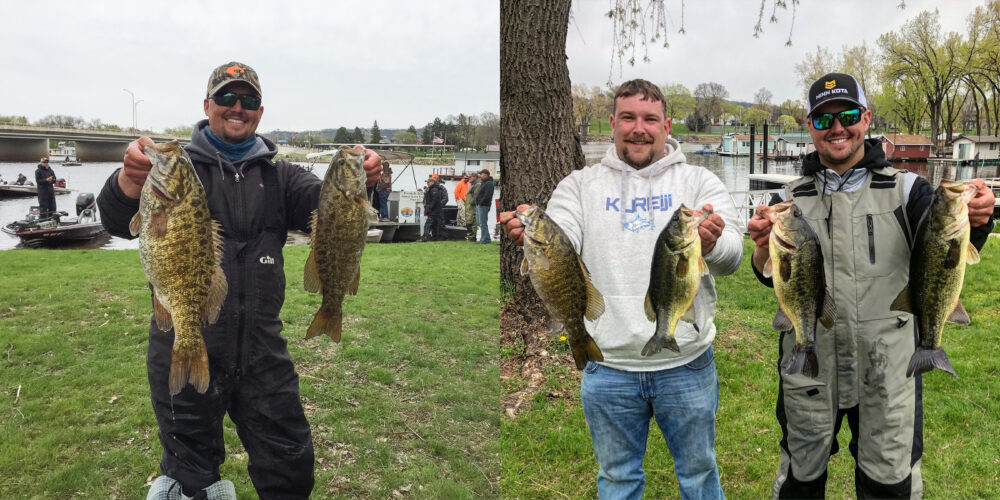 LA CROSSE, Wis. – As per usual, the Phoenix Bass Fishing League Presented by T-H Marine Great Lakes Division starts the season on the Mississippi River, taking off out of La Crosse, Wis., and having the run of the river from there. A historic fishery, the Big Muddy is always a good kickoff to the season, and April and May usually offer the biggest weights of the year.

The Mississippi River is the second-longest river in the US, and certainly first when it comes to fame. While bass can be found throughout the 2,300 miles the Mighty Miss spans, the tournament waters for this competition consist of Pools 7, 8 and 9, with takeoff occurring in Pool 8. These three impoundments of the second-largest drainage system in North America provide an ample amount and variety of cover for bass to reside. Vast swaths of vegetation, wing dams, rock jetties, backwater pools and shallow laydowns can be found throughout the river.

Mississippi River ace Cade Laufenberg figures the fishing should be good for this event, assuming spring actually arrives as the calendar indicates. Given decent weather, a full-swing prespawn bite can be a thing of beauty on the Mighty Miss.

“We should have water temperatures in the mid-50s, everything will be complete prespawn,” Laufenberg said. “The weather of that week is gonna dictate whether it is a smallmouth or largemouth dominated event. If we get a big warming trend, you might see five fat largemouth come to the scales caught in shallow grass. If things stay stable and normal, it could be a big-time smallmouth event.”

With some ice lingering on the river at the beginning of April, Laufenberg figures the weather ahead of the event will have a lot to do with how the fish set up.

“We need a big warming trend for like a week to get things started,” Laufenberg said. “What usually will happen, is we get that big warming trend and a bunch of bass will move shallow to sun themselves and wake up from winter. Then when we get a cold front after that, it kinda seems to trigger the good prespawn bite. I’m kind of looking for that to happen for this tournament. The fish are gonna come shallow, everybody goes and just melees them with a spinnerbait, then you get a cold front and it puts everything back. That’s when they group up on the points and the ditches and things like that, that’s when you can get the really good prespawn schools of fish. If it gets warm and just stays warm, they won’t be very grouped up.”

Even if the weather is just warm the rest of the way, there’s still a chance for some epic times. Not really a high-weight fishery usually, the Mississippi can show out in the spring.

“This time of year the fish are really fat, not only do they have their winter fat, but they’re also full of eggs,” Laufenberg said. “If you land on that school of big prespawn females, this is the time to catch your personal best on the Mississippi River. All the biggest bags I’ve ever weighed-in in a tournament have come in the early spring like this. You don’t get to see a 20+ pound bag very often in La Crosse, but when it does happen, it’s very often in these April and May tournaments.”

On the largemouth side, you can expect a lot of the action to go down in grass on near grass, with fish headed to low-current areas to spawn. Smallmouth, on the other hand, are likely to be ganged up in the main river.

“For largemouth, you can catch them on a jig, ChatterBait, lipless crankbait and a spinnerbait power fishing shallow,” Laufenberg said. “That’s dictated by water temperature, when the water is 55, that’s the magical zone for those power fishing baits.”

If he’s swinging for brown, Laufenberg still likes to keep power baits in hand, with perhaps the addition of a Carolina rig if they’re a bit finicky.

“For smallmouth, if you’re going to catch that megabag of smallmouth, it’s also power fishing,” Laufenberg said. “Usually like a swimbait, jerkbait, lipless crankbait, those are the key baits for the smallmouth. You find them grouped up in the current, and you’ve just got to pick the right bait for the conditions.”