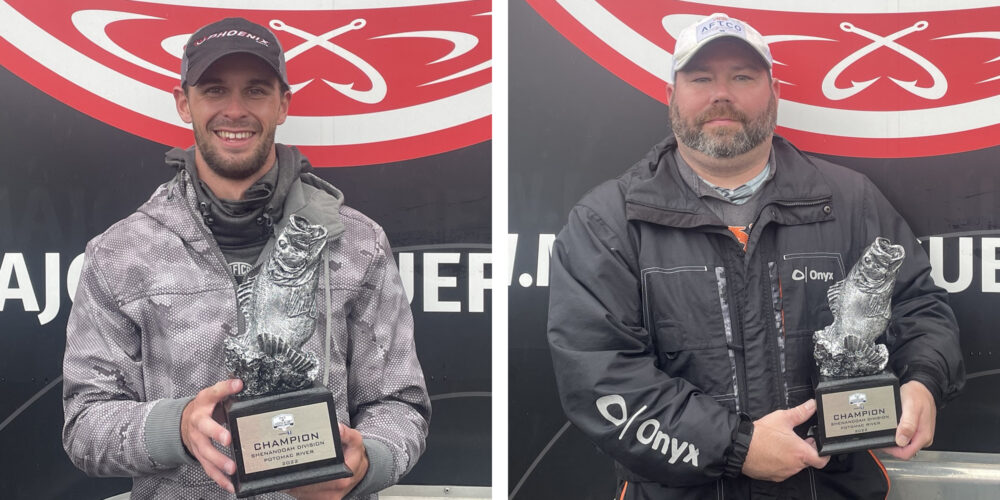 MARBURY, Md. – Boater Joshua Greenberg of Montpelier, Virginia, caught 10 bass weighing 29 pounds, 2 ounces, to win the two-day Phoenix Bass Fishing League Presented by T-H Marine on the Potomac River in Marbury, Maryland. The tournament, hosted by the Charles County Board of Commissioners, was the fifth and final regular-season event for the Phoenix Bass Fishing League Shenandoah Division. Greenberg earned $5,137 for his victory.

Greenberg said he began the tournament by relying on past experience as a co-angler and focused on a ditch in the Mattawoman Creek area to catch bass. Greenberg said he threw a topwater frog on the matted grass there.

“I told my co-angler, ‘We going to hunker down here, and if we start catching them here, we’re going to stay here and pick it apart,’” Greenberg said. “We got lucky with some fortunate bites, but missed a lot of fish.

“We missed a lot of fish because they would either miss the frog or blow up behind it,” Greenberg said. “I ended up having over 30 blowups on a frog and only caught one of them. It was tough. We tried following it up with a small finesse bait and caught two keepers doing that. I tried flipping as well, but didn’t have any luck doing that.”

Greenberg said he returned to his Day 1 spot on Sunday, but the water had dropped over night, so he relocated to another area nearby. On his first cast there, he landed a 4-pound bass and his luck seemed to change.

“My co-angler had his limit in about 10 minutes, and I was wondering what I was doing wrong,” Greenberg said. “Then I caught two fish right away, and before you know it, in 15 minutes we both had our limit. That’s river fishing. One minute it’s dead, the next minute it’s game on, and everybody is having a good time.

“This win is great. I helped start the College Fishing team at Radford University and fell in love with the sport,” said Greenberg, who made appearances at the College Fishing National Championships in 2019 and 2020. “I fished BFL events as a co-angler, and I fished this year as a boater in the BFLs and put a win in my goals for this year; I’m just blessed.

“My co-angler on Sunday went to Radford as well, and when we both got a limit, we high-fived and he screamed, ‘The Radford boys have a limit.’ That was just awesome.”

Christopher Milton of Prince George, Virginia, caught a bass weighing 5 pounds, 2 ounces – the heaviest of the event in the Boater Division – to earn the Berkley Big Bass Boater award of $645.

Robert Wedding of Welcome, Maryland, caught the largest bass in the Strike King Co-angler Division, a fish weighing in at 5 pounds, 4 ounces. The catch earned him the Berkley Big Bass Co-angler award of $322.