Upshaw and Watkins tops on Somerville 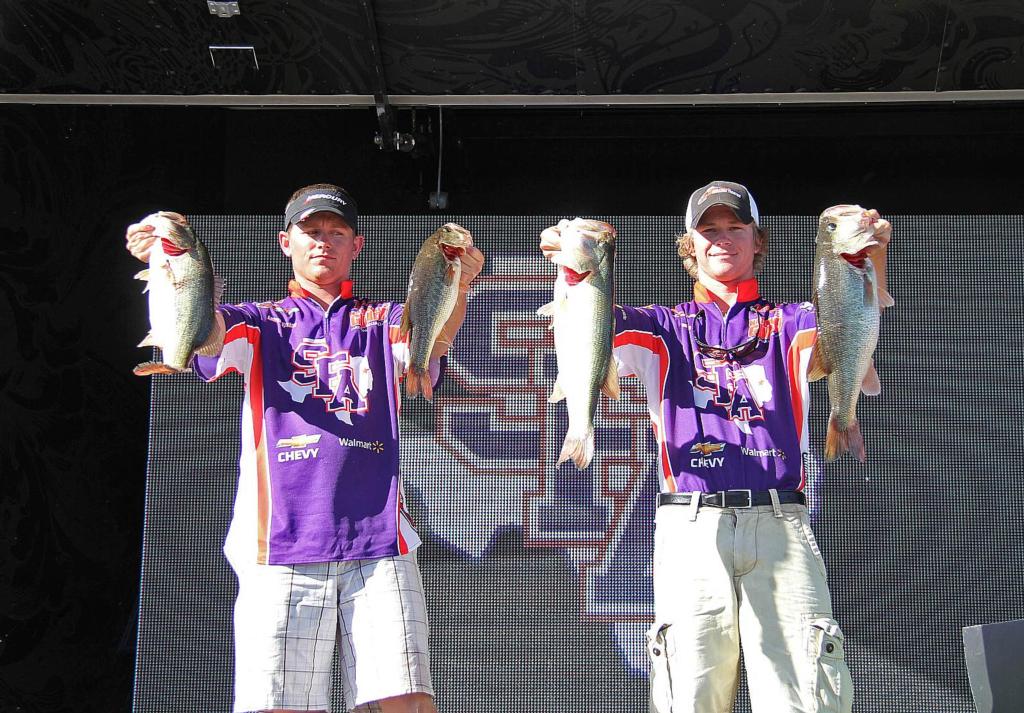 COLLEGE STATION, Texas – It must have looked like a limbo contest to Andrew Upshaw and Ryan Watkins. The Stephen F. Austin partners opened the show by setting a high bar and then watched each competing team cross the stage under that mark on day one of the National Guard FLW College Fishing Series Texas Regional Championship, presented by Mercury.

One of 11 teams to pluck a 5-fish limit from Lake Somerville, Upshaw and Watkins were the only duo to break the 20-pound mark. Their 21-pound, 5-ounce bag was anchored by Watkins’ 6-plus pounder. Keeping it real, Watkins pointed out that theirs was no easy course, thanks to today’s shifting weather.

“Just because we got a good bag doesn’t mean we had an easy day by any means,” he said. “That 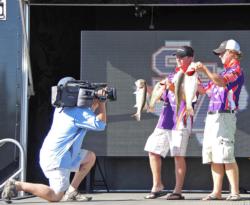 front passed through and it got tough, so we had to change up.”

The leaders held their cards low on specific baits and tactics, but Watkins said that the conditions required them to trash the initial game plan and shift gears.

“All week long we’ve been fishing in stable conditions but they changed today,” he said. “We got high pressure, the water color changed and the wind picked up a little bit. We just adapted to the conditions, but that’s the way tournaments are won. It’s about the decisions on the water, not off the water.”

The SFA anglers fished all over the lake today and hit about eight main areas. Upshaw said that faster presentations were most productive. 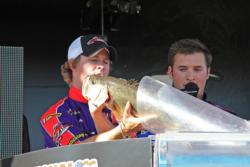 teams and we’re sticking with it all day,” Upshaw said. “We’re not stopping on one specific spot. We have eight 300-yard areas. We covered a whole lot of water today and I think that played to our advantage.

“We stayed around wood and rock mainly. We didn’t really target one specific thing. With a lake this small, you just hit everything you see and anything you see on your depth finder. Hard bottom is always good – something different is always going to have fish on it.”

With Lake Somerville standing about 10 feet below normal pool, the resident bass have been confined to a much smaller range. It’s not surprising then, that competitors saw a lot of each other today.

“I’m very thankful for (our day-one weight), but three of the top-five teams are fishing within 75 yards of one another,” Watkins said. “It’s already a small lake and it fishes small. I’m glad we got what we got, but we have to go back and do it tomorrow because I know these guys are going (for big weights).”

Texas A&M’s Kyle Bates and Cody Collins sit in second place with a limit worth 19 pounds. They, too, had a kicker – Bates’ 9-pound, 12-ounce toad, that stood as the day’s biggest bass.

“That was very early in the morning,” Bates recalled. “It was our second spot – our second fish of the day. That was definitely the way to get some momentum going. It was amazing. It was a once-in-a-lifetime opportunity.”

Bates said that his big fish, like most of his team’s other bass, bit a reaction bait. The scenario, he 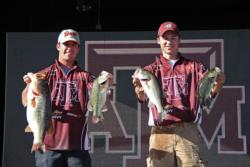 said, was rather surprising.

“It was fairly shallow water – a non-typical spot for a big fish to be,” he said. “I think it just pulled up at the right time and I had my bait in front of it. The lake is so low right now and usually these big fish like to have some deep water pretty close. There was some deep water, but it was pretty distant. There was quite a bit of shad on the bank so I figured it was in there feeding.”

The Aggies generally got off to a good start, but their second-place performance didn’t crystallize until late in the day. Collins explained: “We caught most of our fish early this morning and then we struggled the rest of the day to get some more bites. We caught some little fish, but we actually caught our fifth keeper that we brought to the scales on the last cast of the day. That was a pretty exciting way to end the day.

“We started out with reaction baits, but then we had to slow down and pick apart our spots once the wind picked up. We covered a lot of water today – we saw both ends of the lake, both sides, deep, shallow – we fished it all.” 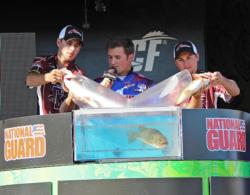 Giving the Aggies a double dose of top-five representation, Andrew Shafer and Weston Brown trail their Texas A&M teammates by 7 ounces with a third-place weight of 18-9. Shafer said their day played out fairly close to the game plan they had formulated. However, they never dialed in a specific pattern or area.

“There weren’t really any keys – maybe the color of bait we were using and maybe how we were presenting it to them,” he said. “We didn’t get a kicker today, but we caught a lot of fish, so other than that it was a good day for us.”

Brown said that he and Shafer caught their fish on a mix of reaction baits and soft plastics.

“Once we figured out what the fish wanted, we adjusted accordingly.”

Shafer said he’s thrilled to see two of the hometown teams in the top five, but he’d like to see the order change on day two.

“Hopefully, we’ll get a big kicker fish tomorrow and pull out of this.” 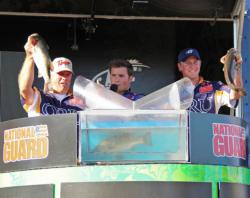 Vankeulen said that after finding productive areas about three weeks before the tournament, they laid off their good stuff during the tournament’s official practice so they could fish it fresh today.

“We stuck really close to our game plan and it’s really nice that it worked out for us,” Vankeulen said.

They too caught most of their fish on reaction baits and Johnson said that fishing the south side of coves proved most productive. The anglers targeted points and brush at a variety of depths. 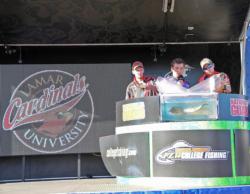 Matt Morrison and Danny Iles of Lamar University claimed the fifth-place spot with a limit catch of 15-14. Iles said his team carried a diverse set of options into the day and ended up leveraging one of them for their heaviest fish.

“We had about four different patterns,” he explained. “One of them is good for (big fish) but it didn’t work today. With two other patterns, you catch a bunch of fish all day long but you have to catch 12-inchers to get a 3-pounder. The best thing that we found was also found by (two other top-five teams). We’re all fishing the same shallow stuff.”

Iles said that, despite their success fishing plastics slowly in practice, he and Morrison could only get bit by fishing faster-moving reaction baits today.

Rounding out the top-10 leaders at the Texas College Regional Championship: