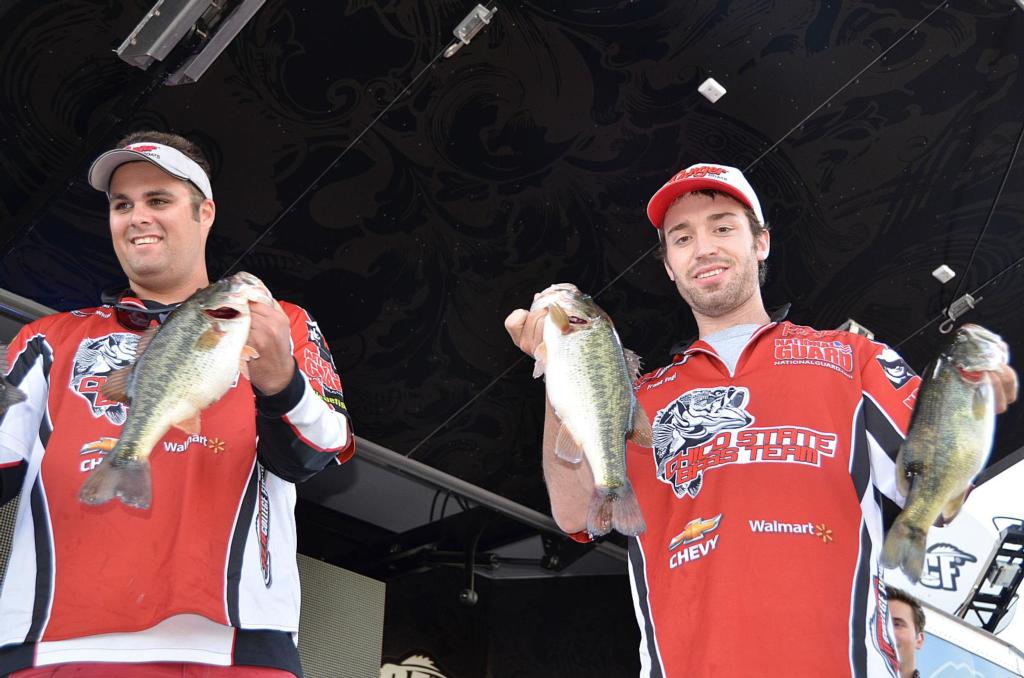 TEMPE, Ariz. – In the end, Chico State saved the best for last. Although teammates Thomas White and Frank Vogt managed to check in on time after pulling their boat out of Saguaro Lake, the Chico State team managed to get lost for over an hour on their way back to the weigh-in stage at Arizona State University. However, when the finally arrived, the team realized that their harrowing day would end on a stellar note as their total catch of 10 pounds, 5 ounces pushed them into the overall lead on the first day of FLW College Fishing Western Regional Championship competition.

And they couldn’t have been happier – or more drained.

“What a day,” said White. “It feel great, but it was really tough out there. Practice wasn’t very good for us and we’re the last boat to leave. So, overall, it’s nice to finish the day in first.”

Amazingly enough, the team actually came back to the marina about 45 minutes early due to concerns over the health of one of their fish.

“It was one of the toughest decisions I’ve ever had to make on the water in my career,” said White. “We had one fish that wasn’t doing well and we tried to baby it all day. I actually named it `Princess.’ But we didn’t want an (8-ounce penalty) for bringing back a dead fish. So even though we only had four in the boat, we gambled that it was better to come back early without a five-fish stringer than risk the penalty.”

“The key was fishing very slowly with finesse-style presentations,” said White. “Where we are fishing you’re not going to get a lot of bites. But if you do get one, you’re not going to catch a dink. The type of fishing we’re going is all about using your graphs and GPS. If you pull up on a bait ball, you need to throw your (drop-shot) down there and just be patient.”

However, like the majority of teams in today’s competition, Chico State said that the fishing was far from easy.

“Our morning bite produced next to nothing,” said Vogt. “Tom caught one fish at about 10 a.m. but we didn’t have much success until we started to notice some current around noon. When we saw that, we headed back to our original spot and that’s when I caught that 3-pounder. Tom caught two more fish after moving around a bit. But overall, it was a really difficult day for us.”

It was not only a difficult day for Chico State, but for the field at large as well. By the end of Thursday’s weigh-in, only one team – Sacramento State – had produced a five-fish limit. Six teams didn’t manage a keeper fish at all. Only three teams brought three or more fish to the scales and only two teams produced weights in excess of 6 pounds.

But in the end, it was Chico State that found itself atop the leaderboard.

“It’s great to be in first place today but it doesn’t really mean anything if you don’t produced on day two,” said White. “Tomorrow, we need to go out there and fish hard and fish smart.” 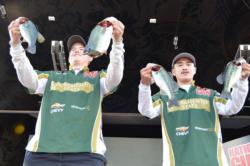 After winning the 2010 FLW College Fishing Western Regional, the Sacramento State team is once again within striking distance of another title. Using a total catch of 8 pounds, 8 ounces, teammates Robert Matsuura and Thomas Kanemoto snared second place overall and remained the only team of the tournament to land a five-fish stringer.

“I can’t believe that we got the only limit today – that’s just crazy,” said Kanemoto. “I feel incredibly blessed right now to be in second place, especially given the fact that we’ve never fished this lake before.”

Like most of the field, Sacramento State said the fishing was extraordinarily difficult today.

“Right now it’s a really tough bite out there,” said Kanemoto. “We pretty much used finesse techniques all day. We started out slowly and didn’t start at the spot where we caught most of our fish today, but I think we’ll go there first thing tomorrow.”

Compounding the difficulties for Sacramento State is the fact that, at least so far, Matsuura hasn’t been able to assist his teammate as much as he’d like.

“This is one of the toughest tournaments I’ve ever had,” said Matsuura, who was the hero of last year’s regional. “I honestly haven’t been able to get a bite all tournament.”

However, if Matsuura begins to produce, Sacramento State could easily find itself in position to grab back-to-back titles. 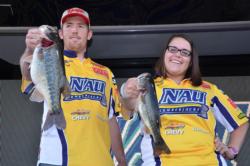 Coming into the tournament, the Northern Arizona University team of Brent Perkins and Nicole Albright had the distinction of having the only team to feature a lady angler in the regional championship. After today, however, they have the distinction of being one of the true top contenders in the field. Using a total catch of 6 pounds, Northern Arizona solidified itself in third place overall and put itself in position to make a run at the title as well as one of the five outstanding berths in the 2012 national championship

“Brent caught his big fish early but we had a really rough time after that,” said Albright. “But overall it’s going pretty well, all things considered.”

Not only did the team finish the day in third, but they also managed to record the largest fish of the tournament to date – a 4-pound, 11-ounce largemouth.

“This is the toughest I’ve ever seen this lake,” said Perkins, who targeted bass using a drop-shot for most of the afternoon. “Actually, coming back to weigh-in, I didn’t think we did that good at all. But third place, I’ll take it at this point.” 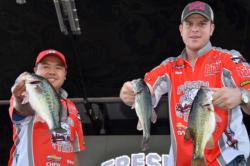 The Fresno State team of Kong Moua and Christopher Delgado parlayed a 4-pound, 11-ounce catch into a fourth-place finish overall.

“I think we can make a real run at (the title),” said Delgado. “We had some boat issues early but tomorrow, I think we’re going to come back big. We got on a good pattern later in the day and that should help us as well.”

Moua, who owns the record for catching the largest bass in the history of FLW College Fishing at 10 pounds, 9 ounces, acknowledged that he loves the competition more than anything else.

“We don’t do this for the money,” said Moua. “We do it for bragging rights.”

As of right now, the Fresno State team has plenty to brag about. 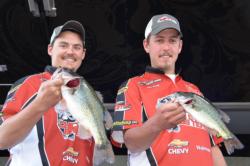 With four Chico State teams qualifying for the western regional, the school was bound to make some noise when all was said and done. And today, they started early – placing two teams in the top five with only one day of competition remaining before the final top-five cut.

“It’s really nice having four teams in the regional championship because odds are we’ll send somebody to the (national) championship,” said Bo Harkins, who along with partner Anthony Dayton produced a catch of 4 pounds, 1 ounce to grab fifth place overall.

“I think we can do it again tomorrow,” said Dayton. “I think we figured out some new strategies at the end of the day so I’m hopeful we can catch a good stringer tomorrow.” 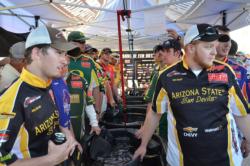