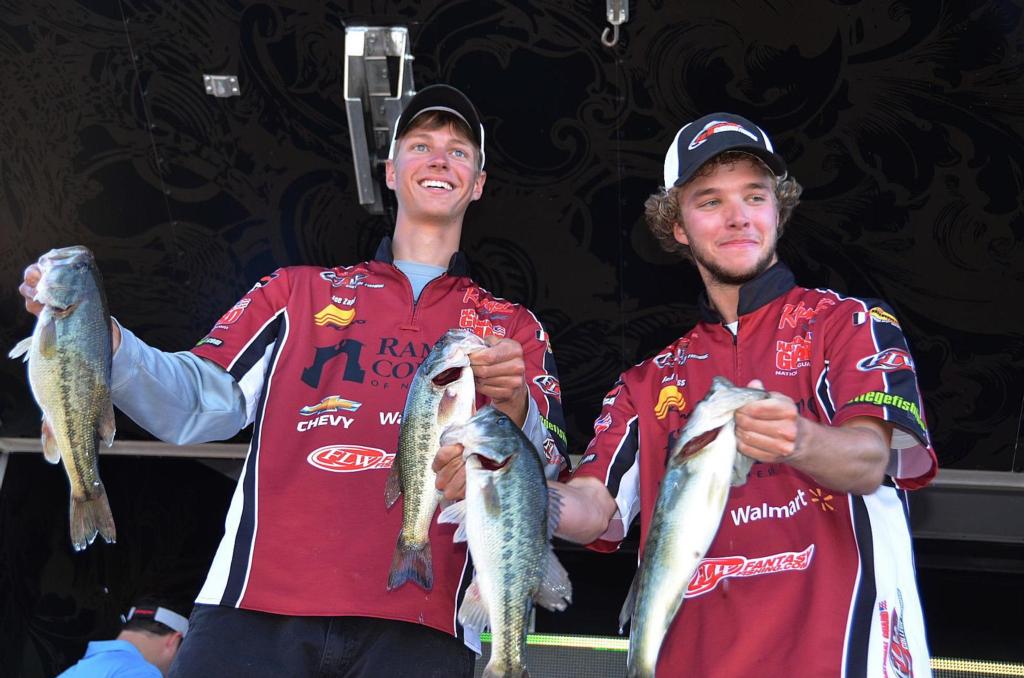 MARTINSVILLE, Va. – The Ramapo College team of Jeffrey Voss of Secaucus, N.J., and Joseph Zapf of Whippany, N.J., could be excused for feeling a bit of deja vu. After the second round of northern conference championship competition one year ago, Voss and Zapf were in first place heading into the finals. However, after Friday’s competition on Philpott Lake, they found themselves in the exact same spot – squarely in first place with only one day of competition remaining.

The Ramapo College team ultimately held on to win the conference championship in 2011. And, not surprisingly, they plan on doing their best on Saturday to net the same result.

“It’s definitely a great feeling to come back and do well again in the conference championship,” said Voss. “We put in a lot of practice and we have a lot of confidence right now. And it’s really paying off. Tomorrow, we’re just going to go out there, fish slowly, hopefully get a couple of good bites and go from there.”

Boasting a two-day tournament leading limit of 18 pounds, 8 ounces, Ramapo College is now in perfect position to defend its title. But it won’t be easy as the top-three teams are all within 3 pounds of each other.

“It’s obviously a really tough lake,” said Zapf. “We’re fishing really deep, probably a bit deeper than most teams. We fished two spots total today and we’ve been targeting areas anywhere from 20 to 60 feet, although our main range is probably more around the 35- to 50-foot range. The lake is loaded with brush and wood and we’re looking for the sweet spots on those areas (that offer that kind of cover).”

The team said that it is primarily relying on a drop-shot while continually searching for limit fish on their graphs.

“Looking at our electronics has been really important this week,” said Zapf. “You have to have a lot of patience.”

Overall, the team sounded confident it could not only duplicate today’s effort, but walk away with the title for a second year in a row.

“Today we had our limit in 30 minutes,” said Voss. “We saved a lot of our spots for Saturday’s finals as well. So we’re feeling pretty good right now.”

But no matter what happens in Saturday’s final day of competition on Philpott Lake, the duo knows that one of their most important goals has already been accomplished.

“We qualified for the (2013) national championship,” said Voss. “And it doesn’t get better than that.” 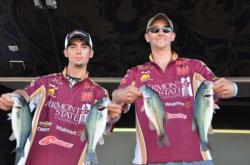 Although the Fairmont State team of Ryan Radcliff of Parkersburg, W. Va., and Wil Dieffenbauch of Hundred, W. Va., dropped from first place to second after today’s competition, the team’s total catch of 17 pounds, 8 ounces only left them 1 pound behind the leaders heading into the finals. But ironically enough, like the Ramapo team, Fairmont State University found itself in the exact same position on day two as in 2011 – in second place with one crucial day of fishing remaining.

“It’s the exact same deal as last year,” said Dieffenbauch, who is personally making his fourth-straight conference championship appearance. “(Ramapo) was in first and we were in second heading into the last day last year. They wound up winning the title, but hopefully we can turn things around and beat them this year. We really want to beat these guys.”

While the fishing was difficult, Fairmont State managed to record two five-fish stringers in a row – one of only five teams to accomplish that feat.

“It took a little while longer to get our limit today but we’ll take it,” said Dieffenbauch. “We’re been concentrating on areas where the shad are moving in. There are certain points that look alike that we’re fishing, but you have to find the key spots on those points. We’ve been using drop-shots and swimbaits in anywhere from 30 to 50 feet of water.”

With only one day of competition remaining, the team acknowledged that it feels good about its chances in the finals.

“I think we’re feeling pretty good,” said Dieffenbauch. “We’re not too far out of the lead and we can definitely bring in a big bag tomorrow. We didn’t get the big bites today but hopefully tomorrow that will change. Overall, we’re right where we want to be.”

The SUNY Plattsburgh team of Chris Benninger of Grand Island, N.Y., and Richard Lee of Port Kent, N.Y., found itself in exact the same position at the end of the day as when it started – in third place. In fact, not only did all five teams atop the leaderboard after day one qualify for the top-five cut, but third place through fifth place on the leaderboard remained unchanged from day one.

But while Plattsburgh held on to their day-one ranking, qualifying for the national championship in the process, the day was far from easy.

“It was one heck of a day out there,” said Lee. “I lost a 3-pounder that jumped right at the boat and spit the hook out at me. And after that, I was really worried. I also didn’t think we had the weight we had today. I thought we only had 6 pounds, but we wound up with 7-10. We’re definitely wicked happy when we saw that. And now we’ve made the finals. It’s an awesome feeling.”

The team said it employed a weighted, wacky-rigged Senko to land the majority of its catch.

“We were fishing shoreline in anywhere from 1 to 15 feet of water,” said Lee. “Mostly we were looking for shoreline with oak trees, laydowns or stumps.”

After suffering through a “terrible” practice, the Plattsburgh teammates couldn’t be happier to still have a chance for a tournament title. And no matter what happens tomorrow, they’ll be heading to the national championship sometime next spring.

“Tomorrow we’re just going to go out there and have a fun day of fishing,” said Lee. “We’re really going to enjoy it. And the best part of the whole thing is that we’re going to be fishing in the national championship.”

Virginia Tech flexed its muscle during the second day of competition at Philpott Lake, sending two teams into the finals and qualifying each of those for the 2013 FLW College Fishing National Championship. 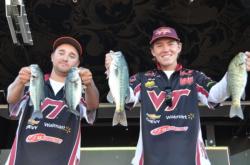 “It’s fantastic,” said White, who had to fish solo on day one while he awaited the arrival of his partner who was one day late due to prior work commitments. “We did catch less than yesterday and we had a lot of missed opportunities. But overall, it was still a pretty good day. David really did a good job; he really helped the team out today.”

White said that all of the team’s fish came on a drop-shot with a Berkley hand-poured worm.

Although White will have to fish solo in the finals, as Bryant once again has to depart for work commitments, the team should be able to regroup for the national championship. 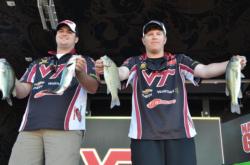 Meanwhile, the other Virginia Tech squad comprised of Andrew Jackson of Lebanon, Va., and Patrick Snellings of Fredericksburg, Va., rounded out the top-five team finalists with a total catch of 14 pounds.

“It’s awesome,” said Snellings. “It’s one of my last collegiate tournaments and it feels great to qualify for the national championship. That was our whole goal coming into this tournament.”

The Virginia Tech club said that all of its fish came on a drop-shot, alternating between 4- and 6-inch worms.

“It was a real grind out there,” said Jackson. “We’re fishing 5 to 30 feet and we’d average about one fish an hour. We have about four or five spots and we’re mostly targeting rocky banks, clay banks and laydowns (and any combination thereof).”

As for tomorrow, the team said it’s going to abandon any conservative strategy and go for broke.

“We’re going to go out there and try to get some big bites,” said Snellings. “The drop-shot is a good finesse technique but now that we’ve already qualified for the national championship, we want to win to win that boat so we’re going to (upsize) our baits to big jigs and twowaters. It’s either go big or go home.” 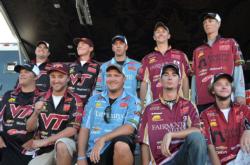