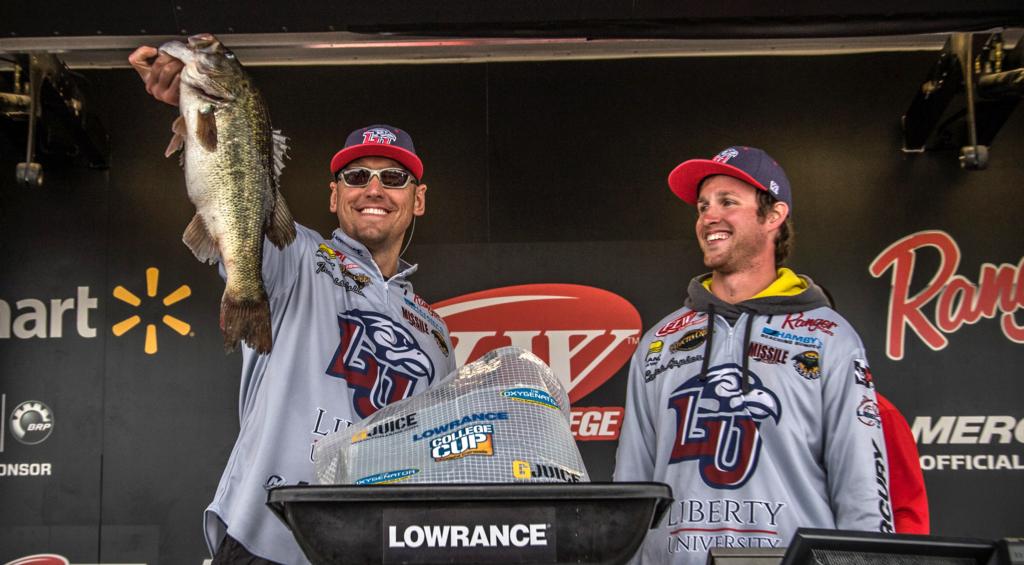 Rulle and Eppler were the last anglers to weigh in on day one, and their five-fish limit gave them a lead of more than 3 pounds ahead of Eastern Kentucky University veterans Kyler Raymer and Ethan Snyder, who had 18-15. The surprise team of the tournament so far is Colorado Mesa University’s Josh Worth and Kennedy Kinkade, who brought in 18-10 despite never having fished east of the Mississippi River before. Worth and Kinkade are in third place, followed by Cade Laufenberg and Wyatt Stout of Winona State University, and Ben Curry and Tim Ward of Auburn University, both teams with 17-8.

“I caught the 7-9 fairly early in the day, but we caught fish off and on all day and culled six or seven fish,” says Rulle. “We have a couple of shallow-water patterns going, but the bigger fish came from deeper water adjacent to the shallower water we’re keying on. I say shallow – it’s about 10 feet deep on average.”

Had Rulle not caught the biggest bass of the tournament so far, it would have cost them about 4 pounds and still kept them near the top, notes Eppler.

“We were a bit surprised they bit as well as they did,” adds Eppler, an exercise science major. “We thought the weather would set them back a bit, but even so we have backup plans for every condition we thought we might encounter. We feel pretty good about our chances of fishing Saturday [in the championship round of 10].”

The Liberty pair is fishing the main lake and creeks, but wouldn’t elaborate on the pattern or lures. 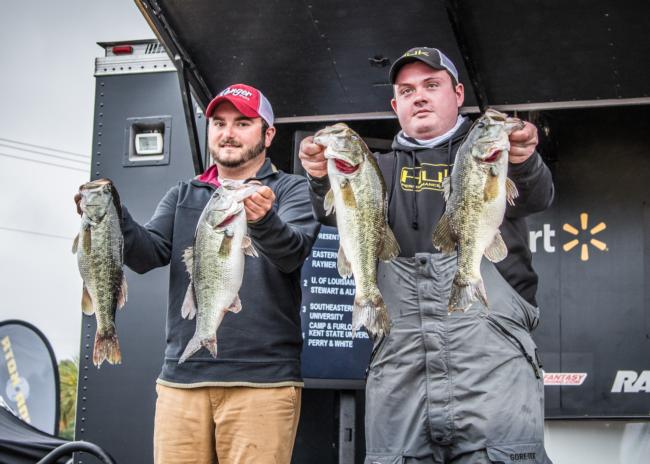 This is the third championship tournament for Kyle Raymer, who fished on the 10th-place team last year at Lake Keowee. He and Ethan Snyder were fishing “a non-blueback pattern” in the main lake, meaning probably they were sight-fishing for bedding bass. Despite some conjecture that the bass spawn was over on Lake Murray, several anglers reported seeing or catching bedding fish in the back-ends of coves and around some docks. 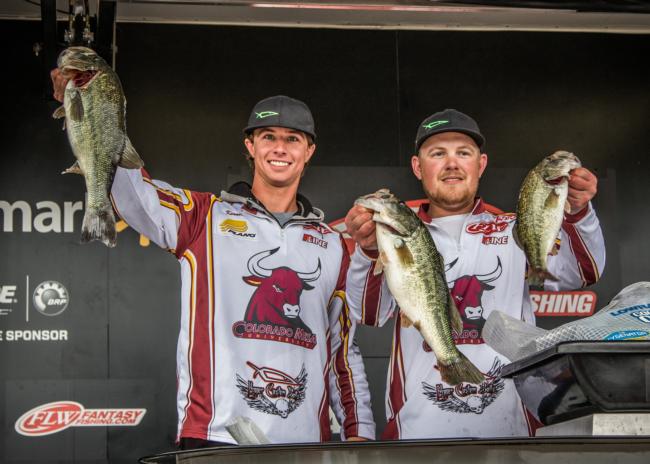 When asked if anything about the East reminded him of fishing back home, Josh Worth said, “Yes, the Smoky Mountains.” Even so, the Colorado team made itself at home on Lake Murray. Worth and Kennedy Kinkade culled three times and caught most of their fish between 7:30 and 11 a.m. Kinkade reports that they were fishing areas where blueback herring generated explosive blowups of bass during the morning. They plan to stick to their basic game plan Friday. 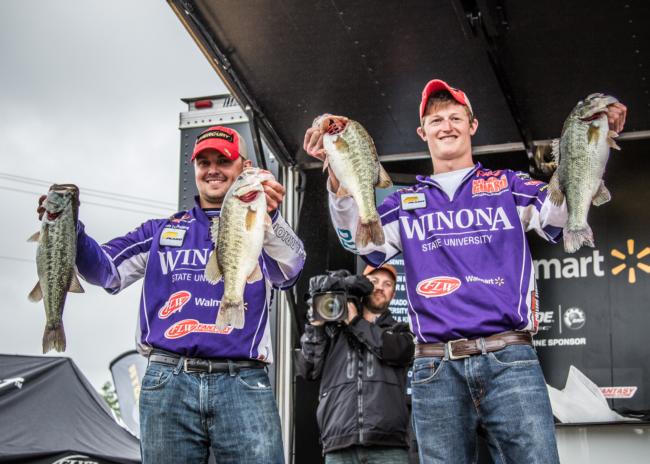 Cade Laufenberg and Wyatt Stout are perhaps the only anglers in the tournament to catch fish on frogs. According to Stout, a biology major, Laufenberg tried a SPRO frog along a shallow bank on the last day of practice and promptly hooked a 4-pounder. Though the team caught most of its fish on the jerkbaits and swimbaits typically used to take advantage of the blueback spawn, Laufenberg and Stout boated three keepers on frogs in the opening round. They culled four times, and made their most important cull of the day with about 15 minutes to go before they had to leave their spot. 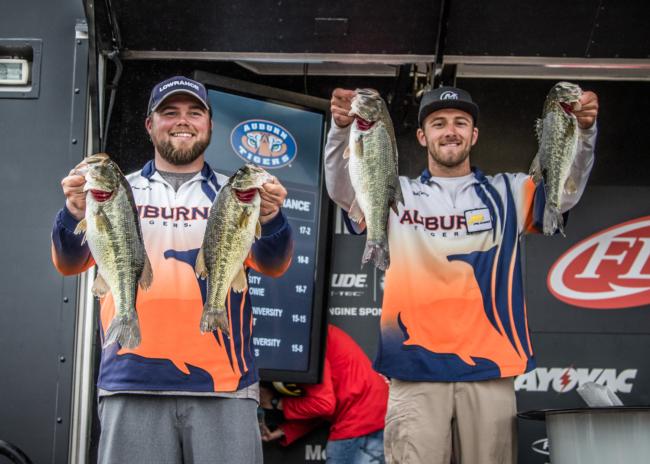 Ben Curry and Tim Ward compose one of two Tiger teams in the championship. The pair caught its fish on topwater lures as well as hard and soft jerkbaits. Ward says they caught most of their fish early in the day and culled twice.

“It was hard to get a bite after lunch,” he says, “and we might have to work a little harder Friday to get a good limit. We’re just running from point to point and fishing what we think will draw bites if the fish are there.”

Of the latter group, the Gamecocks are the most likely to make a move up in the standings. Walters and Brannon culled several times and are fishing areas where blueback herring are likely to congregate for spawning, and draw bass to them.

“We’re not running all the places we know about, but we might start moving around a little more as the changing weather dictates,” says Brannon. “The fish we culled were cookie cutters – we were just culling ounces. We need to get on some bigger fish, but we’ve got some ideas about where to find them.”