Winona State Pulls Through on Carlyle 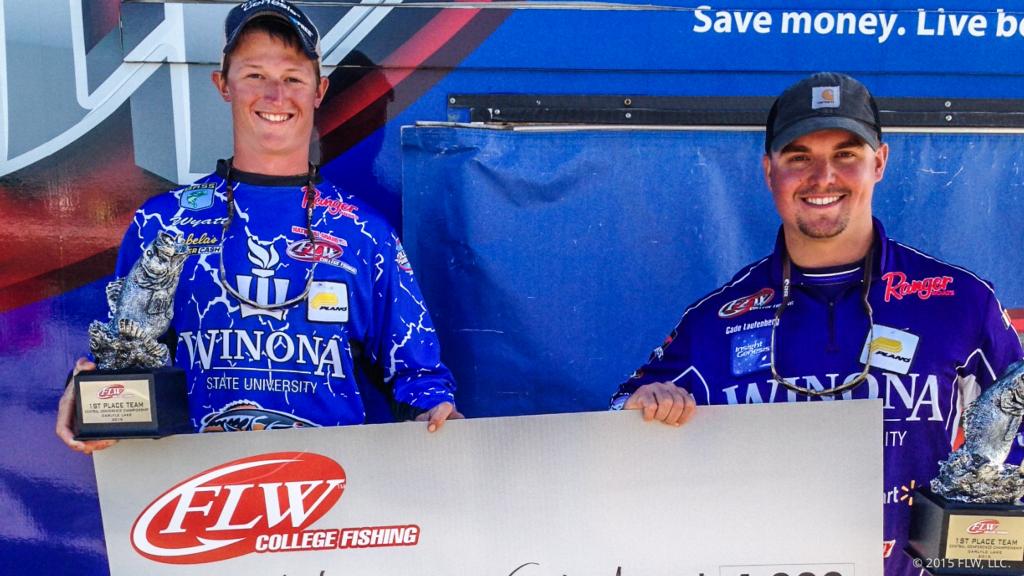 Carlyle Lake in southern Illinois is known to be a fickle beast, and it certainly laid down a challenge for the teams fishing the FLW College Fishing Central Conference Championship there Oct. 3-4. Cade Laufenberg and Wyatt Stout from Winona State brought four bass to the scale worth 12 pounds, 6 ounces on day one. Day two was humbling, as Illinois State’s Bryce Wegman and Taylor Umland were the only anglers to weigh a fish. Winona’s day-one lead was enough to hold on for the win as Laufenberg and Stout punched their ticket to the 2016 FLW College Fishing National Championship and earned a $4,000 payday.

A little bit of history

Laufenberg has some previous experience on Carlyle Lake from a College Fishing event back in 2012, but he knew the Conference Championship would be a stark contrast from his last visit.

“We really didn’t think the lake would fish like it did back in 2012,” says Laufenberg. “The lake has changed so much since then, and it is much lower than it was. Back in 2012 the lake was 4 feet high, and we caught them in flooded cover. We knew that wouldn’t happen this time.

“The plan for practice was to do everything in our power to work our way up the river that flows into the lake because we thought nobody else would try it,” Laufenberg continues. “After plowing through a foot and a half of water covered in stumps with my engine alarm going off we knew we needed to try something else.”

The Winona State team changed it up on its second day of practice and wound up in the same creek where Laufenberg had caught his fish in 2012 – he finished in fourth place that year.

“There wasn’t a lot of hard cover in the water in that creek, but we found a rocky point and I caught a 5-pounder,” explains Laufenberg, a senior majoring in individual studies. “A lot of people said we shouldn’t have stuck that fish, but I was happy. It gave me the confidence that we could get bit in that creek.”

All in on day one

When the tournament started, Stout and Laufenberg returned to the rocky point that produced the 5-pounder the previous day in practice. After close to an hour of no action they ran to the bank where Laufenberg had caught them in the previous tournament but fished out a little deeper.

“We came up to a point in the creek and noticed on the electronics that there was a big drop right next to the point,” says Stout. “We idled it and found the creek channel swung right up next to the point and dropped from 3 or 4 feet down to 10 or 11 with stumps on it.”

After fishing the spot for 10 minutes with no results, Stout had what he thought was a bite. It was enough of a clue for them to stay a bit longer, and eventually Stout stuck a 3-pounder. About 45 minutes later they doubled. By the end of the day the Winona anglers had scraped four bass from the drop.

Despite their best efforts on similar structure elsewhere, Laufenberg and Stout couldn’t replicate their day-one success on day two and returned to the boat ramp with mixed feelings and an empty livewell. Luckily, they had caught enough on day one to survive.

“We stopped near the ramp with like two minutes left to fish, trying to catch at least one fish,” recalls Stout, a junior biology major. “We were feeling pretty low when we got to the ramp and most of the teams had left to head to Walmart [for weigh-in]. There was one team still there, and they hadn’t caught anything either but heard only one team caught a single fish. That is when I felt like we had it.

“This was really a special tournament,” continues Stout. “Cade got me to come to Winona to fish. He basically recruited me, and we have fished together ever since. So it was really cool to get this win in what could have been his final tournament.”

The Winona State team stuck with a combination of jigs to do its damage. Stout fished a 1/2-ounce Jewel football jig (brown and black skirt with red flake) and a green pumpkin Berkley PowerBait Chigger Craw. He threw it on a 7-foot, 6-inch, medium-heavy Kistler Magnesium rod with 20-pound-test Seaguar Invisx fluorocarbon spooled on a Shimano Curado. Laufenberg stuck with his confidence bait – a 3/8-ounce Lethal Weapons Lures Lethal Bug jig with a green pumpkin/orange skirt. He matched a Zoom Speed Craw with it and threw it on a 7-foot, medium-heavy G. Loomis rod and 20-pound-test fluorocarbon. 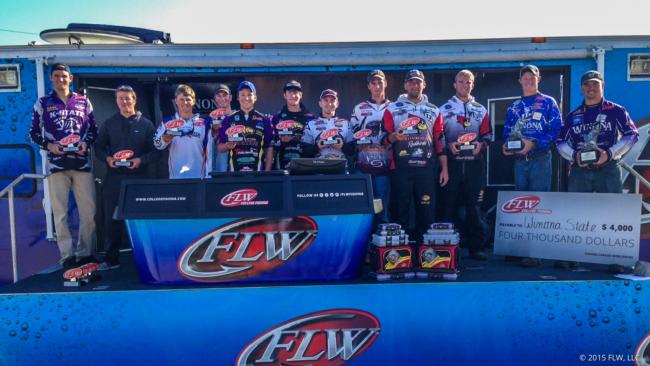 The top eight* teams that advance to the 2016 FLW College Fishing National Championship are: