Getting to Know Lake Keowee 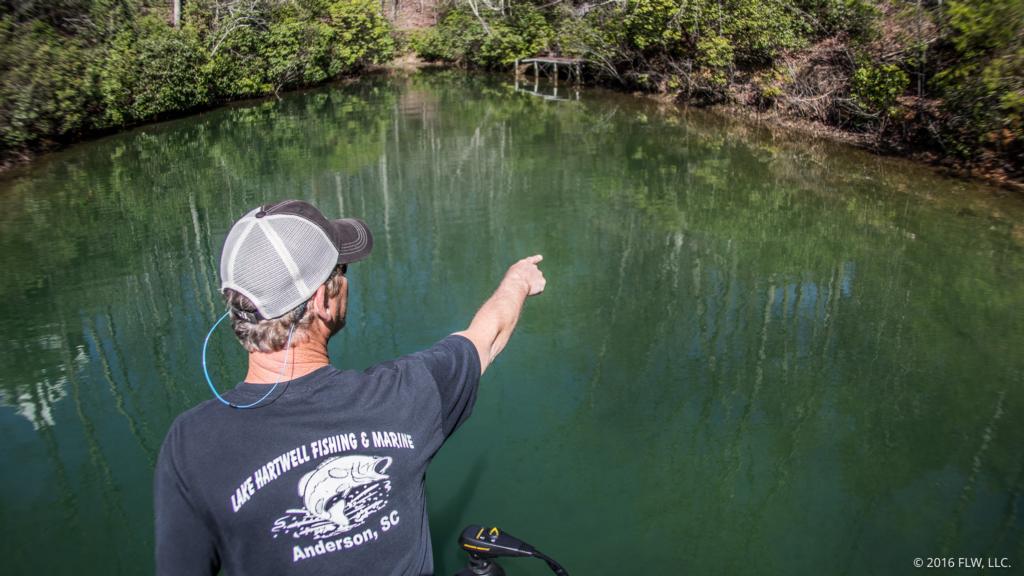 This week, we might get to see just what Keowee is capable of as it plays host to the 2016 FLW College Fishing National Championship. To learn more about the fishery, we begged local FLW Bass Fishing League angler Randy Childers to take some time away from his day job managing Lake Hartwell Fishing and Marine in Anderson, S.C., to give us a tour of the lake.

Last week, Childers provided FLW with an in-depth update on the fishing conditions on Keowee. He said largemouths were already moving up, and several good ones had been caught from beds.

Several teams in the field reported reading the article and using the information in it as their starting point for practice, which started this morning. Based on our tour of Keowee, it appears that a few things have changed, but one thing has not: Keowee is likely to churn out some big limits later this week when the tournament begins. 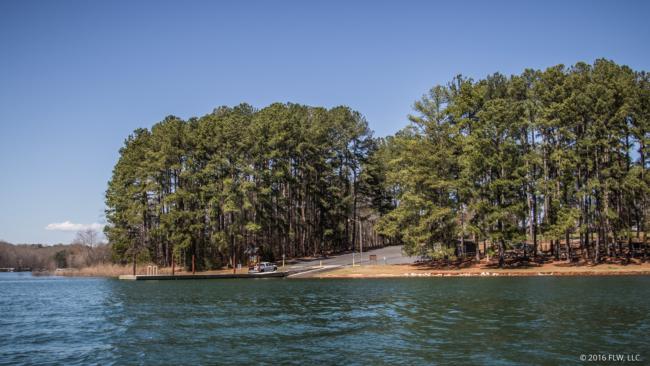 We meet Childers at South Cove County Park (above) in Seneca, which is where the tournament field will take off on all three days of competition, Thursday through Saturday. We wait until about 9 a.m. to go out to give the sun some time to get high in the sky. The sun’s heat should push more fish to the banks, and the sunlight helps with spotting bass in the shallows.

Childers tells us there are rumors swirling around of a 10-pounder caught off bed over the weekend. Yeah, we want to run into one of those beasts, but whether or not we do, it’s going to be a beautiful morning, with clear skies, barely a lick of wind and 50-degree air. The high is forecast to be 80 degrees. 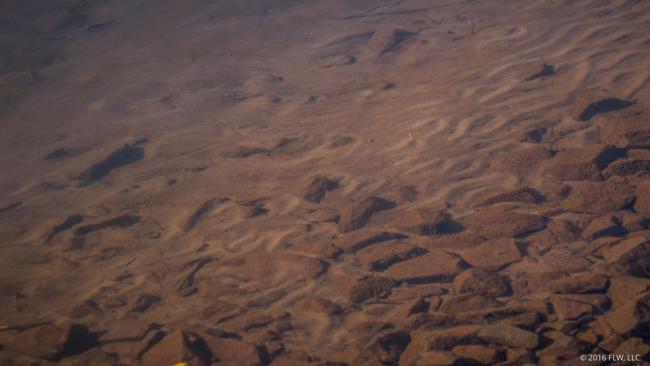 The clear waters of Lake Keowee are pretty typical of the deep reservoirs in this part of South Carolina. The lake has perfect habitat for both spotted bass and largemouths, and the first challenge for college anglers this week is figuring out which species to target … or, more likely, how to catch both. Childers, who’s one of the best in these parts, says most tournaments are won with mixed bags, and catching a big largemouth or two each day is critical.

“It [Keowee] is one of my favorite lakes. I’ve been fishing here so long,” says Childers, who estimates he’s spent almost three decades on Keowee. “But you kind of have to key on largemouths. That’s not to say that spots can’t win, because they can.” 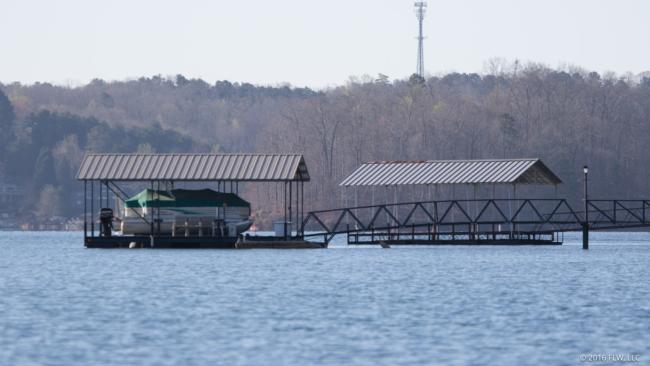 The water temperature near South Cove is about 58 degrees. This area is located on the southern half of the reservoir, which is actually two lakes that were connected after flooding. Childers says a lot of BFL events are won in the South Cove area.

The “lower lake,” or the southern half of the fishery, is surrounded by short hills and has slightly flatter banks than the “upper lake, where the landscape begins to transition into more mountainous terrain with steep-sloping banks. The water in both areas is very clear. The south end near the ramp has visibility of about 9 to 10 feet, though Childers says there’s stained water way up some of the creeks. It's likely that some of the college anglers will run to such places in search of both a stain and bedding largemouths. 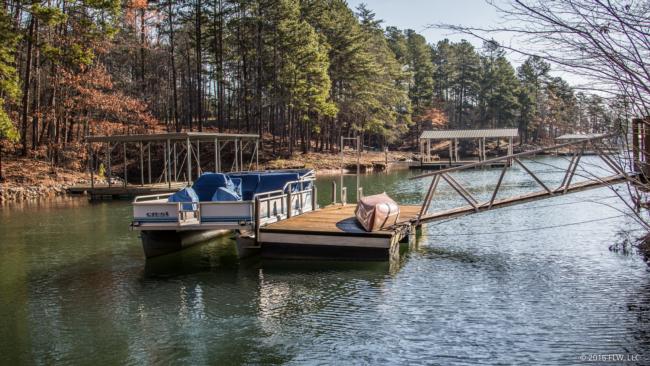 We head north to check out some docks. Keowee is full of them, and the bass use the docks as cover to spawn along the banks. 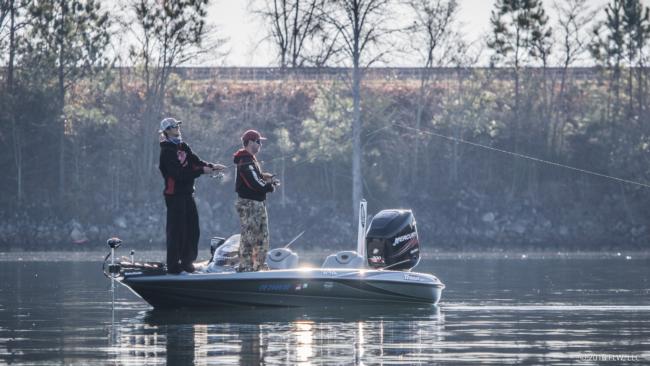 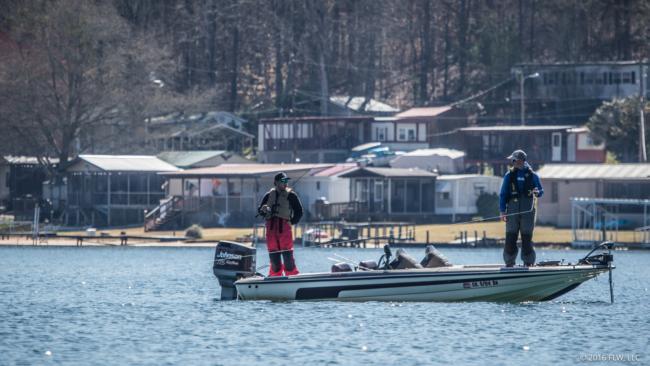 We spot a few teams out practicing on our way north. 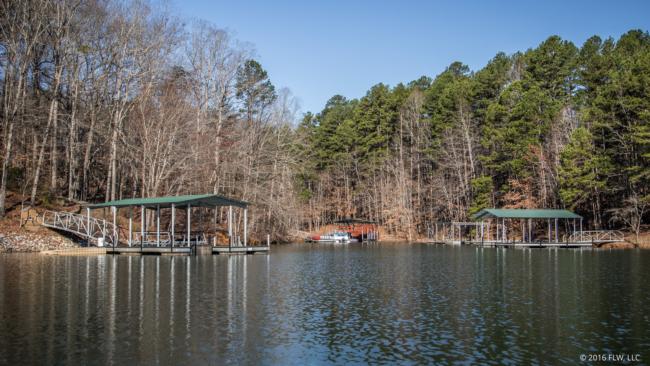 Small cuts like the one above are the types of places where anglers will find spawners, cruisers and some bass that are getting ready to spawn by suspending up underneath the dock floats.

The lake is full today – it can fluctuate by about 2 feet in a single day – and we don’t see any bass on beds in this area, just a few small cruising fish. Childers suspects some of the beds might have been covered up by the extra water, or maybe the fish haven’t moved clear up since the lake has risen. He also cautions that the water could drop back down by game time. 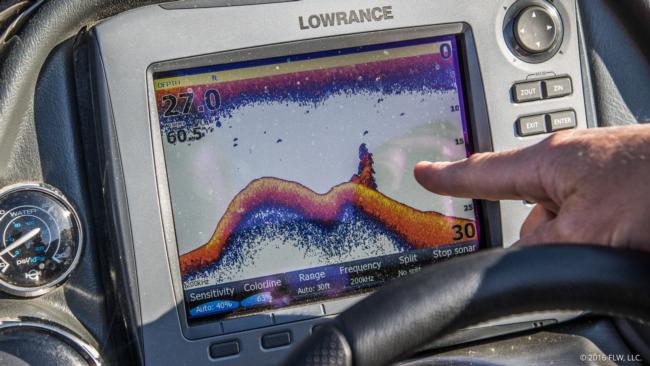 But anglers shouldn’t rule out these cuts even if they don’t have any bass on beds. Folks in these parts like to fish “ditches” – the low “valleys” in the bottoms of these cuts where the lake floor slopes down from each side. Fish use the ditches to transition in and out of spawning areas. Childers likes to fish ditches with an under-spin, drop-shot or jerkbait, depending on the time of year.

Brush piles placed in the cuts are also productive targets. We happen to idle over the brush pile shown above. There’s a bass right there on the top. 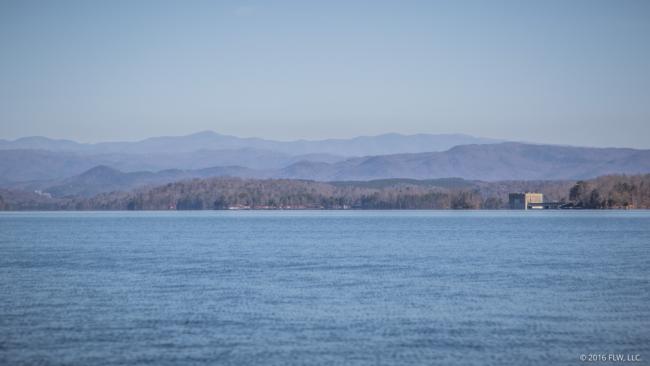 Most of the lake has a sand or clay bottom, though there’s a lot of riprap on the banks and some rocky shelves here and there.

We find a few more small largemouths as we tool around choice pockets on the trolling motor. No big ones yet though. 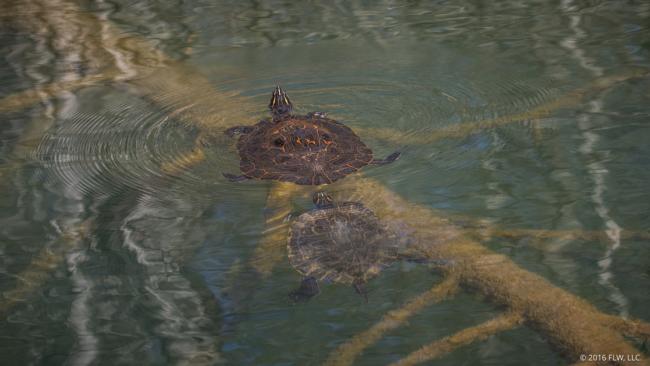 There are plenty of turtles. We also saw a few ducks and geese, plus enough big carp to get us excited in the occasional fit of species misidentification. 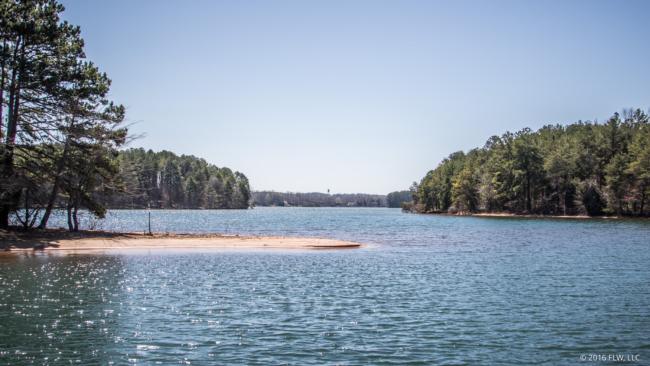 The spotted bass should be spawning about now too, and a few fatter prespawn spots would really help a team put together a nice bag.

Sandy blow-throughs like this one, located between an island and shore on the main lake, are spotted bass spawning grounds, says Childers. When the lake is lower, some of them are too shallow to cross.

Speaking of islands, Keowee’s got lots of ’em, big and small. 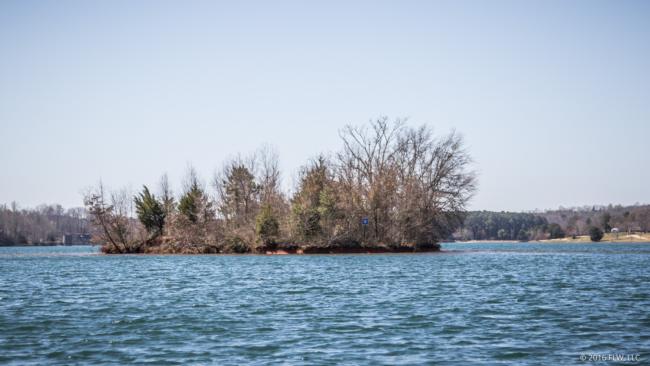 Don't be misled by all the talk about spawning fish. Childers says there are fish to be caught from 1 foot deep to 80 feet deep on Keowee year round – both spots and largemouths. The depths shouldn't be overlooked.

There’s rain and light wind in the forecast for the tournament too. If the conditions make sight-fishing a challenge, a team just might surprise everyone and win this thing offshore, or perhaps on a middepth prespawn pattern.

Brush piles, points, drops, sunken islands and the like all harbor bass. Childers shows us a spot in the main lake where he caught a 9 1/4-pounder two weekends ago en route to winning a local tournament. He caught the fish on a jig, but he isn’t willing to show any details about the area on camera – no surprise there. 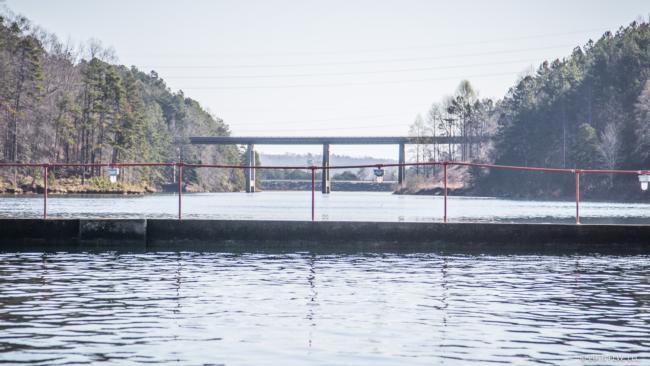 Keowee really is a fantastic location for the championship because it has a little bit of everything, and it’s a unique fishery due to how the lake is used. Duke Energy built Oconee Nuclear Plant right smack dab in the middle of the reservoir, where the two lakes come together.

The photo above shows the plant’s “skimmer wall,” where water is pumped through a canal and into the plant’s innards for cooling purposes. Hot water is discharged back into the lake near here, so the water in the center part of the lake stays warm all year. As a result, nearly every cold-weather tournament could be won either from the skimmer wall or the discharge area located around the bend.

For that reason, many local tournaments ban fishing in these areas to avoid an all-out race to get there from takeoff and to make the competition more challenging. The National Championship is being handled similarly. Casting over the skimmer wall is banned, as is fishing the mouth of the discharge area.

“I’ve never fished it because it’s so popular,” Childers says of the area. He’s a man who apparently likes a challenge too. 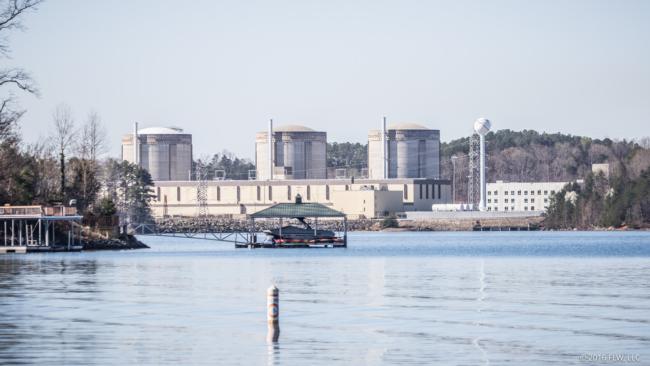 The discharge area for the power plant, shown above, is commonly referred to as the “hot hole.” Water temp in this area is 62 degrees. 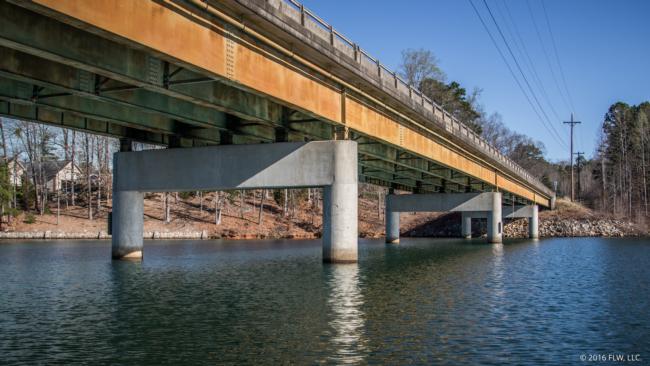 Spotted bass anglers ought to be able to catch a few fish off the various bridges in the area.

We cross under one bridge located in a narrow area between the skimmer wall and the hot hole. Noticeable current swirls around the pilings. Childers says he uses this area to determine if power-plant managers are pulling water – if there’s current, the water is moving. The current also concentrates bait and bass, making it a productive little spot. We see a massive cloud of bait as we put the boat on plane on the other side of the bridge. 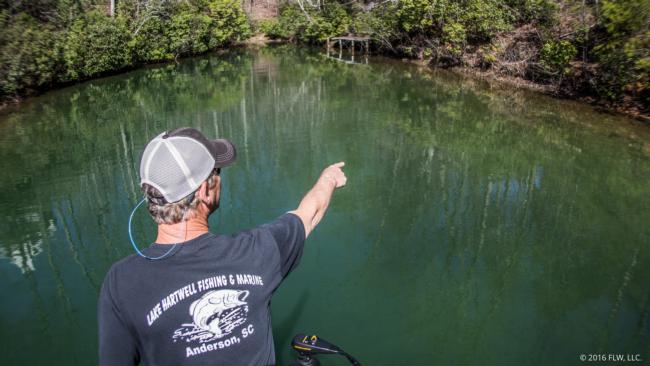 We continue north to check a series of pockets that Childers says almost always have a few fish on beds this time of year, but it’s slim pickings today. We spot some decent 2- to 3-pound fish cruising, but no fish locked on beds.

One pocket is surprisingly cloudy. Too cloudy for sight-fishing. It’s because of pollen in the water.

We’re now a couple hours past start time, and the wind is blowing a little more. The resulting ripples and shady banks are making this search even more difficult. 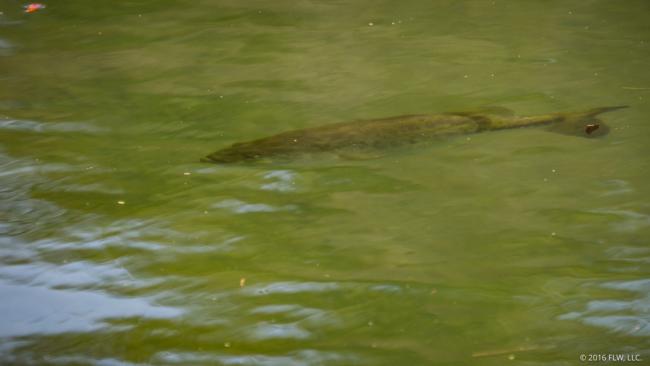 We continue north and locate an area with 65-degree water and a whopping 13 feet of visibility. Childers is a bit restless now. He knows we want to see a Keowee hawg on bed, and he’s not willing to let the lake defeat him. He quickly hops from pocket to pocket.

Finally, we round a point and a dock located just inside the adjacent pocket when Childers finds what he's been after.

“Right there. That’s the kind of fish we’re looking for,” he says. “There’s another. No … there are three.

“I think that one’s the buck,” he says, pointing.

The buck is a 3-pound-class fish, sharing shoreline with a pair of 4-plus beauties.

The fish spook at our approach, so we stick a GoPro into the bottom a few yards away and carefully ease off the bank to avoid blowing out the bed with silt.

We finish searching the pocket and spot one other quality fish under another dock. She disappears before we can get a shot with the camera.

After that, we swing back by the previous bed and snap a few photos of the fish hanging around the dock and out in front of the bed. They’re obviously agitated, so we make a quick tweak to our GoPro setup then leave for about 15 minutes to let them rest. 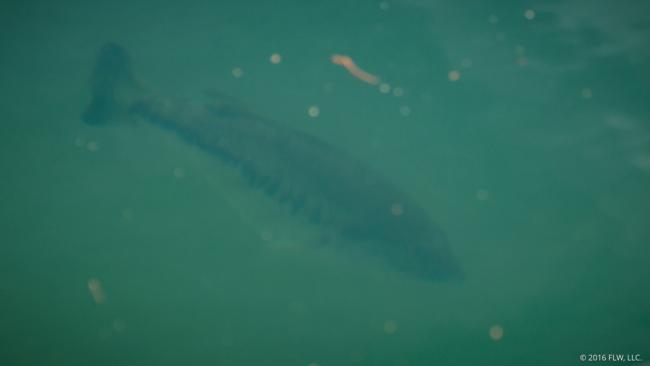 When we return, two of the fish are back by the bed, and the third is hanging out just under the surface about 5 yards away.

It’s the perfect chance for photos. 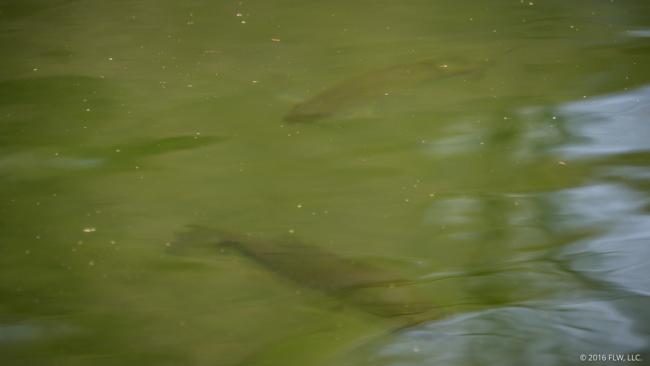 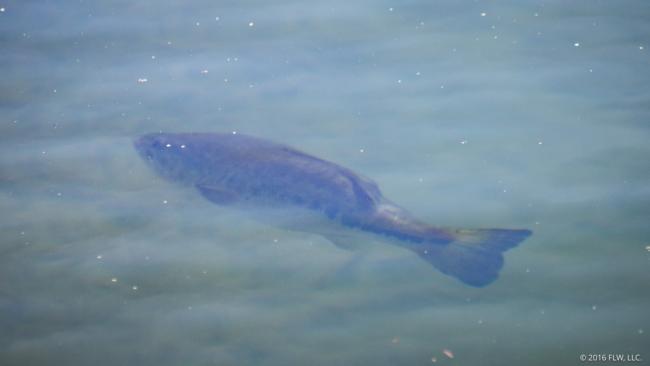 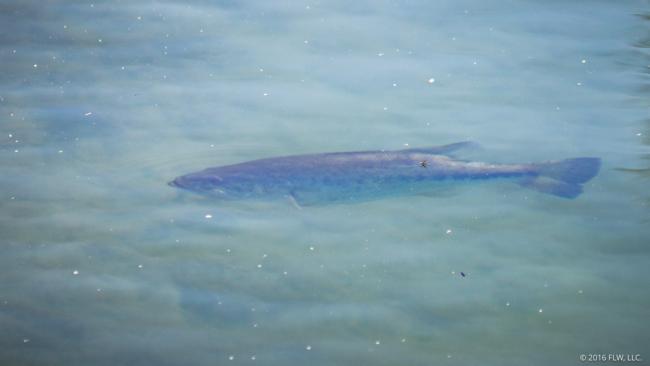 The GoPro trick worked perfectly too. Check out the footage below (the video has been sped up to double the actual speed):

And a couple more photos … 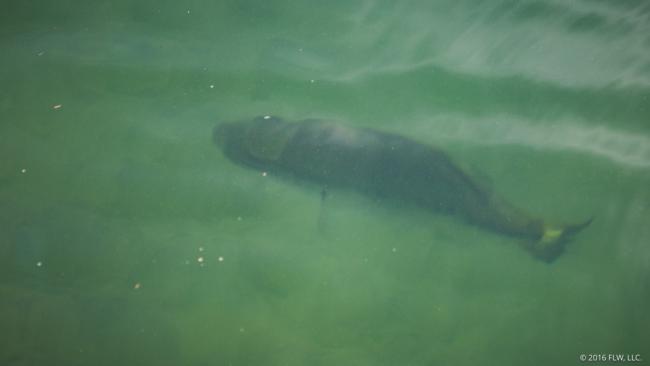 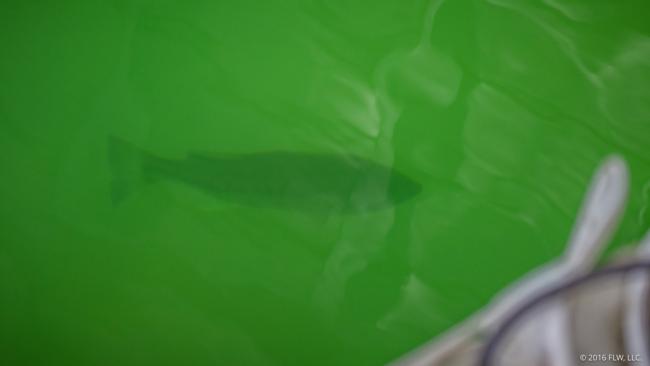 It’s almost lunchtime, and Childers needs to get back to work, so we pull the GoPro and keep heading north to our last stop … Jocassee Dam.

Childers says this area is another popular tournament spot, especially when the inflow is heavy and the resulting current concentrates the fish.

For reference, if you let ’er eat, it’s a 25-minute run from South Cove to Jocassee Dam (below). 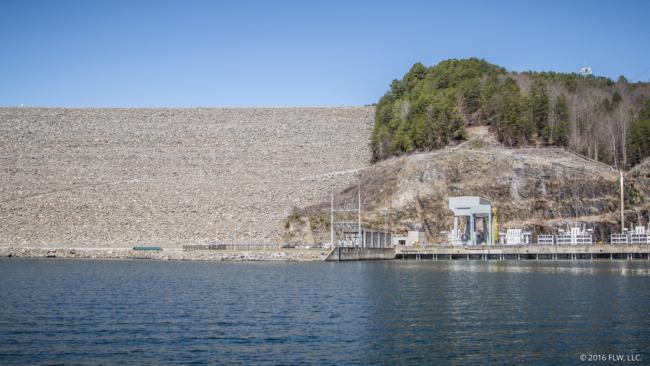 We’ve seen most of Lake Keowee in our morning on the water, save for a few longer creek arms we neglected to scout. In the process, one thing has become clear: This isn’t going to be an easy tournament.

It’s spring in the Carolinas. Things are changing, and while largemouths obviously want to move up, they’re not everywhere.

The water temperature varies from one end of the fishery to the other, and the ultra-clear water will make shallow fishing a challenge. Plus, if the weatherman is right, Mother Nature has a few more tricks to play on the anglers later this week.

To win the National Championship will take a rock-solid game plan and the willingness to scrap it all on a moment’s notice when the conditions dictate an audible.

Teams have come from as far away as the Pacific because they think they can make it happen this week. We’ll find out who’s got the chops on Keowee come Saturday afternoon.