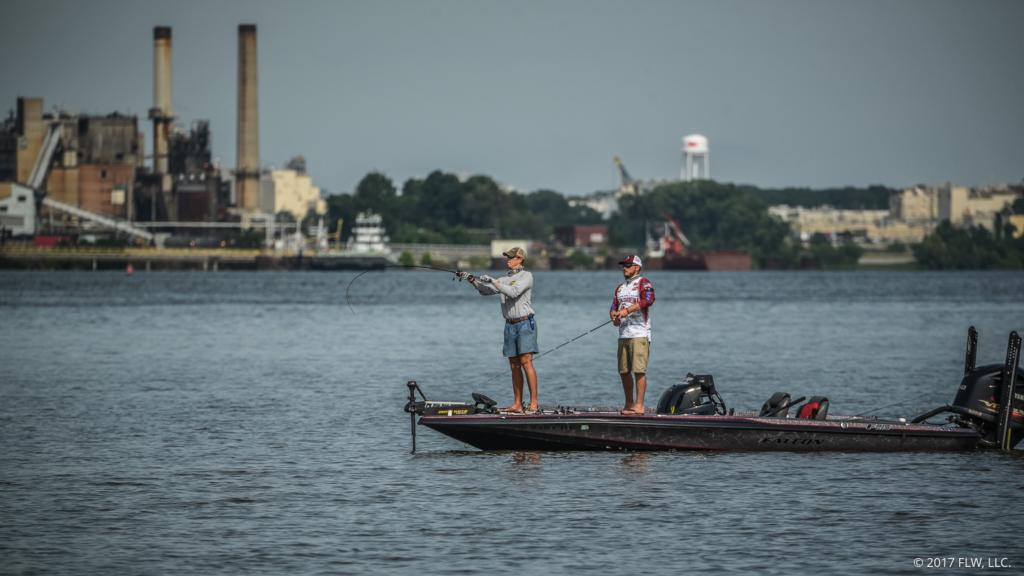 Summer is in full swing along the Tennessee River, and the teams in the YETI FLW College Fishing National Championship presented by Lowrance C-Map Genesis are taking advantage of the current flows in Wheeler Lake to bring in some solid bags of bass.

The leading team of Patrick Walters and Gettys Brannon from the University of South Carolina is getting it done offshore, as are other teams just behind them in the standings.

Here’s a closer look inside the approaches of the top five. 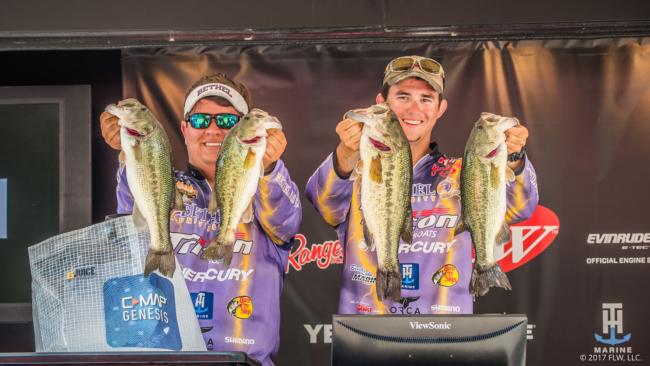 Bethel University’s Evan Owrey and Kristopher “KJ” Queen got to hold the lead in the championship for just a quick minute before the South Carolina powerhouse team of Walters and Brannon bumped them down to second.

The good news for Owrey and Queen, however, is that they are only behind by 8 ounces, and they seem to be dialed into the currents of the Tennessee River.

The team got off to a good start with a quick limit this morning in a current spot and then bounced around after that.

“After we got a limit, we just went junk-fishing,” Owrey says. “This lake might be on the Tennessee River, but it does not fish like Kentucky Lake, Pickwick or Guntersville. You can’t just sit in one spot and catch them all day. You’ve got to move around.”

“Our home water at school is Kentucky Lake, but this place doesn’t really fish like Kentucky Lake to me,” Queen adds. “It fishes more like Lake Dardanelle on the Arkansas River. The fish don’t really group up in big numbers here like on Kentucky. It’s more like one here and a couple there, so that’s the approach we’re taking.” 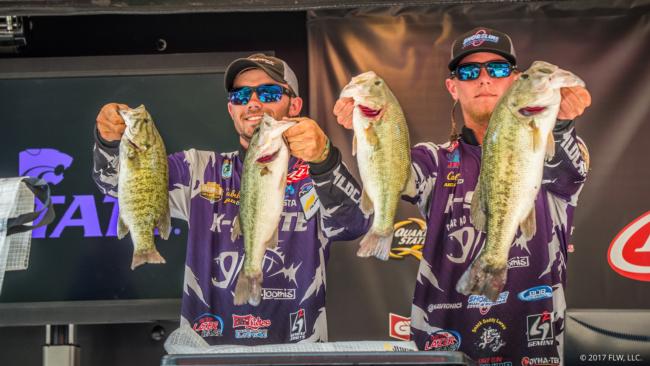 The weights are stacked up at the top of the standings at Wheeler Lake, and the team of Travis Blenn and Kyle Alsop from Kansas State University grabbed the third-place spot with 16 pounds, 8 ounces – just 11 ounces off the lead.

K-State got of to a blistering start this morning when the team caught a good keeper on the first cast and then went to another spot and immediately caught a 5-pound, 10-ounce kicker, followed by another solid keeper.

“Our first three fish weighed about 11 pounds,” Alsop says. “That got the day started off in a good way and gave us some breathing room to try some other things.”

“When your day starts like that, you know you have the rest of the day to catch a couple of 15-inchers,” Blenn says. “It gave us a chance to try some new places we didn’t fish in practice.” 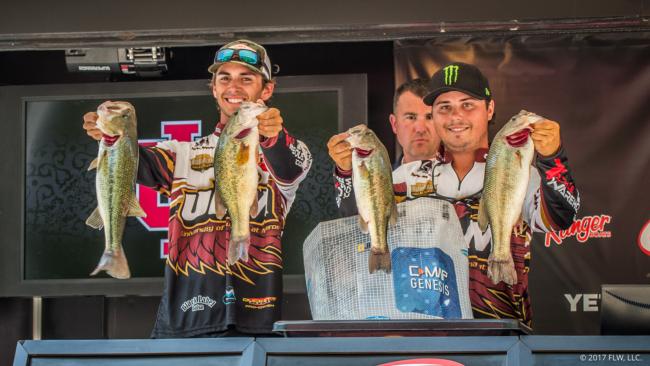 Tyler Stewart and Nicholas Joiner from the University of Louisiana-Monroe nabbed fourth place on day one with a limit weighing 15 pounds, 4 ounces.

The team got off to a fast start this morning, sacking a limit on its first stop – an offshore school. One of the advantages of fishing as a team in FLW College Fishing is being able to keep a school fired up between two anglers, and ULM took full advantage of that this morning.

“We had a limit by 8:30 a.m., and then we had what we weighed in by 9 o’clock,” Joiner says. “Once we started catching 2-pounders off of that spot, we decided it would be better to try to hunt a big fish up shallow, and we spent the rest of the day looking for a big one.” 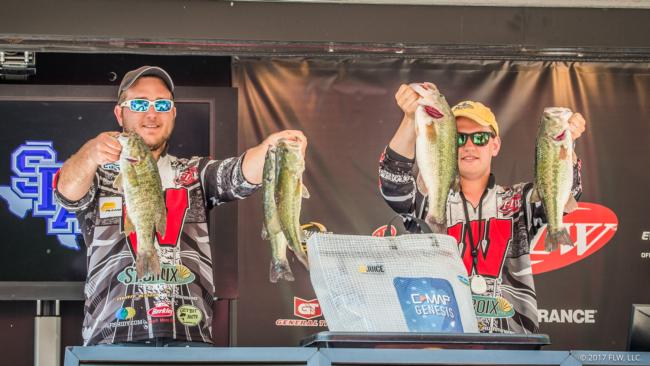 Jake Anderson and Bryce Smith are a long way from their home near the University of Wisconsin, but that doesn’t mean the two don’t know how to read current to catch bass.

Both anglers applied their experience from fishing the currents of the upper Mississippi River to the Tennessee River for a catch of 14 pounds, 8 ounces to round out the top five. Their limit included one nice smallmouth, which made them feel at least a little closer to home.