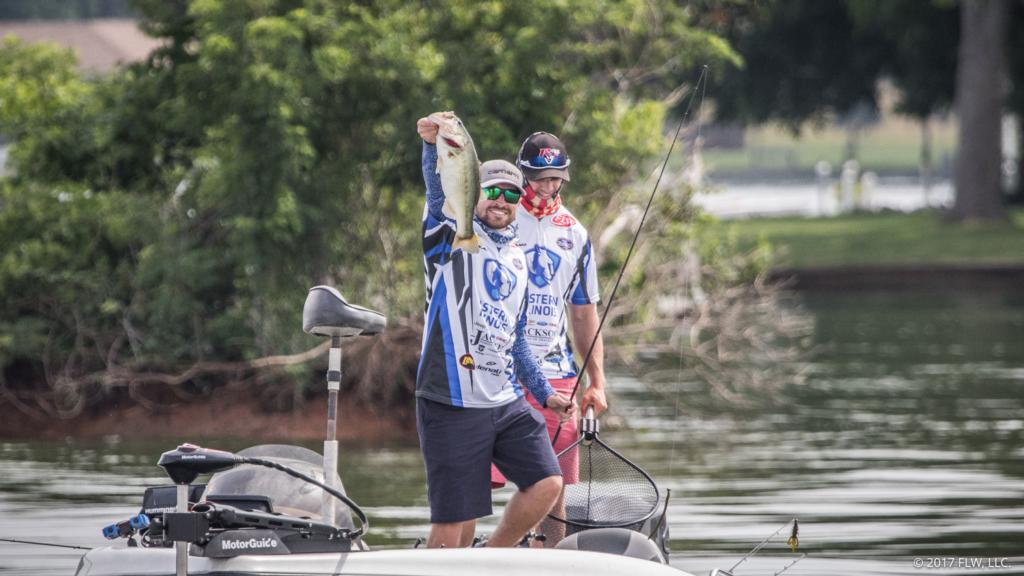 This story will be updated throughout the day with more from day two of the YETI FLW College Fishing National Championship presented by Lowrance C-Map Genesis on Wheeler Lake.

Here are the last two catch reports for the day:

Otherwise, the big news is that the current has started flowing, so there’s hope for a last-minute bite on offshore structure. The current is strong enough in some areas to feel it working against the boat. That’s good news anytime you’re on the Tennessee River. Most of the teams are “fishing out” – either on the main lake or in the larger creeks. Fishing docks or inflows are the other productive patterns.

All in all, teams caught a lot of small fish again today, but quality bites were tough to scratch up. The leaders, Gettys Brannon and Patrick Walters of the University of South Carolina, are working on another bag in the teens and could come out of today in prime shape to win a second championship and the third in a row for USC.

We’re nearly two hours until weigh-in, and now is the time for teams to make a last-minute run at the top 10. The weights are so darn close that it’s really tough to predict who’ll be in and who won’t. Several teams who were around the 20th-place mark yesterday have had good days today and might move up into cut range, while others are struggling to get bites.

Here are some recent updates:

Rudy Directo and Tristan Merlaud of Humboldt have two keepers.

Tristan Crowder and Lake Blasingame of the hometown team from University of North Alabama are pretty frustrated to only have three small keepers.

Missouri’s Gabriel Dubois and Brandon Heizer have 9 pounds, though it’d be more if they hadn’t jumped off a 2 1/2 at the boat about an hour ago.

Cody Peak and Jeff Roman Clayton of Mississippi State are working a bank right outside the launch where they caught three keepers yesterday. They have a decent limit of about 10 pounds but figure they need 13 to 14 to move up from 41st place and into the cut.

UCF’s Kyle Oliver and Hunter McKamey have three small keepers. They’ve been torching the smallmouths but are cursed with 14-inchers. Smallies have to be 15 to keep.

Dillon Roberts and Bret Fite of Rogers State were in 11th to start the day. With 10 or 11 pounds to go with 12-5 yesterday, they might be in the top 10 by day’s end. They’re fishing right outside of First Creek, where the tournament launched.

McKendree’s Reece Ellerbush and Austin Chapman are having a rough day. They have just one in the box but have had four really solid bites. The fish just aren’t eating their topwater well enough to stay hooked.

As for conditions, it’s still slick, flat, dead calm and humid as all get out. A few fluffy clouds in the distance break up a hazy sky. And it’s hot. Teams will have to earn it today. 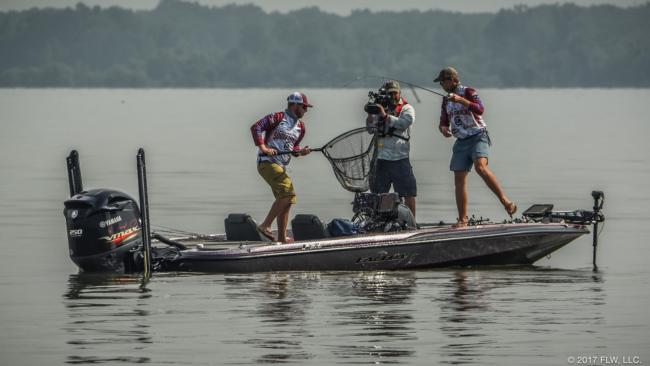 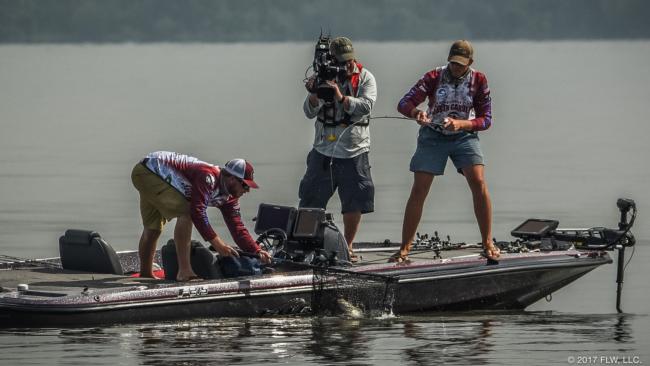 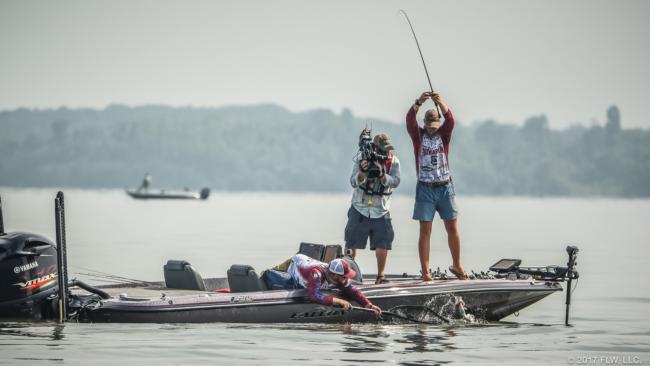 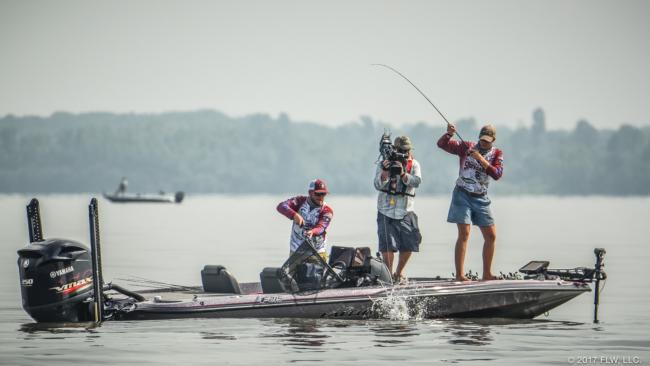 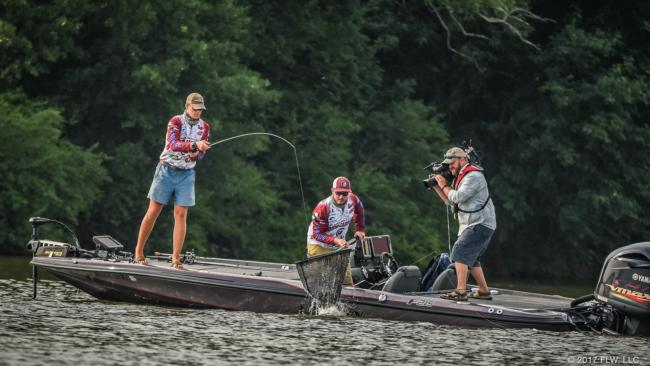 The Gamecocks for sure have 12 pounds now. They're fishing offshore bars along the river, only throwing lures that will get quality bites: jigs, topwaters and square-bills. They work together like a well-oiled machine. When one boxes a keeper, the other keeps casting to keep the school fired.

Gettys Brannon and Patrick Walters have a limit for 11 to 12 pounds. Their two most recent keepers came pretty close together about 35 minutes ago. We’re still working on the photos, but they’ll be along shortly.

Other catches include a 5-plus-pounder landed by the Eastern Illinois team of Jacob Daily and Ian Snowden. That’s their first.

Texas Tech’s Adam Estlack and Matthew Bowden made a small cull recently to move up to about 9 1/2 pounds.

East Texas Baptist University’s Jacob Keith and Brett Clark have just one fish for 3 pounds. They’re in the top 10 now, but need to improve to stay there.

It’s hot, it’s humid and the fishing has slowed down quite a bite. Yet, it’s just a temporary lull. Yesterday, we had several good catches reported around lunchtime, so stay tuned to FLWFishing.com for more updates to come. 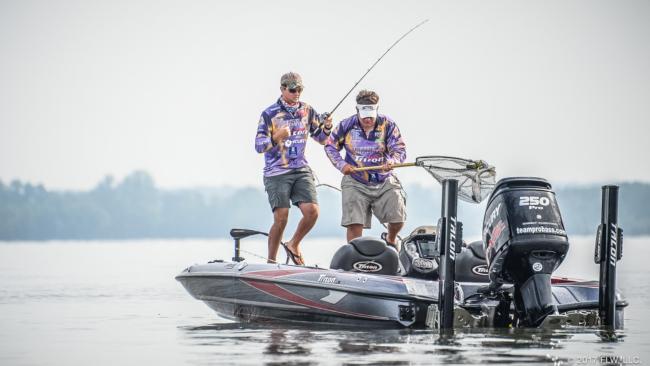 The Decatur area is filling up. Out of the top 10 teams, South Carolina, Kansas State, East Texas, University of Louisiana-Monroe and Bethel are all in that area, and that’s just the ones we know about. The area near the nuclear power plant is also popular, and more teams are working into that area and farther upstream.

Kansas State’s Travis Blenn and Kyle Alsop have finished out their limit fishing around a marina. They should be in good shape to make the cut.

KJ Queen of Bethel just boated his team’s best keeper of the day. They estimate their weight at about 8 pounds, but it could be a bit more.

Tarleton State's Zach Ziober and Dakota Ebare have four keepers. They're cranking an island under one of the power line towers and need a little better day today to move up from 20th into the top 10. They're hunting smallmouths.

Fishing has been steady so far today, even though there’s barely a lick of wind.

FLW’s media crew is currently on the move, hunting other teams in the top 10. Photos of the leaders from South Carolina should be up soon, as well as shots of Kansas State. Stay tuned. 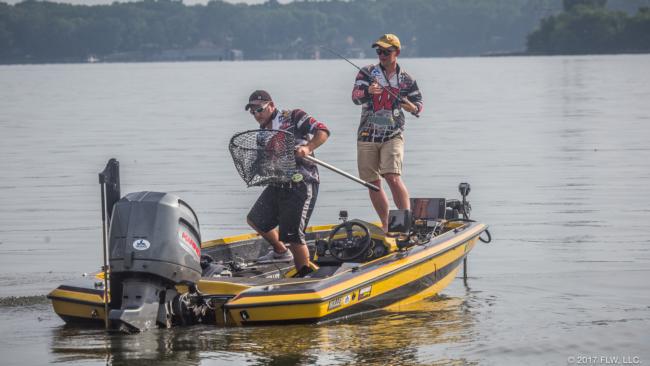 It’s slick-calm and starting to heat up out on Wheeler Lake, but that isn’t stopping the tournament leaders from putting together a nice start to the day. Gettys Brannon and Patrick Walters of the University of South Carolina have three keepers in the boat – one good one and two that are “OK,” according to our on-the-water reporters.

Behind them, Bethel’s Evan Owrey and KJ Queen have a limit and have landed about 10 keepers. They have about 8 pounds but have relocated to an area up the Elk River.

Wisconsin’s Jake Anderson and Bryce Smith have a pair of fish in the boat. They’re fishing jigs and topwater around some main-lake boathouses.

ULM’s Nicholas Joiner and Tyler Stewart weren’t able to locate the same quality fish as yesterday. They have four tiny ones in the boat and are fixing to make a long run upriver to try a shallow area where they found some bigger bass in the bushes in practice.

Kansas State anglers Travis Blenn and Kyle Alsop have three keepers, and two are good ones. They’re also working on the main lake.

There’s still a light haze hanging over the lake, with more cloud cover than yesterday, but the sun is making its way up high in the sky by the minute. It should be a hot day, but a beautiful one on Wheeler Lake. 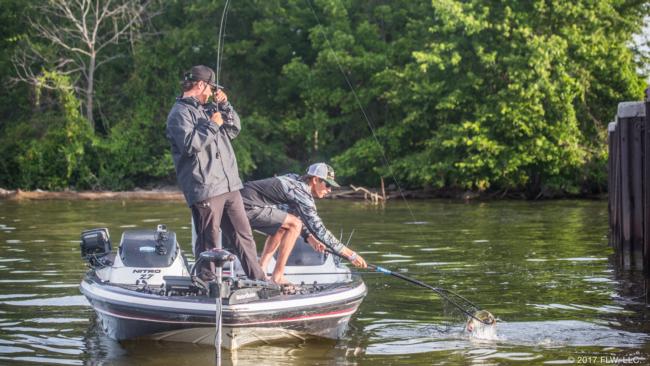 The University of Louisiana-Monroe team of Nicholas Joiner and Tyler Stewart, which started the day in fourth place, is on the board with three small keepers. Joiner and Stewart landed about a half-dozen more that didn’t keep. Yesterday, they said it was the same story, but some bigger fish moved in mid-morning, resulting in their 15-pound, 4-ounce limit. They’re working around a bulkhead on the main lake, flipping Texas rigs and finesse plastics.

In second place, Evan Owrey and KJ Queen of Bethel University have three keepers for about 5 pounds. They’re dragging Carolina rigs and creature baits on wobble-head jigs near takeoff.

Tournament leaders Gettys Brannon and Patrick Walters of the University of South Carolina aren’t on the board yet, but they seemed confident this morning. Their only concern is that yesterday after they caught their limit, they weren’t able to get any other quality bites from midday on. All they could catch was fish that barely measured. If their big ones don’t bite early today, they might have to adjust and try a different game plan.

Gettys Brannon and Patrick Walters of the University of South Carolina are hunting their second YETI FLW College Fishing National Championship and the third in a row for the Gamecocks’ bass club. They took the lead on day one with 17 pounds, 3 ounces.

Brannon and Walters did most of their damage by dragging Carolina rigs on offshore structure, which was a popular approach among the top teams on day one. In general, slowly working soft plastics and jigs offshore was the best strategy for postspawn fish in the sunny, slick conditions that had them unwilling to chase reaction baits.

Today, the forecast calls for more of the same weather, and it’s likely that similar tactics will be used. A lot of small fish were hauled to weigh-in on day one. Today, finding the all-important kicker bite is what will separate the teams that make the cut from the rest.

The two members of the winning team will then participate in a fish-off on Saturday on Wilson Lake. The winner will earn a berth in the 2017 Forrest Wood Cup at Lake Murray.

Takeoff each morning is at 6:30 a.m. CT at Joe Wheeler State Park, 4401 McClean Dr., Rogersville, Ala. Weigh-ins will be held at the park on Wednesday and Thursday at 2:30 p.m. Friday’s weigh-in will be held at McFarland Park, 200 Jim Spain Dr., Florence, Ala., at 3 p.m. prior to the day-two weigh-in at the 2017 T-H Marine FLW Bass Fishing League All-American, which is being held concurrently at Pickwick Lake.

The tournament is hosted by the Florence/Lauderdale Tourism Bureau.

The weather on day two is forecast to be similar to day one: sunny, with light winds and a high in the upper 80s. The weekend forecast isn’t as pretty. Storms are likely on Friday and Saturday.

Though Wheeler extends about 70 miles to include about 67,000 acres of water, most of the anglers will focus their efforts this week on the lower half, versus the “river” portion up past Decatur. Last year, the Forrest Wood Cup takeoffs were held up the river near Huntsville, but that area is dirtier due to recent heavy rains and is a long run from takeoff near Wheeler’s lower end.

Traditionally, the Decatur Flats area has been a good area in the main lake, with shells, stumps and natural structure to fish, and the lower end does have offshore ledges to fish. Several large creeks – Second, First and Spring – plus the Elk River are popular areas near the lower end.