It's too close to call at Wheeler Lake 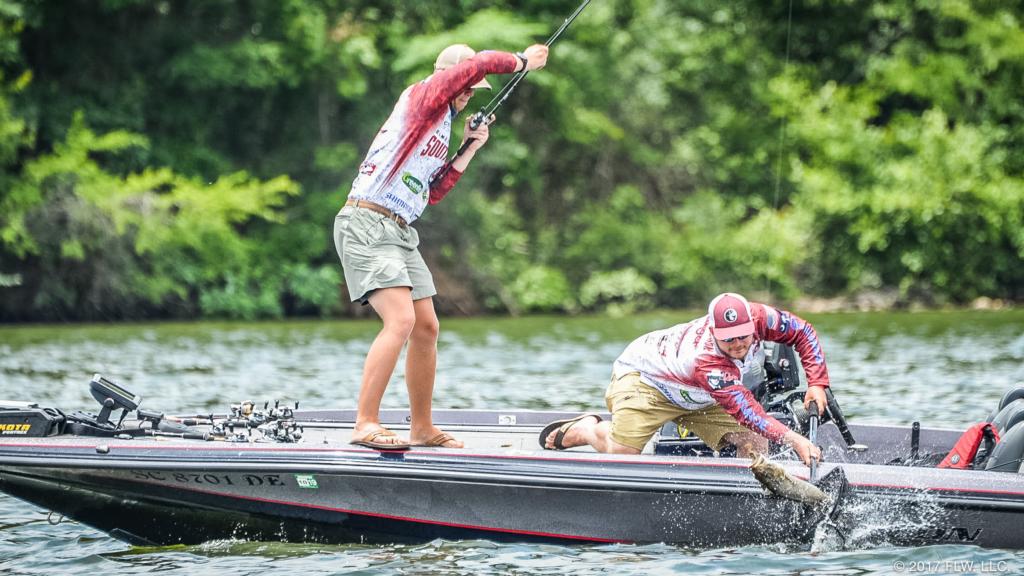 This story will be updated throughout the day with more from day three of the YETI FLW College Fishing National Championship presented by Lowrance C-Map Genesis on Wheeler Lake.

A few things have happened since the last report. South Carolina finished its limit, though we're getting conflicting weight estimates. It's probably around 11 pounds, but we'll see at weigh-in. The Gamecocks are still up the Elk. Meanwhile, Kansas State has a small limit, and by our estimates is neck and neck with South Carolina. It's too close to call.

ETBU went on a tear on an offshore spot and caught several fish in a row with jigs and Carolina rigs, but it needs to cull out two dinks. Estimated weight is about 11 pounds. Bethel has its limit, good for about 8 pounds.

That's it for the updates today. We're signing off the blog, loading the final photos and heading for McFarland Park in Florence, Ala., to weigh 'em up. The teams check in at 1:45. Weigh-in begins at 3 p.m. We hope you'll log on and watch via FLW Live.

South Carolina abandoned its starting spot near Decatur a couple hours ago and ran up the Elk River. Brannon and Walters added another keeper, which makes three.

Slippery Rock, fishing up from Decatur, has a limit for about 7 pounds.

East Texas Baptist University from Marshall, Texas, just landed its fourth keeper. The team says it has lost a couple good ones. A Carolina rig and football jig dragged on offshore areas with hard bottom have been the key baits.

Kansas State doesn't have a big weight, but the Wildcats do have a limit now. They're not slamming the door; just slowly closing it. South Carolina, in third, just made a run up the Elk River. We'll see if they can catch the leaders. The second-place team from Bethel just got keeper No. 2. It's hopping from one grassy island to the next, swimming a jig. Louisiana-Monroe has four fish for 6 or 6 1/2 pounds. Murray State is way back in 10th but has three keepers in the box already. And Oregon is looking for its first. The Ducks went up the Elk River this morning and never got a bite. Now they're mid-lake, gambling on a frog bite around some pads. It nearly worked, as they lost about 3-pounder.

The leaders from Kansas State are sitting on four fish for about 6 pounds. Their move to First Creek to fish brush piles paid off, but they definitely need to upgrade to hold off their competition.

Bethel University is off to a slow start. The team only has one fish for 2 pounds.

The Lamar anglers are in a similar boat. They've got one for 2 pounds and have lost two others. Apparently there are bigguns chasing to the boat but not eating. Also, Lamar had to jump two beaver dams to get into their area. Photos of that are coming.

Mizzou added a fourth keeper fishing docks and is up to 10 or 11 pounds. Another fish just barely missed the minimum length. They actually have no electronics in the boat and are using the Navionics phone app to navigate. It's not stopping them from putting together a strong bag today.

There's a big-time mayfly hatch going on right now. The docks are covered in bugs. Maybe the hatch is going to help the shallow teams and dock flippers.

The Mizzou guys are fishing a dock near a lakefront home where the homeowner is blasting classical music and a big fluffy dog is giving them heck. They said yesterday the house was playing a women's 23 and under bassoon festival. Apparently it helped them relax at 1 o' clock when they only had 10 pounds. They ended up with 12-14.

Kansas State has moved back to "the juice" near takeoff. They're fishing brush piles just behind the takeoff marina. They did some work there yesterday to cull up to 16-9. 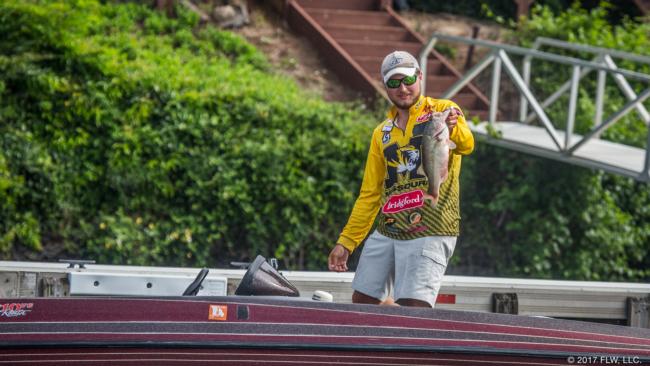 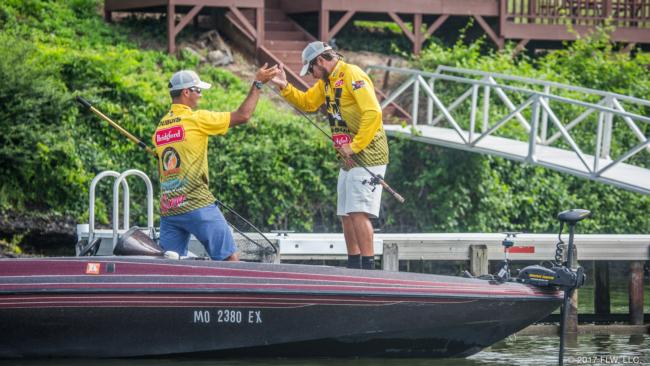 The leaders from Kansas State put keeper No. 2 in the box. They had to switch to flipping docks to make it happen.

Gabriel Dubois and Brandon Heizer of Missouri are also flipping docks. The Tigers had two keepers for about 3 pounds, then added one that'll go at least 4 1/2 pounds. They're fired up. It came off a dock they've fished each day but that hadn't given up a keeper until now. Their fish are relating to very subtle depth changes. This latest catch came from a dock that's in just slightly deeper water than the ones next to it. They think they have a chance to make a big move now that the field has been cut. There's absolutely no one fishing near them, not even locals. Go-to baits are a Zoom Brush Hog and Strike King Rage Bug. They claim that the secret is to leave the weight unpegged. The extra movement of the loose weight helps get bites, though it makes skipping a bit tougher. By the way, they're fishing John Cox style, with no depth finder.

South Carolina moved back out to the main lake, then to the spot that produced their early keepers. They've swapped the topwater for crankbaits and swimbaits.

Right now, eight of the top 10 teams are fishing between the power plant and the 31 bridge. The two outliers are Missouri, which is on the main lake near the mouth of Elk River, and Oregon, which is way up the Elk River. 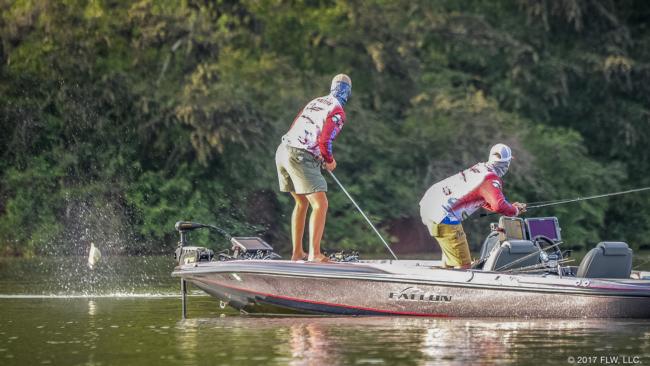 The only real update is that the sun has gone back behind some clouds, and a very slight breeze has picked up. ULM lost a keeper that bit a Ned rig. The cast was made over a steel float that serves to block debris from being pulled into the nuclear plant's intake system. The fish spit the hook before they had a chance to get a net under it.

We're on the run now to catch up with some of the other teams. Stay tuned.

Here's a look at how the top 10 college teams have spread out for the final round. Decatur is a hot area, and no one is really fishing too far past there. 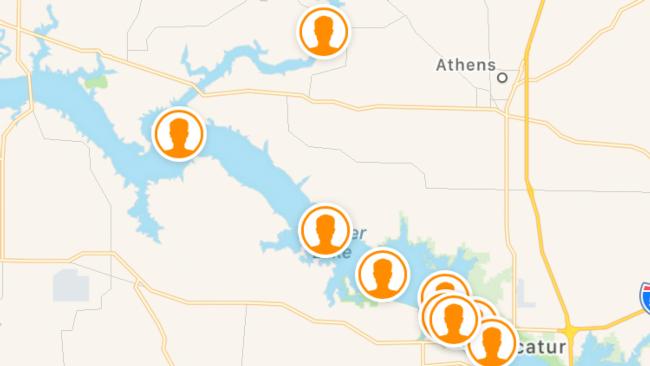 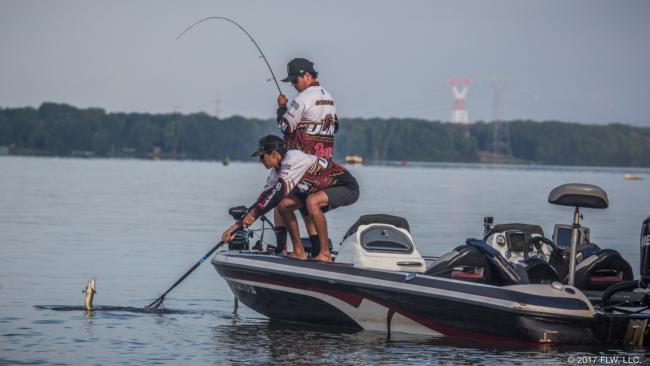 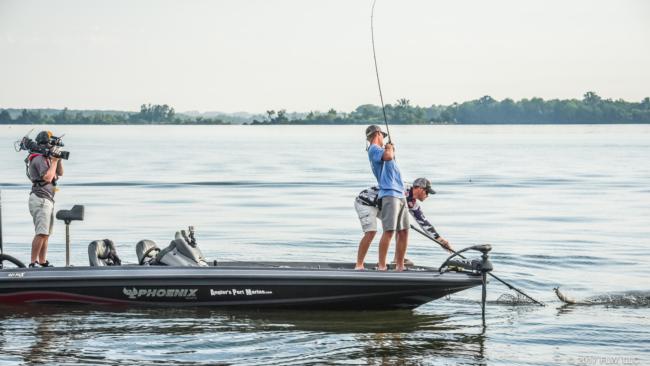 All the anglers have reached their starting areas and are hard at it. The tournament leaders from Kansas State have one keeper in the boat. They’re dragging Carolina rigs on a ledge near Decatur.

South Carolina started on the Decatur Flats fishing topwater but didn’t have any luck, so the team moved south to a ledge and quickly put a largemouth and smallmouth in the boat for about 4 pounds.

The University of Louisiana-Monroe is back at the intake to the nuclear power plant, where it has started each day, and has two in the boat. The anglers started off flipping, but now they’re mixing a traditional flipping bait with a finesse wacky worm. Each option has produced a keeper, but both are small. They had fast action here on day one. Then yesterday it only produced small fish in the morning. An afternoon stop produced a 3-pounder.

Kansas State, Bethel University and the University of South Carolina are locked in a dead heat at the top of the standings, and much of the outcome will be determined early this morning, as the morning bite has been key for just about everyone. All three are starting on main-lake areas and targeting offshore fish.

One bonus today is some cloud cover in the forecast, which might extend the morning bite. Also, K-State and Bethel both reported having an afternoon option for culling up and improving their weight. That will go a long way toward locking down the championship.

There are only 10 on the water today, and it’s still wide open for most of the final-round teams to catch the leaders. Stay tuned all day for updates. Weigh-in begins at 3 p.m. CT.

The two members of the winning team will then participate in a fish-off on Saturday on Wilson Lake. The winner will earn a berth in the 2017 Forrest Wood Cup at Lake Murray.

Takeoff each morning is at 6:30 a.m. CT at Joe Wheeler State Park, 4401 McClean Dr., Rogersville, Ala. Weigh-ins will be held at the park on Wednesday and Thursday at 2:30 p.m. Friday’s weigh-in will be held at McFarland Park, 200 Jim Spain Dr., Florence, Ala., at 3 p.m. prior to the day-two weigh-in at the 2017 T-H Marine FLW Bass Fishing League All-American, which is being held concurrently at Pickwick Lake.

The tournament is hosted by the Florence/Lauderdale Tourism Bureau.

The weather on day three is forecast to be similar to days one and two, but perhaps with more cloud cover. The forecast high is 86, with light winds out of the east.