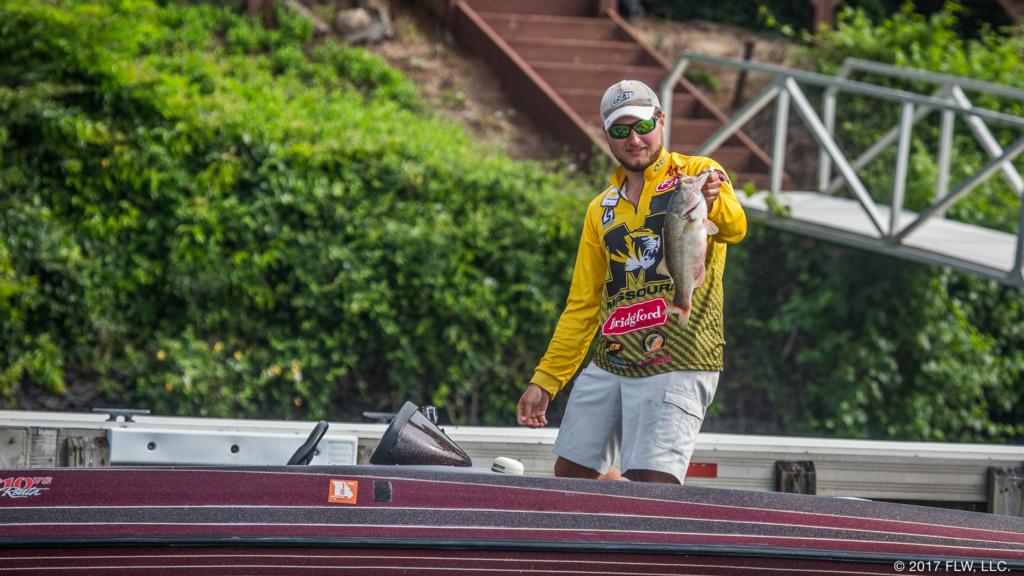 When the YETI FLW College Fishing National Championship presented by Lowrance C-Map Genesis hit Wheeler Lake last week, the college teams scoured the Tennessee River currents looking for postspawn bass all up and down the lake. By Saturday’s final round, the top 10 teams had turned up a variety of interesting patterns to best their competition.

The winning Kansas State team of Kyle Alsop and Travis Blenn relied on a trifecta of patterns that included offshore ledges, flipping docks and dragging brushpiles on the lower end.

Behind them, patterns ran the gamut from fishing topwaters and bluegill beds to targeting water intakes and current breaks. Here’s a look at the patterns of second through tenth. 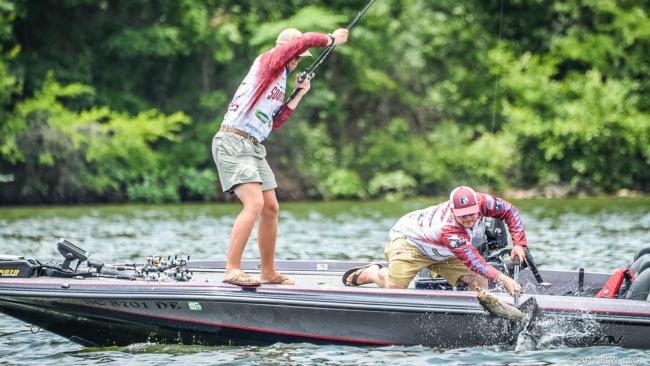 The South Carolina powerhouse team of Patrick Walters and Gettys Brannon nearly pulled off what would have been a third straight College Fishing Nationa Championship title for the Gamecocks and the second title for Walters and Brannon.

The team started the event in the lead after day one, fell to third on day two and rallied back on the final day with a 13-pound, 2-ounce limit, but it was not enough to catch K-State, leaving them in second place.

For most of the week, Walters and Brannon haunted several shallow ledges in the Decatur area with large lures such as a Heddon Super Spook, a  Strike King 2.5 square-bill and ½-ounce Greenfish Tackle Creeper Heads. Brannon used a Zoom Z-Craw on his Creeper Head while Walters stuck with a Zoom Speed Craw.

On the final day, the Decatur area fizzled on the team and they began pulling out all the stops, including a long run up the Elk River and a trip down the lake to fish rocky points in the current.

A last-minute double on the Creeper Heads, providing a couple of substantial culls, gave the team hope that they might be on the right track for another win, but they fell a pound and 12 ounces short with 43 pounds for the week. 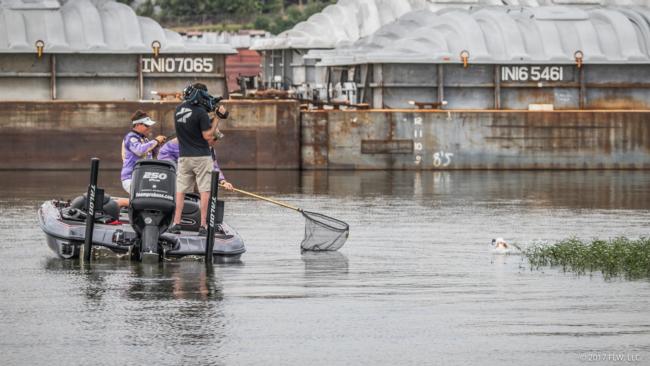 Evan Owrey and Kristopher Queen of Bethel University finished their Championship week up in third place after catching solid 16-pound limits on days one and two.

The team spent the week running up and down Wheeler looking for any individual targets receiving current from the river.

“We’d fish anything along the river – wood, grass, rock, concrete, buoys, day markers – as long as it had current on it, it was fair game,” Queen says.

For lures, the team used Queen Tackle jigs – a company owned by Queen and his dad – that specializes in making tungsten weights and jigs. Their two best lures on Wheeler were the ½-ounce tungsten jig with a Zoom Salty Pro Chunk and a ¾-ounce Queen Tackle Football Swinghead matched with Gene Larew Biffle Bugs. 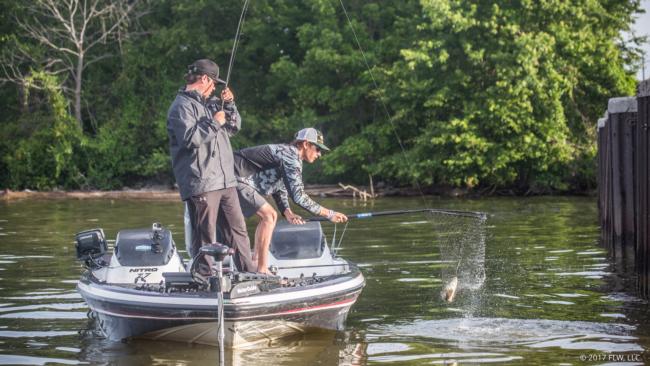 The University of Louisiana-Monroe’s Tyler Stewart and Nicholas Joiner fished one of Wheeler’s most well-known community holes – the intake at the Brown’s Ferry Nuclear Plant – to amass 38 pounds, 5 ounces for fourth place.

To fool the fish at the intake, the team used a ½-ounce V&M Adrenaline Flippin Jig trailed with a V&M Wild Thang Series Cliff’s Wild Craw (black and blue). 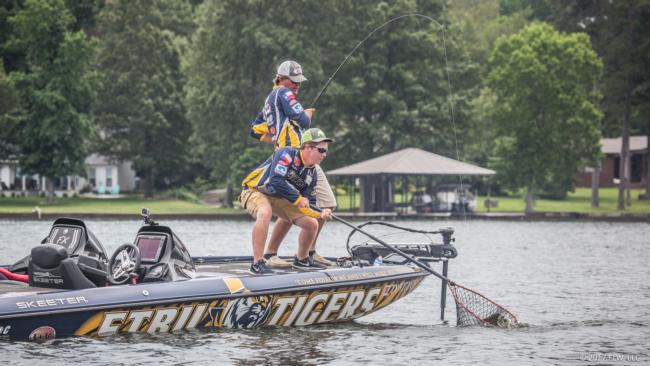 Brett Clark and Jacob Keith of East Texas Baptist University took home the fifth place spot with a total of 38-3.

All week the team fished just two spots. One was a long, offshore ridge in about 18 feet of water, which featured a hard, clay bottom. The other was a major point in a creek lined with deep brush.

To seine the deep spots Clark and Keith relied on a ¾-ounce football jig teamed with a Strike King Space Monkey trailer and a Zoom Ol’ Monster (plum) rigged on a ½-ounce weight. 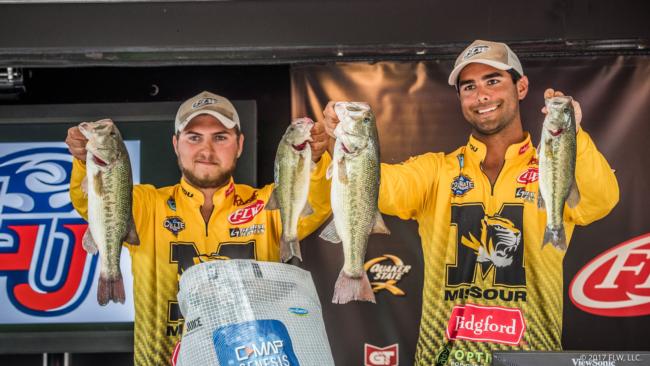 6. University of Missouri climbed to sixth

Gabriel Dubois and Brandon Heizer of the University of Missouri were one of the only teams that increased the weight of their limits each day, climbing from 25th after day one to sixth on the final day. In fact, on the final day they weighed in the largest limit of the day – 13-9 – to bring their total to 37-6.

“It was not so much the docks we were focusing on,” Dubois details. “It was the depth changes under the docks. If there was a quick depth change under certain docks, those were the docks we targeted. Docks that were just flat underneath were not near as good docks that had some contour under them.” 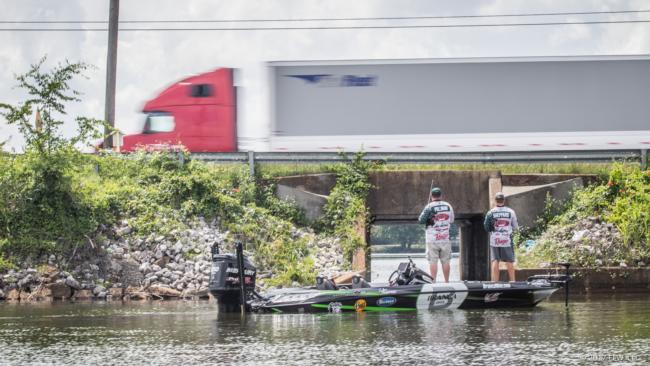 A 3/8-ounce swim jig (green pumpkin) and a topwater frog fished in and around willow grass in the Decatur area accounted for most of their catch.

“We were fishing the deepest grass we could find,” Sheppard says. “Most of that grass was really shallow, but if we could find places in front of the grass that was just a little bit deeper, that’s were the fish seemed to be holding.” 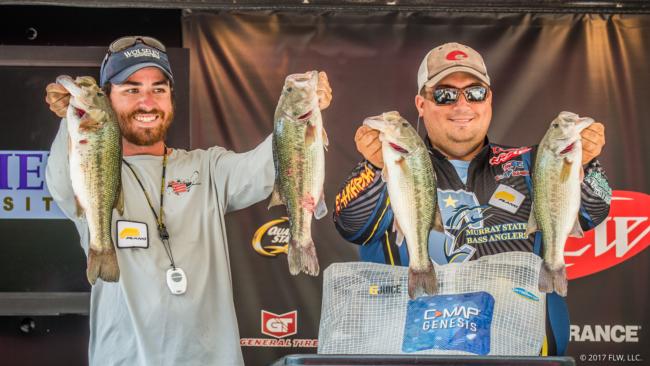 Chandler Christian and Lance Freeman of Murray State University fished offshore ledges and humps in Wheeler’s lower end to finish eigth with a total of 31-13.

The team targeted offshore humps, ledges and roadbeds with a variety of ledge lures including a big spoon, a Zoom Ol’ Monster worm (redbug and plum), a hair jig and a drop shot. 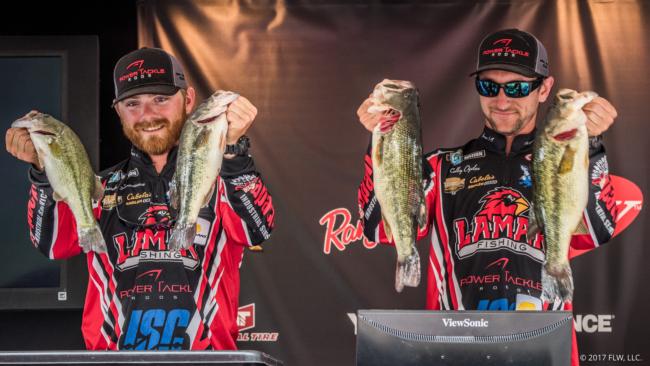 Brandon Simoneaux and Colby Ogden of Lamar University didn’t have much luck finding fish on the main lake in practice, so they decided to do some extreme back country exploring, running their boat as far up into Wheeler’s small creeks as possible. They eventually found one creek that require them to burn across several shallow water flats, then traverse past two beaver dams to reach a spring fed creek channel that was full of spawning bream. Once they noticed a school of resident bass picking the bream off beds in the clear backwater, they decided to make that a part of their tournament strategy.

To catch the bream-eating bass, the team used a Terminator Popping Frog, working it across “slop” adjacent to the beds.

“The bass would come from the middle of the creek to blast the frog on that slop – it was pretty cool while it lasted,” says Simoneaux. “But they were resident fish in a small area and I think we caught them all up the first two days and there wasn’t much left on the final day.” 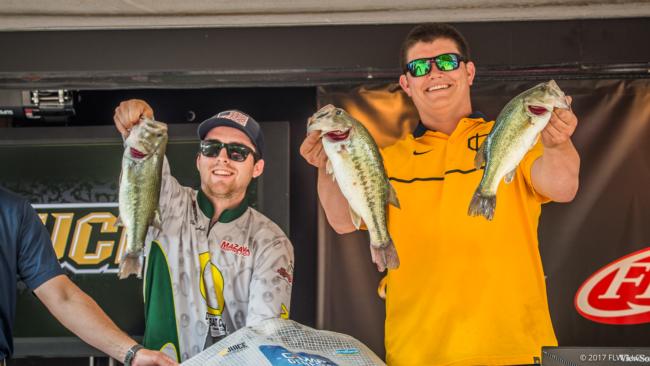 10. University of Oregon rounds out top 10

Ryan Habenicht and Daniel Marshall, all the way from the University of Oregon, rounded out the top 10 at the College Fishing National Championship with a three-day total of 24-6.

The Ducks spent most of their week far up the Elk River pitching a ½-ounce jig with a Strike King Rage Craw trailer as well as a ¼-ounce Frenzy Baits Nail shaky head teamed with a  Zoom Trick Worm to bridge pilings, logs and rocks along the main channel of the Elk.