College teams are chipping away on the Red RIver 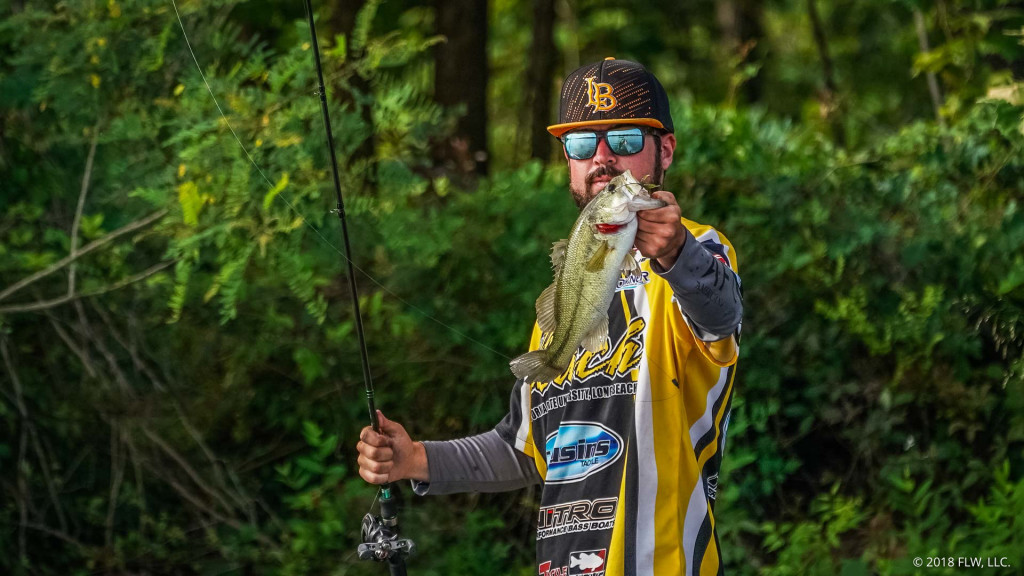 Logistics on the Red River this week are a bear, so please excuse the lack of updates. That said, here are some updates.

Down in Pool 4, Soileau and Freeman of ULM have wrapped up a limit. They had to go back to their starting spot to do it, but now they've got about 10 pounds – day three is going to be mighty interesting.

Elsewhere, Cameron Timok and Dylan Peters of Central College have two in the box. Dalton Childers of Auburn has just one and has caught about 20 drum. Ethan Flowers and Cole Swede of Harding University have two – they say they left them biting early on day one and it was not happening today. Logan Smith and Payton Morgan of Kennesaw State have just three it's late, so they may fall out of the top 10. Matthew Lamastus and Dylan True of UT-Martin have two skippers. Harrison Hopkins and Ryan Antee of LSU-Shreveport have a small limit.

The University of Nebraska team just caught a giant 5-pounder. That gives Charlie DeShazer and Jackson Ebbers a serious upgrade and should solidify their spot in the top 10. 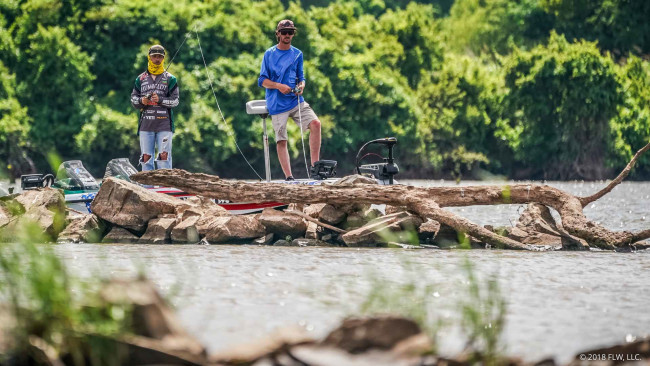 ULM has caught two more fish to bring their total up to four. Now they have 9.5 lbs. in the livewell. They will be looking good for tomorrow.

Michael Dunn of the University of Pittsburg has two keepers – one being decent. He is fishing in a highly pressured area. He said a lot more short fish are being caught today.

The Kent State team of Tenner Ward and Alec Gabriel said their day has “been tough.”

University of Nebraska’s Charlie DeShazer and Jackson Ebbers just filled out a small limit. They could be well on their way to fishing day three.

Justin Mayfield and Colby Hays from Campbellsville University have three keepers. That puts them with one more than they managed all of yesterday.

UW – Platteville’s Grand Ehlenfeldt and Brett Stanek have matched their total from yesterday with three keepers. 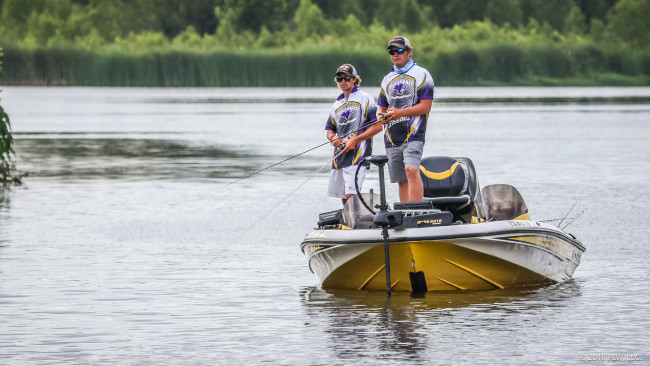 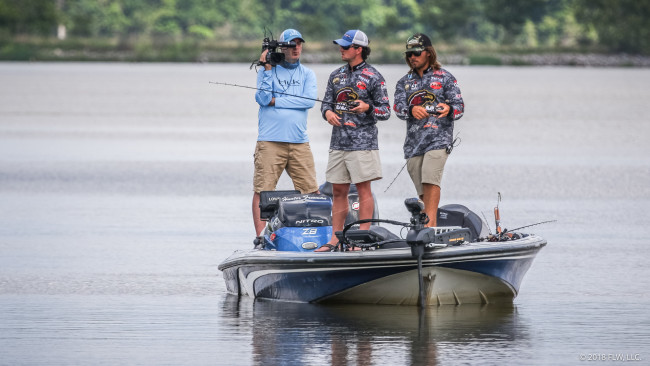 Sneed State Community College anglers Brandon Matthews and Nathan Doss have two so far. One of their keepers is a good one.

Northwestern state got 3 bites in one stretch. Lost a keeper at boat. Others were short

Andrew Warbington of the University of West Alabama hand lined a keeper this morning after his spool broke. They are currently fishing lily pads.

The Mckendree University team of Joseph Bruener and Nate Doty have two-small keepers.

Thomas Soileau and Hunter Freeman of ULM are still stuck on two fish. They have made a move to a different spot since the last upate. They are really taking their time to thoroughly fish their spots. 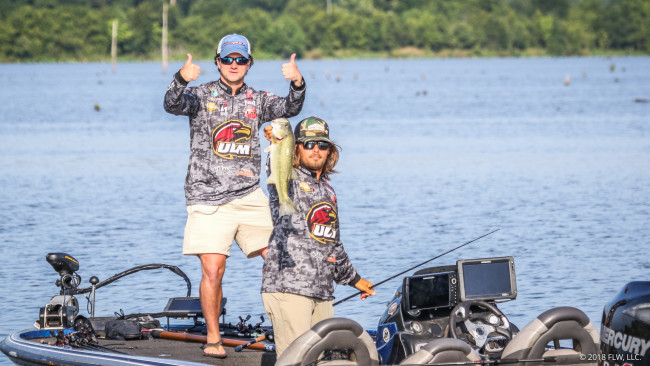 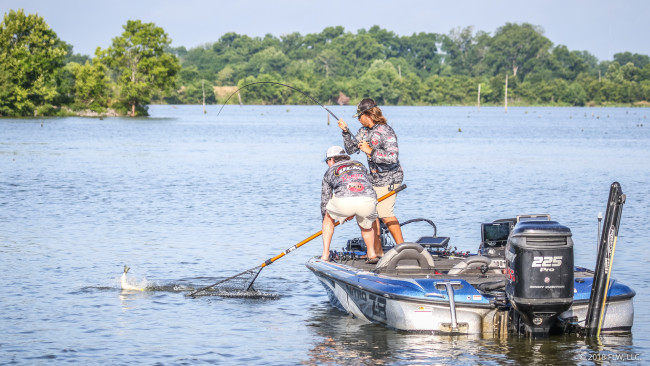 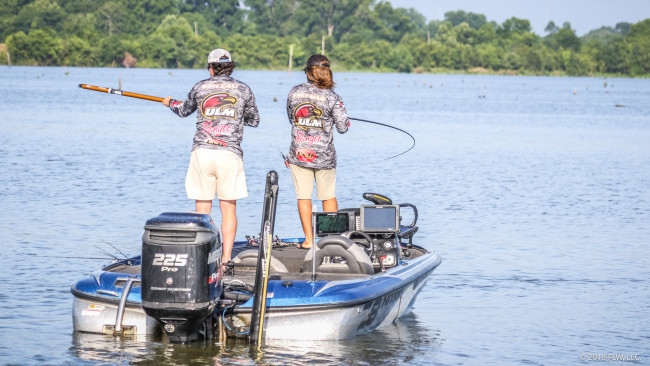 ULM’s Thomas Soileau and Hunter Freeman are getting things together. The duo now has a 4-pounder to add to the livewell. They caught the fish cranking fairly shallow water. Apparently, the spot they caught it on was their limit spot. Now with a solid kicker in the boat they should be able to make a nice limit throughout the rest of the day.

California State Long Beach’s Cole Thomas and Via Thao have landed two keepers. They have also lost two nice fish. They caught their keepers from cranking and flipping. Their overall weight should be pushing four pounds now.

Northwestern State’s Hunter Malmay and Robert Jones have their first-small keeper. They said their day bite will pick up around 10:30 a.m.

The day one leaders from ULM are not off to a fast and furious start. We caught up with them in a Pool 4 backwater. They currently are dragging baits on a point within the backwater. They have one keeper to show for their efforts.

Kennesaw's Logan Smith and Payton Morgan are still stuck on zero. Due to boat draw they have missed their morning flurry.

Charlie Deshazer and Jack Ebbers have two-dink keepers so far. They are currently working a highly pressures rock bank with spinnerbaits.

Heading south through the lock to Pool 4 was very popular this morning. When we arrived to the lock there were 30+ boats waiting to get through. We will have an update on the teams in Pool 4 shortly.

The Adrian College team of Nicholas Czajka and Jack Hippe have one fish in the boat. It was landed right outside takeoff on their honey hole.

Penn State’s Derek Horner and Maurice Hudson only have a 9-pound drum to show so far this morning. They are fishing the same rock edge in Pool 5 as Kennesaw State’s Logan Smith and Payton Morgan.

All throughout the day yesterday we noticed that many teams were fishing near takeoff. To start the day, we rolled up on a few Adrian College teams fishing side-by-side on a point right next to Red River South Marina. We have not seen any fish caught, but with the common attraction to the area expect someone to find them. 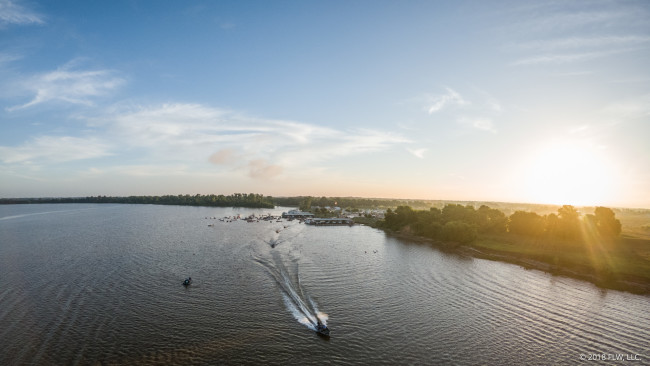 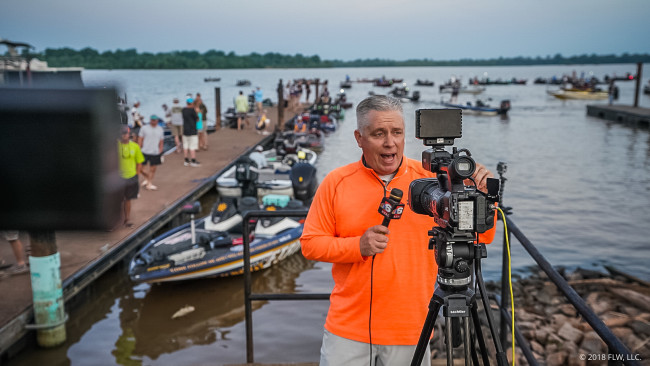 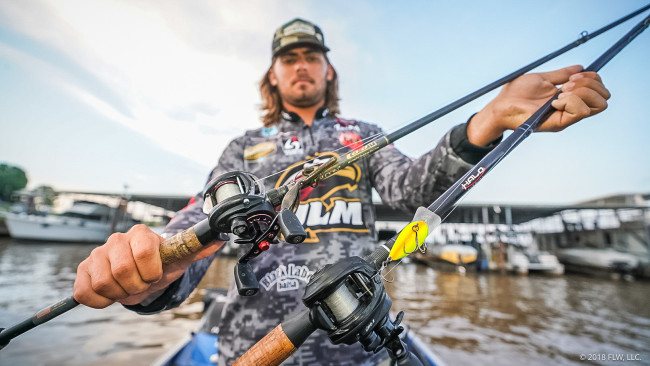 The full field is back on the Red River for the second day of the YETI FLW College Fishing National Championship presented by Lowrance C-Map Genesis. A good chunk of teams found unforeseen success on day one. Leading the way, the University of Louisiana-Monroe duo of Thomas Soileau and Hunter Freeman seem very confident in their pattern. We will keep a close eye on them throughout the day to see if they can keep their momentum rolling. At the same time, many other schools are within striking distance of taking over the lead, and there are a solid 30+ teams within easy range of the top 10 cut.

Back-to-back days of mid 90-degree weather will truly put these anglers to the test. With the top 10 cut looming, expect these teams to lay it all out in the Louisiana sun.